SPECIAL EDITION: “The More Nefarious Form of Corruption is That Which is Legal” -- Words of Power Interviews David Sirota

SPECIAL EDITION: “The More Nefarious Form of Corruption is That Which is Legal” -- Words of Power Interviews David Sirota

"We would like to believe that corruption is just about illegal vote buying and bribery a la Duke Cunningham and Tom DeLay, but the more nefarious form of corruption is that which is legal. Today, the political debate is artificially limited by Big Money interests to make sure that the discussion of any public policy results only in one or another policy that appeases and enriches Big Money.” David Sirota, Words of Power Interview, 7-16-06

Money has so corrupted the democratic institutions at the heart of the American experiment that the future of the experiment itself is in grave doubt. Montana-based political strategist, David Sirota, documents this abomination in his starkly powerful, and yet disarmingly accessible book, Hostile Takeover: How Big Money & Corruption Conquered Our Government—and How We Take It Back (Crown 2006). 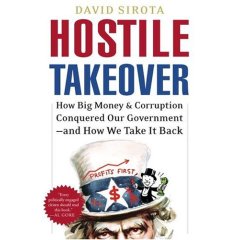 The inaugural Words of Power Interview, “Until this issue is burning on the mind of every citizen”, featured five burning questions for Mark Crispin Miller , the maven of media and election reform, whose fierce wit and perspicacity have done so much to reveal election fraud and mainstream news media complicity in the US.

This second Words of Power “Special Edition” Interview features five burning questions for David Sirota, and serves as a worthy follow-up, because Sirota, like Crispin Miller, has taken the road less traveled (or at least the road not as well-paved).

In Hostile Takeover, Sirota explores the core economic and quality-of-life issues in the US body politic, from wages, debt, pensions, health care and prescription drugs to energy, unions and legal rights – but not from the perspective of a Beltwayistan politico or a news media pundit propapundigandist.

“Let’s be honest,” Sirota writes, “most books about politics aren’t written to explore the real-life day-to-day economic challenges facing the ‘regular people’ demographic.” Because, as Sirota concludes, “Very few political operatives, politicians, or pundits actually want to explore those challenges, because exploring them would ultimately force them to admit that the political system they venerate is totally corrupt.”

Each chapter of Hostile Takeover includes an uninhibited, common sense analysis of a particular range of issues (sans nuance, parsing and newspeak), and concludes with a list of bold, substantive solutions.

For example, in his chapter on Energy, Sirota writes, “Experts believe a supply crisis is coming sometime in the next twenty to forty years...Despite this troubling reality, our laws actually encourage more and more energy consumption...The reason we keep pursuing this clearly misguided policy is obvious--the energy industry and the politicians it bankrolls are making a killing off the average consumer....”

Sirota then offers two fistfuls of viable solutions, from “Make every car in America a flexible fuel vehicle” (“A federal law forcing all vehicles to be flexible-fuel-ready would be a major step toward getting America off foreign oil and onto a cheaper product that can be made right here”) to “Buy out the profiteers.” (“During the 2001 California energy crisis, Los Angeles was one of the few cities where citizens weren’t gouged by exorbitant prices....the city government owned the power companies and was thus able to insulate citizens against corporate profiteering”).

Words of Power: The premise of your new book, Hostile Takeover, is profoundly important. Without an understanding of how and where the money flows, and what it corrupts along the way, there will be no future worthy of the Founders' vision. Without an understanding of what has happened, we cannot begin to come to grips with its impact on public policy concerning everything from clean air, clean water, mine safety, and the minimum wage to energy independence, privacy rights and the future of the Internet. Hostile Takeover is an invaluable handbook. It should be used to inform progressive political analysis, and establish a 21st-Century agenda for the Democratic Party. Could you summarize its central theme in a few sentences?

David Sirota: The theme of Hostile Takeover is simple: that Big Money has bought our government. By that, I mean that our government's policies AND its rhetoric is bought. We would like to believe that corruption is just about illegal vote buying and bribery a la Duke Cunningham and Tom DeLay, but the more nefarious form of corruption is that which is legal. Today, the political debate is artificially limited by Big Money interests to make sure that the discussion of any public policy results only in one or another policy that appeases and enriches Big Money.

Words of Power: The impact of corporate money on the political agenda and governance style of the Republican Party is painfully apparent to anyone to the left of Ann Coulter at this point, but going deeper, could you please elucidate its impact on the political agenda of the current Democratic Party establishment, and how it has led the Party to under-achieve in its role as an opposition party over the last six years? For example, the Party establishment’s timidity on the national security implications of global warming, its acquiesce on the Bush-Cheney contempt for the US Constitution, its support for the invasion and continued occupation of Iraq, etc. -- how does corporate money influence the Democratic Party's forfeiture of leadership on these vital issues? And perhaps, looking back at the 1990s, how did it impact the Democratic Party establishment's governance during the Clinton administration. (The Telecommunications Act of 1996 comes to mind).

David Sirota: One of the major reasons the Democratic Party still has an image of standing for nothing is because it is paralyzed by Big Money and refuses to take strong party positions on the core economic issues that confront America. The Democratic Party has been complicit in passing corporate-written legislation like the Bankruptcy Bill, the Class Action Bill and the spate of "free" trade deals that have decimated American workers.

Words of Power: Could you talk a bit about the knee-jerk accusation of "class warfare," e.g., “well, now that sounds like you’re advocating class warfare,” which is hurtled at anyone who brings up the plight of the working class, or the working poor, or the extreme poor, in America? In the public discourse, and on the airwaves especially, it seems to be used, by what I call the propapundigandists, as a coded message, saying "don't go there, or the money will dry up.”

David Sirota: Whenever someone attacks the progressive movement for waging "class warfare," what that person is saying is "uncle." It means they have no answer to the charges being brought. The truth is, the super wealthy and large corporations are waging their own class war on the rest of us - and no matter how hard they try, that fact cannot be hidden.

Words of Power: In the course of my recent interview with Mark Crispin Miller, he said: "US politics is now based not on voters but on donors, just as the media here is based far less on readers/viewers/listeners than on the media cartel's advertisers and big shareholders. The point here is that we need election reform and campaign finance reform and media reform. There is no separating them. What we need amounts to revolution." I want to focus on these issues in my last two questions...so first, David, could you give us your view of what real election reform and real campaign finance reform would look like? What should we be pressing our elected representatives to pursue in their legislation?

David Sirota: We must attack the intersection of money and politics in a way that is constitutionally viable. The Supreme Court has ruled that money is speech, and I would suggest we accept that ruling if we want change in the near future. We can accept that ruling and get real reform - it's called voluntary public financing of elections. Public financing of elections - as is done in Maine, Connecticut and Arizona - is a way to give candidates who opt into the system a way to run for office and get resources for that run that don't come with the expectation of legislative favors. The system, in other words, cuts off the real driver of corruption - private money going into the system, and legislative favors going back out.

Words of Power: And finally, what would real media reform look like? What should we be pressing our elected representatives to pursue in their legislation on this desperate need?

David Sirota: We need to reinstate the FCC's fairness doctrine and its media ownership rules. And we need to press hard for net neutrality.

In the conclusion to Hostile Takeover, Sirota writes: "The only difference between today and yesteryear is that in the past eras we tired to divide the corporate raiders from the government regulators--a divide designed to blunt the sharpest edges of unbridled capitalism. That divide has been eliminated thanks to the hostile takeover...But if history is any guide things are about to change. The history of America is not a story of pessimistic, passive people who sit back and get fooled. It is the story of a tenaciously optimistic people who stand up and fight back...."

SPECIAL EDITION: “Until this issue is burning on the mind of every citizen” -- Words of Power Interviews Mark Crispin Miller

Hard Rain Journal 6-29-06: What are the Global Implications of Neo-Totalitarianism in both US and China? Will The New York Times Fight for Freedom?

Words of Power #22: Election Fraud As Information Warfare, and a National Security Issue

Words of Power #13: What You Need To Know About The Port Security Scandal