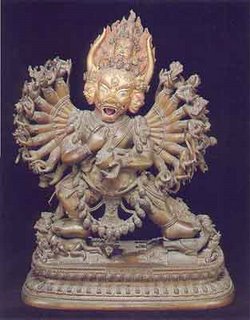 Now, O Yamantaka, raise the weapon of karma over his head -- Spin the wheel three times fiercely over his head. Your legs of truth spread apart and eyes of method and wisdom wide open, with your fangs of four powers bared, strike the enemy. Dharmaraksita, The Wheel of Sharp Weapons (Mind Training: The Great Collection, Wisdom Publications, 2006)

Words of Power #29: The Dalai Lama and The Blade Runner, Spiritual Challenges of the 21st Century Security Crisis, Part IV

A warrior's greatest struggle is within his or her own heart and mind. There is the great danger of dehumanizing your enemy and of succumbing to negativity and mirroring the cruelty and ignorance you seek to vanquish. It is a treacherous path.

A 21st Century Buddhist
Each morning, in the first hour or two of the teaching, His Holiness spoke extemporaneously, and shared his personal view.
He spoke of being a "21st Century Buddhist" and of choosing the definitive over the provincial. He spoke of having "no cosmology," because even the concept of "the three times" has become problematic. He emphasized cultivating emptiness and bodhicitta. He said that the seeds of enlightenment reside in our minds. He said that there was a casual continuum of qualities, characteristics and potentialities -- a natural body of clear light obscured by mental pollutants that result in afflictions, i.e., aversion and attachment.
From the distorted understanding of reality arises a distorted intelligence. Rooted in fundamental ignorance, grasping at things and events as if they had a reality of their own, we have not penetrated the clear light mind.
Denigration of what is real and reification over what is real, both must be overcome, he said. But they cannot be overcome through prayer, wishful thinking or aspiration. They must be overcome through cultivating the view of emptiness and gaining insight into the true nature of reality. He urged critical analysis. Refine your eyes with intelligence through perfect reasoning, he said, to confirm the central points of Buddha's teachings.

Invoking the Death Slayer
The text His Holiness selected for this three-day event is titled "The Wheel of Sharp Weapons" or "The Wheel Weapon Striking at the Vial Points of the Enemy." According to the Colophon, the great yogi Dharmaraksita composed the teaching while living "in a jungle where terrifying animals of prey roam free" and "undertook its practice in the terrifying jungle of this degenerate age."
"The Wheel Weapon..." invokes Yamantaka. (In Sanskrit, "Yama" means "death," "antaka" means "terminator.") The buffalo-headed Yamantaka is wrathful manifestation of the Bodhisattva Manjushri, who personifies wisdom.
As I listened to the Dalai Lama's discourse on the text itself, it occurred to me that the one hundred and sixteen stanzas of "The Wheel Weapon..." break down into three distinct movements.
In the first movements (stanzas 1-48), the text underscores personal accountability for all that befalls us, e.g., "When I am powerless and suffer in servitude to others, it is the weapon of evil karma turning upon me for being hostile to the weak and subjugating them; from now on I will employ my body and life in the service of others."
In the next movement (stanzas 49-89), it analyzes the root causes of all that befalls us, e.g., "Habituated to attachment and anger, I insult all those who oppose me; habituated to envy, I slander and denigrate others--Dance and trample on the had of this betrayer, false conception! Mortally strike at the heart of this butcher and enemy, Ego!"
In the third movement (stanzas 90-116), the glint of the whirling "Wheel Weapon" reflects the depth of the reality, e.g., "Now I place my mind on this truth in total equipose, what is there that retains definite appearance? What exists and what does not exist? What thesis is there anywhere of is or is not."

The Iron Wheels Will Come...
One particularly poignant, haunting stanza of "The Wheel Weapon..." reads: "When my material resources waste away, it is the weapon of evil karma turning upon me for being disrespectful toward others' resources; from now on I will help others find what they need."
A wise old man I had the good fortune to share some time with told me that one of the "high lamas" had told him that help would come at the hour of humanity's direst need and greatest danger. He said that when hope seemed all but lost, the "iron wheels" would be loosed from Shambhalah and all the terrible weapons would be neutralized.
As I discretely circumambulated the Beacon Theatre, it occurred to me that one of the "iron wheels" had just been loosed upon the world.
I understand why the Dalai Lama chose this text, at this time....May its subtle, but powerful influence strike deep.