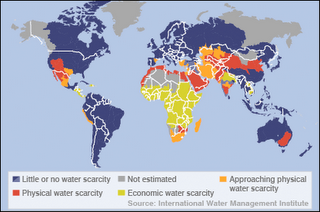 As I have written before, water, both its scarcity and its unhealthiness, would be an urgent global issue even without the added dimension of sweeping, rapid climate change.

The US mainstream news media is living in a dream and promoting that dream to its consumers. But the dream is turning into a nightmare. You will not be able to press the mute button or switch the channel.

Here are some recent stories that underscore the challenges:

A new report from the United Nations Development Programme has demanded a big increase in spending to provide clean water.
The UNDP wants another $4bn (£2bn) a year spent, and says that water has not received the attention it deserves.
Water-borne diseases such as diarrhoea kill far more people than HIV/Aids and malaria combined, it said.
And the difference is particularly stark for children: water-borne diseases kill five times as many children as HIV/Aids.
The report says that water is a key part of human development - and warns that, in particular, sub-Saharan Africa is lagging behind the rest of the world in the provision of basic services.
The report says that 2.4 billion people in the world do not have access to safe sanitation.
Some steps are simple and can have dramatic results - just putting in a safe standpipe can reduce mortality by 20%.
But Kevin Watkins, the report's author, says that the world needs to think on a much bigger scale than this.
He says a similar initiative is needed as that carried out 100 years ago in major European cities, including London, to provide water and sewage treatment. David Loyn, UN urges end to 'water apartheid,'BBC, 11-9-06

Climate change threatens supplies of water for millions of people in poorer countries, warns a new report from the Christian development agency Tearfund.
Recent research suggests that by 2050, five times as much land is likely to be under "extreme" drought as now.
Tearfund wants richer states to look at helping poorer ones adjust to drought at next month's UN climate summit.
This week the UK's climate minister said he was confident of reaching an deal on adaptation funds at the talks.
There was an "urgent need" for such measures, Ian Pearson told a parliamentary committee.
The Tearfund report, Feeling the Heat, urges donors to ramp up assistance quickly. Other charities are likely to make similar pleas in the run-up to the Nairobi summit, which begins on 6 November.
Citing research by the Oxford academic Norman Myers, Tearfund suggests there will be as many as 200 million climate refugees by 2050. Richard Black, Climate water threat to millions, BBC, 10-20-06

The alarming extent of water scarcity across the world is detailed in a map compiled by a leading environmental think tank. It shows two key types of scarcity; water is said to be either physically scarce or economically scarce.
The map appears in a report by the International Water Management Institute (IWMI) on the use of water in agriculture.
Agricultural activities consume most water on a worldwide basis. Map details global water stress, BBC, 8-21-06

Hard Rain Journal 8-4-06: No Blood for Water? Are Lebanon & Tibet Being Robbed of The Most Vital Resource?