Human Rights Update 8-9-07: Indigenous People's Day -- "The white roots from the Tree of Peace go in the four directions."

A map is not the land; it is a picture of the land.

A history book is not a people; it is a story of a people.

A map is only as accurate as its maker.

A history is only as honest as its author.

The reality of a land and a people can only be known from the inside out.

“The United Nations Declaration on the Rights of Indigenous Peoples represents the minimum standards for the survival, dignity and well-being of indigenous peoples. Many still live under the most oppressive and marginalized conditions and yet they are also the ones who are providing solutions to serious world problems such as climate change and the erosion of bio-cultural diversity,” stated Victoria Tauli-Corpuz, Chairperson of the Permanent Forum on Indigenous Issues. INTERNATIONAL DAY OF WORLD’S INDIGENOUS PEOPLE ON 9 AUGUST TO RECOGNIZE CONTRIBUTION TO ENVIRONMENTAL PROTECTION, COMBATING CLIMATE CHANGE, United Nations

Les Malezer, the Chairperson of the Indigenous Peoples Caucus ... expressed his concerns about the continuing opposition to the adoption of the declaration by some Member States, seven of which now want to restart the drafting of the Declaration - Canada, Australia, New Zealand, Russia, Suriname, Guyana and Colombia. “We would like to see the human rights records of these states, in relation to treatment of Indigenous peoples, and in particular the most recent reports of the human rights treaty bodies, to be taken into account in conjunction with their views on the Declaration”, Mr. Malezer said. ... The United Nations itself has been betrayed, he said, by some states that refuse to be held accountable for their performance and actions in relation to Indigenous Peoples. ... Mr. Malezer is a descendent of the Gubbi Gubbi and Butchulla peoples of the region of the Mary River and Fraser Island on the sub-tropical eastern coast of Australia. Elisa Burchett: U.N. Declaration on the Rights of Indigenous Peoples Due for Formal Adoption, U.N. OBSERVER & International Report, 8-8-07

Meanwhile, on the other side of the cutting edge, Hugo Chavez, the Bolivarian anti-hero, is hosting representatives of 40 indigenous nations for an International Congress of Indigenous Peoples.

Two women, Kahentinetha, an elder and Karenhahes, Bear Clan Mother are speaking for the Mohawk nation.

Here are some excerpts from their statement "in Defence of the Planet”, outlining "a new paradigm for human existence" --

Our perception is that the material world is to be shared and distributed equally. Our ancestors knew that when a hunter went into the woods and brought back a deer, the entire community shared in that bounty. This is common to all Indigenous peoples of the world. Those who have fallen away from these simple concepts and now practice colonialism must be brought back into the human family and saved from themselves. ... Recently South America was visited by the President of the United States and the Prime Minister of Canada. They both avoided Venezuela because they can’t understand what’s happening here and it frightens them. These are emotionally disturbed people. They don’t know how to exist on a level of equality with their fellow human beings.
They do not represent us or even the people of their countries. They follow habits of thought that have been proven to be ineffective and destructive to the continuation of human life on earth. ... As elders of our nation, we are dedicated to work in the best interests of our people. Each of us has power in our lives. We have a duty to spread the Kaianerehkowa throughout the world. The white roots from the Tree of Peace go in the four directions. Those who wish to find shelter may trace its roots to the source. My nation and Six Nations Iroquois Confederacy are in need of this alliance at this time. ... (Image: Iroquois Confederacy Flag) 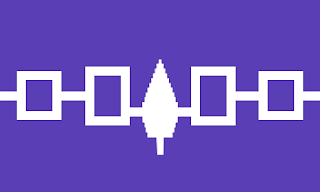 People always feel threatened by a new paradigm. We can expect many attacks from the colonial powers. We do not use guns but they point theirs at us. They don’t know what else to do. The young, the poor and even the middle class in the colonized countries are all suffering from the same insecurity and dislocation that has been imposed on us. They will join us once they understand. If everyone doesn’t relearn how to look after the earth and each other, there will be nothing left for anyone to eat; no clean water to drink; and no clean air to breathe. The colonial commercial exploitation of the environment has been taken to such extremes that human life itself is in peril. We can work together to clean up the mess we have created as human beings and make the earth healthy again. MOHAWKS TO ATTEND INTERNATIONAL CONGRESS OF INDIGENOUS PEOPLE IN VENEZUELA: THE BEARS ARE MOUNTING THE SILVER EAGLE TO MEET THE CONDOR, Mohawk Nation News, 8-5-07

To follow Indigenous rights issues more closely, and learn what you can do, visit --