Image: Nero and the Roman Senate 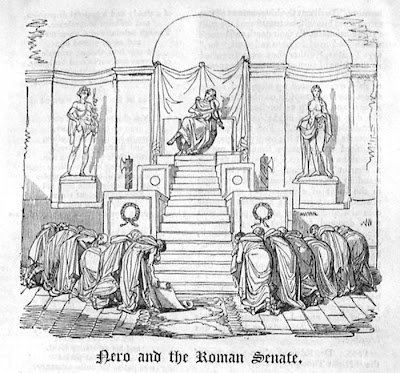 Two recent statements -- one from former White House Press Secretary, Scott McClellan, and one from that darling war monger and class warrior, Tom Friedman -- highlight the depravity of the Beltwayistan political establishment, the US mainstream news media and the corporatist interests that both groupings pimp for.

In his kneel-and-tell book, What Happened, McClellan has confessed:

"The most powerful leader in the world had called upon me to speak on his behalf and help restore credibility he lost amid the failure to find weapons of mass destruction in Iraq. So I stood at the White House briefing room podium in front of the glare of the klieg lights for the better part of two weeks and publicly exonerated two of the senior-most aides in the White House: Karl Rove and Scooter Libby," McClellan wrote. "There was one problem. It was not true. I had unknowingly passed along false information. And five of the highest ranking officials in the administration were involved in my doing so: Rove, Libby, the vice president, the president's chief of staff [Andrew Card] and the president himself." (Think Progress, 11-20-07)

That was yesterday's revelation.

Yes, Scott McCellan, may be one of those who aided and abetted in the betrayal of US secret agent Valerie Plame's identity (an act tantamount to treason, whether it is ever acknowledged as such or not) has confessed his role in the cover-up, and yet this morning, not a mention on the front pages of the New York Times or the Washington Post.

It should be headline, but it was not even below the fold.

What the New York Times did include, on its Sunday op-ed page, was Tom Friedman's latest "punditry":

I have no idea who is going to win the Democratic presidential nomination, but lately I’ve been wondering whether, if it is Barack Obama, he might want to consider keeping Dick Cheney on as his vice president. […]
And that brings me back to the Obama-Cheney ticket: When it comes to how best to deal with Iran, each has half a policy — but if you actually put them together, they’d add up to an ideal U.S. strategy for Iran. Dare I say, they complete each other. […]
In sum, Mr. Obama’s instinct is right — but he needs to dial down his inner Jimmy Carter a bit when it comes to talking to Iran, and dial up a bit more inner Dick Cheney. Tom Friedman, Channeling Dick Cheney, New York Times, 11-18-07 (Think Progress, 11-19-07)

Forget Friedman's role in selling you on the looting of the US economy under the guise of "fair trade and globlization." (For more on this aspect of his wet work, read David Sirota's brilliant Open Letter to Tom Friedman.)

Forget Friedman's role in selling you on the invasion and occupation of Iraq, and then keeping you placated with his "another six months" spin (something so absurb that it added another word to our lexicon -- "a Friedman") while thousands more men and women of the US military were killed and maimed.

Just think about what it means that Friedman would invoke Cheney as some sort of example of political strength or clarity of strategic thinking.

Such a notion reveals Friedman's depravity, with a chilling finality.

Cheney, the man whose office, according to Patrick Fitzgerald's statement in open court, has "a dark cloud" hanging over it in regard to the betrayal of US secret agent Valerie Plame's identity?

Cheney, the man who cooked the intelligence on Iraq, and is doing so again on Iran?

Cheney, the man whose secret, pre-9/11 energy plans, drawn up with Ken Lay, divvied up the oil fields of Iraq?

Cheney, the man who, according to the sworn 9/11 commission testimony of Transportation Secretary Norm Mineta, sat on his hands as a highjacked plane flew through Beltwayistan's restriced air space? (Was he hoping it was aimed at the Capitol Dome?)

Cheney, the man who threatened Sen. Paul Wellstone (D-MN) with "dire consequences" if he opposed the invasion and occupation of Iraq? (Wellstone died in a small plane crash shortly before the 2004 election, which he was certain to win.)

Cheney, the man who, as a member of Congress, voted against Martin Luther King Day?

Cheney, the man who, as a member of Congress, voted against a resolution to free Nelson Mandela from prison?

Cheney, who shot a fellow hunter in the face and then ducked the police for 24 hours?

Tom Friedman says Obama should dial down his "inner Jimmy Carter" and dial up his "inner Dick Cheney"?

Jimmy Carter wanted to get the US off of its desperate dependence on Middle Eastern oil, Jimmy Carter understood that there would be no peace without human rights.

Jimmy Carter understood the 21st Century a quarter of a century before it dawned.

Here, again, is the definition of "depravity":

Scott McClellan should be giving testimony to congressional investigators, rather than gearing up for the book tour circuit.

Cheney should be preparing to resign in disgrace in order to avoid impeachment.

And Tom Friedman? He should be wandering the "marketplace of ideas" in a sack cloth, begging for alms.

Hard Rain Journal 7-3-07: Joe Wilson -- "The commutation of (Libby's) sentence in and of itself is participation in obstruction of justice"