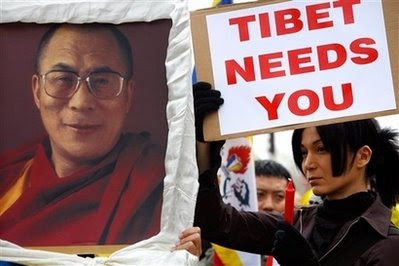 I have come up with a way to avoid a boycott of the Beijing Olympics.

If hypocrisy were to be included in the competition, it might just be worth it to allow the Olympics to go forward without too much protest.

Hypocrisy abounds in the political establishments of the great nations.

Consider the woeful circumstances of Darfur, Tibet and Burma:

"Please investigate.... if possible some respected organization, international organization carry entirely what is the condition, what is the situation in Tibet. Whether as a Tibetan nation, ancient nation with ancient cultural heritage is actually dying. And then also, whether intentionally or unintentionally, somewhere cultural genocide is taking place". Reuters, 3-16-08

China's role in all three nightmares is clear.

China considers Tibet a province and although the tourism business is quaint, it is chump change compared to Tibet's strategic importance -- both in terms of national security and natural resources.

And China props up the thugoracies in Burma and Sudan for its self-interest (oil, gas, etc.)

The USA's role in all three nightmares is less obvious, but it is there for you to see if you are willing to look.

Over the last eight years, the USA has lost its moral authority in the world, because of its invasion and occupation of Iraq and the subsequent humanitarian crisis, as well as its brazen defiance of the Geneva Accords on torture, its campaign of domestic disinformation and international obstructionism on global warming, etc., etc., etc.

But the Bush-Cheney regime does not really care about human rights or democracy. It just plays that card when it is convenient, and slips it back up its sleeve when it is inconvenient.

And even if the Bush-Cheney regime were genuinely concerned about human rights in China, it would not do anything. The USA desperately needs China now -- economically. Thanks to the hypocrisy shared by the Democratic and Republican establishments alike.

The great nations thwart the will of the UN Security Council whenever it is in their own self-interests. And no matter what their rhetoric implies, their self-interests are quite often the same, i.e., business as usual.

The monks of Burma have great moral authority to speak out on what is happening in Tibet today, tragically the USA does not, at least until January 2008 (if we're lucky).

Burmese Buddhist monks have strongly condemned the Chinese government for their brutal crackdown on Tibet’s monk-led protests in Lhasa, capital of Tibet, which led to at least 12 deaths and many more injuries.
Speaking with The Irrawaddy on Monday, a leader of the All Burma Monks Alliance, U Pyinya Zawta, said, “We strongly condemn the Chinese government for their crackdown on Tibet’s monks. We appeal to the Chinese government to stop their suppression of monks and initiate peaceful negotiations.”
The All Burma Monks Alliance is an underground monk’s organization inside Burma founded by Buddhist monks in September at the time protests broke out nationwide.
The crackdown on Tibetan monk-led protests by Chinese security forces is similar to the brutal crackdown on September’s peaceful demonstrators in Burma when at least 31 protesters, including monks, were killed, said U Pyinya Zawta. Irawaddy, 3-17-08