The Crow Nation Understands, So Do Joe Biden & Mike Papantonio, It is Time to Find the "Impeccable Warrior" Within 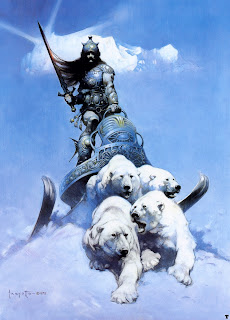 Carlos Castaneda on the Path of the Impeccable Warrior: The most effective way to live is as a warrior. A warrior may worry and think before making any decision, but once he makes it, he goes his way, free from worries or thoughts; there will be a million other decisions still awaiting him. That’s the warrior’s way.
The self-confidence of the warrior is not the self-confidence of the average man. The average man seeks certainty in the eyes of the onlooker and calls that self-confidence. The warrior seeks impeccability in his own eyes and calls that humbleness. The average man is hooked to his fellow men, while the warrior is hooked only to infinity.
The spirit of a warrior is not geared to indulging and complaining, nor is it geared to winning or losing. The spirit of a warrior is geared only to struggle, and every struggle is a warrior’s last battle on earth. Thus the outcome matters very little to him. In his last battle on earth a warrior lets his spirit flow free and clear. And as he wages his battle, knowing that his intent is impeccable, a warrior laughs and laughs. Carlos Castaneda, Wiki Quotes

Campaign '08 Update: The Crow Nation Understands, So Do Joe Biden & Mike Papantonio, It is Time to Find the "Impeccable Warrior" Within

Well, it has begun.

Do not be deluded. Do not underestimate the difficulties ahead.

The 2008 campaign may be the Gettysburg in the U.S. *civil* war (i.e., political rather than military struggle) that has raged for the last forty years.

Huckabee at the NRA Convention: “That was Barack Obama, he just tripped off a chair, he’s getting ready to speak,” said the former Arkansas governor, to audience laughter. “Somebody aimed a gun at him and he dove for the floor.” Crooks and Liars, 5-16-08

Sen. Clinton in Sioux Falls, S.D.: Smart candidates don't invoke the possibility of their opponents being killed. This seems so obvious it shouldn't need to be said, but apparently, it needs to be said. "We all remember Bobby Kennedy was assassinated in June in California," Hillary Clinton said yesterday, referencing the fact that past nomination contests have stretched into June to explain why she hasn't heeded calls to exit the Democratic race. Libby Copeland, Hillary Clinton Raises the Specter of the Unspeakable, Washington Post, 5-24-08

Are you naive enough to think these two abominable utterances are unrelated?

No, at the very least, they both flow from the same chill current in the subconscious mind of the US body politic.

It is time to fight.

They gave Obama the names "Black Eagle" and "one who helps all people of this land."

Democrat Barack Obama became an honorary member of an American Indian tribe ... and promised a proactive policy to help tribal people if he wins the White House in November.
Obama, who would be the first black U.S. president, was "adopted" by Hartford and Mary Black Eagle and given a name which means "one who helps all people of this land." ... "I like my new name, Barack Black Eagle," he said. "That is a good name."
Many in the audience wore traditional feather headdresses and some banged drums ahead of Obama's visit, the first by a presidential candidate to the Crow Nation. Reuters, 5-19-08

Sen. Joe Biden (D-DE) understands what time it is.

Sen. Joe Biden (D-RI) appeared on various morning talk shows and sharply criticized the notion that progressives are weak on national security. On MSNBC he responded to Lieberman, stating, “[C]an you imagine Franklin Roosevelt, can you imagine President Truman, can you imagine President Kennedy conducting the kind of policy this outfit has?” From the exchange:This administration is the worst administration in American foreign policy in modern history, maybe ever. The idea that they are competent to continue to conduct our foreign policy, to make us more secure and make Israel secure, is preposterous.
Ever since they got in office the only thing on the march in the Middle East has not been freedom, it’s been Iran. Every single thing they’ve touched has been a near disaster. Think Progress, 5-25-08

Mike Papantonio of Ring of Fire and Go Left TV understands what time it is.

GoLeft TV's Mike Papantonio sees a pending "swift-boating" for Senator Obama as the "Karl Rove filth machine" brings back seasoned Republican operative and Bush ally John Timothy Griffin to work for Senator McCain's presidential run.
Papantonio worries that the Democrats could take the same advice from the same brand of "intellectual advisors" that had Senator Kerry's doomed 2004 presidential campaign staying largely silent on accusations of "flip-flopping" and "elitism" in addition to the infamous "Swift Boat Veterans for Truth" attacks on his service in Vietnam. ...
Griffin, the McCain campaign's Director of Research, brings his experience from his time as Deputy Research Director for President Bush's 2000 run. He would also serve as a legal advisor for the "Bush-Cheney 2000 Florida Recount Team" during the battle that would culminate in Bush being awarded the presidency by the Supreme Court in Bush v. Gore. Griffin would later work as aide to White House Deputy Chief of Staff Karl Rove from September 2005 to September 2006.
Journalist Greg Palast also uncovered e-mails that implicated Griffin as part of a vote caging scheme in the run-up to the 2004 election ...
Unless the Democrats and the Obama campaign hire a "bottom-feeding, Griffin-like reptile" of their own, warns Papantonio, Democratic voters are in for a repeat of the 2004 campaign. Raw Story, 5-24-08

Here is the latest Pap Attack, view it for yourself and share it with your friends and colleagues:

For more Words of Power posts on Campaign '08, click here.