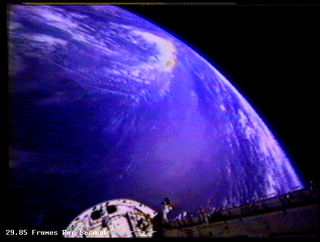 Pray that he survives the blowback that such bravery and prescience always provokes, pray that he succeeds where they did not.

And stand with him -- not behind him, but with him.

Yes, the stakes are that high. Yes, the moment is all that dangerous and all that pregnant.

We are at the barricades of an age.

Here are some excerpts from Obama's remarkable speech.

People of the world – look at Berlin!
Look at Berlin, where Germans and Americans learned to work together and trust each other less than three years after facing each other on the field of battle.
Look at Berlin, where the determination of a people met the generosity of the Marshall Plan and created a German miracle; where a victory over tyranny gave rise to NATO, the greatest alliance ever formed to defend our common security.
Look at Berlin, where the bullet holes in the buildings and the somber stones and pillars near the Brandenburg Gate insist that we never forget our common humanity.
People of the world – look at Berlin, where a wall came down, a continent came together, and history proved that there is no challenge too great for a world that stands as one.
Sixty years after the airlift, we are called upon again. History has led us to a new crossroad, with new promise and new peril. ...
As we speak, cars in Boston and factories in Beijing are melting the ice caps in the Arctic, shrinking coastlines in the Atlantic, and bringing drought to farms from Kansas to Kenya.
Poorly secured nuclear material in the former Soviet Union, or secrets from a scientist in Pakistan could help build a bomb that detonates in Paris. The poppies in Afghanistan become the heroin in Berlin. The poverty and violence in Somalia breeds the terror of tomorrow. The genocide in Darfur shames the conscience of us all. ...
The walls between old allies on either side of the Atlantic cannot stand. The walls between the countries with the most and those with the least cannot stand. The walls between races and tribes; natives and immigrants; Christian and Muslim and Jew cannot stand. These now are the walls we must tear down. ...
This is the moment when we must renew the goal of a world without nuclear weapons. The two superpowers that faced each other across the wall of this city came too close too often to destroying all we have built and all that we love. With that wall gone, we need not stand idly by and watch the further spread of the deadly atom. It is time to secure all loose nuclear materials; to stop the spread of nuclear weapons; and to reduce the arsenals from another era. This is the moment to begin the work of seeking the peace of a world without nuclear weapons. ...
This is the moment when we must build on the wealth that open markets have created, and share its benefits more equitably. Trade has been a cornerstone of our growth and global development. But we will not be able to sustain this growth if it favors the few, and not the many. ...
This is the moment we must help answer the call for a new dawn in the Middle East. ...
This is the moment when we must come together to save this planet. Let us resolve that we will not leave our children a world where the oceans rise and famine spreads and terrible storms devastate our lands. ...
This is the moment to stand as one. ...
Now the world will watch and remember what we do here – what we do with this moment. Will we extend our hand to the people in the forgotten corners of this world who yearn for lives marked by dignity and opportunity; by security and justice? Will we lift the child in Bangladesh from poverty, shelter the refugee in Chad, and banish the scourge of AIDS in our time?
Will we stand for the human rights of the dissident in Burma, the blogger in Iran, or the voter in Zimbabwe? Will we give meaning to the words “never again” in Darfur?
Will we acknowledge that there is no more powerful example than the one each of our nations projects to the world? Will we reject torture and stand for the rule of law? ...
People of Berlin – people of the world – this is our moment. This is our time. ...
I know my country has not perfected itself. At times, we’ve struggled to keep the promise of liberty and equality for all of our people. We’ve made our share of mistakes, and there are times when our actions around the world have not lived up to our best intentions.
But I also know how much I love America. I know that for more than two centuries, we have strived – at great cost and great sacrifice – to form a more perfect union; to seek, with other nations, a more hopeful world. Our allegiance has never been to any particular tribe or kingdom – indeed, every language is spoken in our country; every culture has left its imprint on ours; every point of view is expressed in our public squares. What has always united us – what has always driven our people; what drew my father to America’s shores – is a set of ideals that speak to aspirations shared by all people: that we can live free from fear and free from want; that we can speak our minds and assemble with whomever we choose and worship as we please. ...
People of Berlin – and people of the world – the scale of our challenge is great. The road ahead will be long. But I come before you to say that we are heirs to a struggle for freedom. We are a people of improbable hope. With an eye toward the future, with resolve in our hearts, let us remember this history, and answer our destiny, and remake the world once again.