Former White House chief counsel Harriet Miers is now a lobbyist for the Embassy of Pakistan and the Pakistan Peoples Party. On her foreign agent registration short form for Locke Lord Strategies, a subsidiary of Locke Lord Bissell & Liddell, the former Supreme Court nominee cites her work as part and parcel of Locke Lord's effort to "promote better understanding of the country's recent political, social, and economic developments" and line up state visits to Washington. Influence, The Business of Lobbying, 8-18-08 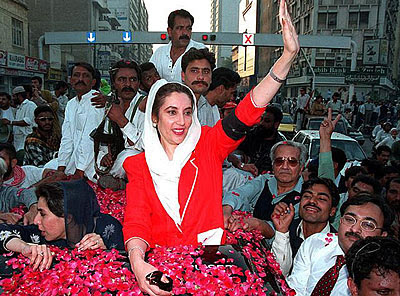 The irony is bitter.

The USA has spilled its blood and fortune in Iraq, which had no nuclear weapons, but does, of course, have oil. The USA has been rattling its saber at Iran, which also has oil but does not (yet) have nuclear weapons.

Meanwhile, Pakistan, which has no oil, but does have nuclear weapons, has slipped deeper and deeper into the shadow of Al Qaeda and the Taliban.

Yes, the USA has squandered all of its post-9/11 capital on Iraq and Iran, two nations that had nothing to do with the slaughter of the innocents on 9/11; meanwhile, the USA continues to arm and ally itself with Pakistan, which still provides safe haven for the perpetrators of that horror.

And yes, Harriet Miers, who handed the August 6th, 2001 PDB to George W. Bush, and should, arguably, be in jail for contempt of Congress on other matters, is now lobbying for Pakistan.

The world lost more than the sum of Benazir Bhutto's beauty and dignity the day Musharraf's security forces allowed her to be assassinated. In Pakistan's post-Musharraf environment, the poisoned fruit cultivated under his protection is falling into the laps of Al-Qaeda & the Taliban.

I urge you to read these two harrowingly insightful stories from the Asia Times. They will help you get your mind around Pakistan's descent into chaos. After all, Bob Schieffer and George Stephanoupolis won't be providing you with any meaningful context on Sunday morning, will they?

As if on cue, the Taliban launched two of their most daring attacks in Afghanistan on the day that Pervez Musharraf resigned as president of Pakistan, opening up a political vacuum in that country and throwing into doubt its continued cooperation in the United States' "war on terror".
Over 100 Taliban ambushed French soldiers on patrol with Afghan National Army troops at Sarobi, just 50 kilometers south of the capital, Kabul, killing 10 Frenchmen and injuring 21 in a battle that raged for more than 12 hours. ...
This is clearly a government of disunity, destined to endless feuding and paralysis - a situation militants will exploit to the full, as they have since Musharraf shed his uniform last November.
One of the key tactics of Islamic militants is to exploit political power vacuums, economic crises or any other problems to push a country towards disintegration.
In Pakistan and Afghanistan, this process is underway. Syed Saleem Shahzad, Asia Times, 8-21-08

It is well known that Bush repeatedly praised Musharraf as the most loyal ally of the United States against terrorism, even though the Pakistani military was deeply compromised by its relationship with the Taliban and Pakistani Islamic militants.
What has not been reported is that the Bush administration covered up the Musharraf regime's involvement in the activities of the Abdul Qadeer Khan nuclear technology export program and its deals with al-Qaeda's Pakistani tribal allies.
The problem faced by the Bush administration when it came into office was that the Pakistani military, over which Musharraf presided, was the real terrorist nexus with the Taliban and al-Qaeda. Gareth Porter, Asia Times, 8-21-08