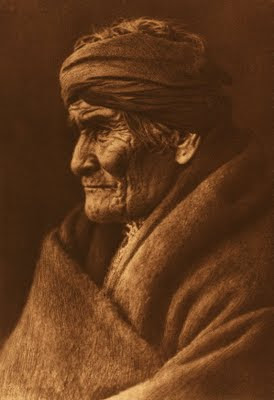 Yet we seemingly tolerate a rising level of violence that ignores our common humanity and our claims to civilization alike ... Too often we honor swagger and bluster and the wielders of force; too often we excuse those who are willing to build their own lives on the shattered dreams of others ... For there is another kind of violence, slower but just as deadly, destructive as the shot or the bomb in the night. This is the violence of institutions; indifference and inaction and slow decay. This is the violence that afflicts the poor, that poisons relations between men because their skin has different colors. This is a slow destruction of a child by hunger, and schools without books and homes without heat in the winter. Robert F. Kennedy, Jr., Cleveland City Club, April 5 1968
Edward Curtis, Hopi Mother (1922) From the Tar Sands to the Congo, from the Gulf Ecocide to the Triple Meltdown in Fukushima; the choice is simple - evolution or devolution?

Nuclear fuel has melted through base of Fukushima plant, Telegraph/UK, 6-11-11

But you won't hear much about it here in the US mainstream news media, or from the US political establishment.

Beltwayistan and Infotainmentstan want you preoccupied with the debt crisis, but without any introspection on its true causes (e.g., the 2.5 trillion dollar tragedy of the Bush-Cheney tax cuts) or any genuine cure (e.g., the People's Budget).

And why do Beltwayistan and Infotainmentstan want you to think that government is not only broken, but also broke?

Ah, now the answer to that question leads to some painful, but necessary revelations.

Consider our national response to the greatest crisis of our age.

When Obama took office, he appointed some of the country’s most knowledgeable climate scientists ... it seemed for a time as if he might take his responsibility to lead ... That hope has faded. The President sat on the sidelines in 2009 and 2010 ... Since the midterm elections, Obama has barely mentioned climate change, and just about every decision ... on energy, and the environment has been wrong. New Yorker's Elizabeth Kolbert Slams President Obama for Fiddling While the Planet Burns, Climate Progress, 6-6-11

Media Matters analyzed television news guests who discussed the Environmental Protection Agency's role in regulating greenhouse gas emissions from December 2009 through April 2011. Driven largely by Fox News Channel and Fox Business Network, results show that in 76 percent of those appearances, the guest was opposed to EPA regulations while 18 percent were in favor. Of the appearances by elected officials, 86 percent were Republican. Only one guest in 17 months of coverage across nine news outlets was a climate scientist -- industry-funded Patrick Michaels. Opponents Of EPA Climate Action Dominate TV News Airwaves, Media Matters, 6-7-11

Consider the man POTUS appointed to distribute the $20 billion in BP funds designated for victims of the ongoing Gulf Coast ecocide.

[Kenneth] Feinberg's downplay of chemical illnesses and other medical issues stemming from the BP oil disaster -- with full knowledge of the parallel court proceedings -- shows that he and his boss, BP, have no intention of "making it right" for people in the Gulf ... This inherent conflict of interest means Feinberg is nothing more than a well-paid sock puppet for BP ... Further, the federal laws and regulations designed to protect public health, worker safety, and the environment from oil and chemical poisoning are so riddled with exemptions that they cannot deliver their promise of protection ... Similarly, the federal government is also in denial ... Riki Ott, Lots of Inconvenient Truths - Chemical Illness Epidemic in the Wake of the BP Blowout, Huffington Post, 6-9-11

Consider the man the USA backs for a second term as UN General Secretary, in particular consider his performance in regard to the slow-motion GENOCIDE in Darfur.

... this is a decision that will be made largely by three wary members of the Security Council: China, Russia, and the United States. And their criteria for assessing job performance reflect nothing so much as their own geostrategic interests, which are often directly in conflict. This has the effect of producing a "lowest common denominator" candidate, a competition in which Ban Ki-moon excels. ... Since Ban assumed his position on January 1, 2007, more than 1 million civilians in Darfur have been newly displaced—more than 600,000 in his first two years in office ... During his entire tenure, security has continued to deteriorate, both for humanitarians and civilians. Ban and his disastrous special representative to UNAMID, Ibrahim Gambari, have had no success in pressuring Khartoum ... Eric Reeves, Sudan Research, 6-10-11

These circumstances no longer constitute a simple moral dilemma about the plight of some other people, or some other species, they now constitute a question of our very own survival. Sustainability and human rights are inextricably bound together in the 21st Century; and no one will have any lasting security (political or economic) without a sweeping and unshakable commitment to both. Our circumstances demand MASSIVE, NON-VIOLENT EVOLUTION. Such magic is dependent upon the courage and common sense of each individual.

The U.S. Department of State seems likely to approve a huge pipeline, known as Keystone XL to carry tar sands oil (about 830,000 barrels per day) to Texas refineries unless sufficient objections are raised. The scientific community needs to get involved in this fray now. If this project gains approval, it will become exceedingly difficult to control the tar sands monster ... An overwhelming objection is that exploitation of tar sands would make it implausible to stabilize climate and avoid disastrous global climate impacts.James Hansen, Silence Is Deadly: I’m Speaking Out Against Canada-U.S. Tar Sands Pipeline, ClimateStorytellers.org, 6-4-11

If there is hope, and there has to be, it flows from human beings standing in their own power. Like James Hansen and Eve Ensler. And yes, like you and me.

I am grateful for this heart that pumps the blood-wine, & for these lungs that circulate the breath of life. I am grateful I do not live in denial about our planetary peril or the utter failure of our governance. I am grateful that my embrace of these painful truths does not warp my love for creation or my hope for our future. I am grateful that the Wheel grinds on inexorably, & that I choose to move with it rather than against it.

You can also visit Richard Power author's page at Amazon.com.

Thom Hartmann Interviews Dr. James Hansen on "Storms of My Grandchildren: The Truth About the Coming Climate Catastrophe

Posted by Richard Power at 5:05 AM