Reflections on My Twitter Spat with Keith Olbermann, the Future of Current TV, and "A Responsibility to Something Greater than Ourselves." 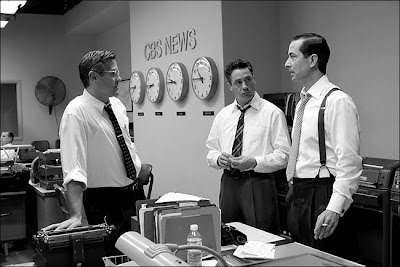 Reflections on My Twitter Spat with Keith Olbermann, the Future of Current TV, and "A Responsibility to Something Greater than Ourselves."

After the news broke that Current had fired Keith Olbermann, I was just sad. Because I am fond of both Al Gore and Keith Olbermann and grateful to them for all that they have done over these grim years since 2000, AND because the success of an alternative, progressive news media is vital to the survival of what is worthwhile in this nation. But then CNN's Howard Kurtz started *covering* poor K.O.'s frustrations with the amatuerishness of Current TV. (It's not like Kurtz spends much time on alternative media.) Why Kurtz even ended up with the texts of e-mails between Current and K.O. Now how could that have happened? Understand, Kurtz is not an investigative journalist, nor is he a serious analyst of the news media, he is a smarmy apologist for the corporatist media. The straw that broke this camel's back, though, was Olbermann's appearance on Letterman, in which with faux humility he feigned accepting responsibility for what happened at Current, likening his show to a "$10 million chandelier" that Current just couldn't accommodate properly.
So a brief Twitter spat ensured between me and K.O. (NOTE: I have arranged the tweets here in their logical sequence, not as they appeared on the timeline, you can reference that from our twitter feeds.)

@wordsofpower I didn't lie to him. He lied to me.

@KeithOlbermann I didn't say u lied 2 anyone.

@KeithOlbermann, @HowardKurtz is a corporatist toadie, using him as your mouthpiece 2 attack @current should b beneath u.

@wordsofpower and I haven't spoken to Howard Kurtz or dealt with him in more than a year. Your ability to assume I accurately is astounding

@KeithOlbermann either way, a corporatist toadie is using u 2 attack a progressive news source

@KeithOlbermann I have been a great admirer of your courageous work throughout these dark years, but not in this pettiness.

@wordsofpower Let me know when the "spirituality" kicks in

@KeithOlbermann maybe something about the greater good being crushed by a chandelier?

I soon found some corroboration for my position from a most worthy source.

On the April 7th, 2012 edition of Ring of Fire (THE weekly news magazine of the progressive media), in a passionate discussion with co-host Sam Seder (who offered a generous defense of K.O.), Mike Papantonio spoke out:

Mike Papantonio: "He got fired because he was acting like a damn prima donna ... You remember the Al Franken days back at Air America. We went through it. The guy was a damn prima donna. He had to have the right kind of cookies, the right kind of everything, but you know what, at the end of the day, he realized he had a responsibility, because there are only a few of us out there that are talking progressive talk, that are telling the other part of the story. Where are you going to get this? ABC going to deliver this? CBS? ... So with the few of us that are out there, we have to do everything we can if we really believe that what we are doing is something we should be doing. And that's why I am pissed off at Olbermann ... Think back to the Air America days, hell the electricity was turned off, but you still had Randi Rhodes showing up to do her job, you still had Thom Hartmann showing up to do his job, you still had people who understood there is more at stake ... some of them didn't even get paid, Sam ... We have a responsibility to something greater than ourselves."

Some years ago, at a particularly grim juncture in the abomination of the Bush-Cheney regime, something heroic, something rare, something beautiful, something noble appeared on our TV screens. It was K.O. mano o mano with the Dark Lords. K.O. was fierce, and clear-minded, and spot-on; he spoke for history and for the future, he spoke for our heritage and our legacy. And it was magnificent. And K.O.'s brave stand, led to the formation of a cluster of progressive news shows, including Rachel Maddow (she has taken TV journalism to a high level is has not reached in many years) and Ed Schultz (whose hard-hat, lunch-pail "leftie" populism is unique on the air waves). K.O, didn't do good, he did great. Search through the archives of Words of Power, both here on Blogspot and on Twitter, you will come across MANY references to K.O. work and MUCH praise for what he said and how he said it.
But this is a different time, grimmer in some ways; 2012 starts another cycle of life and death challenges for the USA. (Let us work to ensure that it is not the final cycle.) And again, something heroic, something rare, something beautiful, something noble has appeared on our TV screens.

Yes, it's production values lag behind MSNBC, etc. Yes, I get frustrated with Jennifer Granholm occasionally, e.g., the night some weeks ago when she chided Robert Reich for his righteous critique of POTUS' politics and policy choices, and boasted about POTUS' poll numbers. And yes, Elliot Spitz is a tragic figure, and such sorrowful stories are not shaken off easily. But these two big state former governors have street cred, and they have chosen to take a stand. Bravo. Together with the audacious Cenk Ugyar and his Young Turks (who is the bright light of Current TV), Granhold and Spitzer are putting out a three hour block of real news and progressive analysis every week day evening. And meanwhile, for six hours every morning on Current, a new synergy between progressive talk radio and progressive TV is being forged with the simulcasts of the Bill Press and the Stephanie Miller shows.

That's NINE HOURS a day. (And when Exxon ads start to impact its content, as it has on even the best of the MSNBC shows, I will be the first to sound the alarm.) Seriously, people, we are in an information war, and we are the resistance. If Current fails, we will be in worse position.

Who could blame him. He did move mountains.

I urge you to support Current TV (demand it from your cable provider), and to contribute to Ring of Fire Radio, Buzzflash and the other bastions of progressive media. (Yes, even Words of Power!)

There are wild rapids ahead of us all.

Richard Power is the author of seven books, including Between Shadow and Night: The Singularity in Anticipation of Itself and True North on the Pathless Path: Towards a 21st Century Yoga. He writes and speaks on security, risk, human rights and sustainability, and has delivered executive briefings and led training in over 40 countries. He blogs at http://words-of-power.blogspot.com and http://primalwordsofpower.blogspot.com
Posted by Richard Power at 3:33 AM