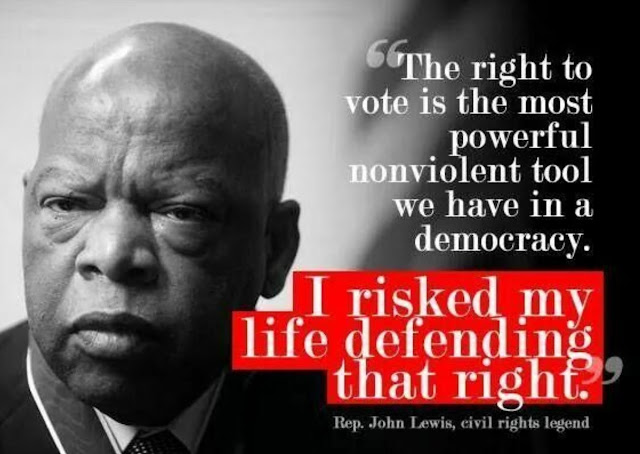 "You are the light. Never let anyone—any person or any force—dampen, dim or diminish your light. Study the path of others to make your way easier and more abundant. Lean toward the whispers of your own heart, discover the universal truth, and follow its dictates. […] Release the need to hate, to harbor division, and the enticement of revenge. Release all bitterness. Hold only love, only peace in your heart, knowing that the battle of good to overcome evil is already won. Choose confrontation wisely, but when it is your time don't be afraid to stand up, speak up, and speak out against injustice. And if you follow your truth down the road to peace and the affirmation of love, if you shine like a beacon for all to see, then the poetry of all the great dreamers and philosophers is yours to manifest in a nation, a world community, and a Beloved Community that is finally at peace with itself.” - John Lewis, Across That Bridge: A Vision for Change and the Future of America (2012) 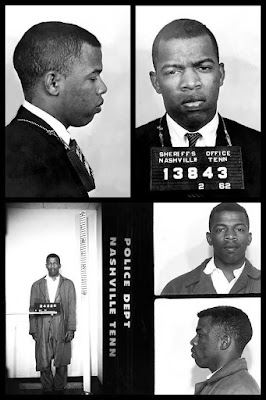 I am not a sentimentalist. At least not about death. I have been around too much of it. I know what it is, I know what it isn't. I don't do obituaries. I don't write them, read them or post them. I get it, I understand the need. I understand the function, I just don't do obituaries. I am not a "rest in peace" person, I am not a "sorry for your loss" person. My relationship with death is seemingly paradoxical: On the terrestrial plane, I am an existentialist -- when someone falls, they fall, they're gone. I live with the living. I don't look back, I lean forward. But on the occult plane, I know with utter certainty that what the humans call "death" is not what they imagine it to be. The terrestrial life and work of a great being, whether in the arts, the sciences or in politics (yes, I said politics), it just the beginning in one sense, or the continuation in another sense, resulting in an infinite cascade of ripples through all time and space, i.e., all being. Death is death. Period. Full stop. Death is not death. Period. Full stop.
Can you embrace this divine paradox? Sooner or later, you will have to.
So this is is not an obituary for Rep. John Lewis, D-GA. This is a dispatch from the barricades where John Lewis stood, leaning forward on the terrestrial plane, advancing the front line with each forward step. He has fallen. We must hold the line, and advance the line. Step by step. But meanwhile, on the occult plane, that infinite cascade of ripples that flow out from this rare gem stone soul dropped into the great salt sea of the human psyche, that infinite cascade has only just begun ...
Any truthful dispatch from the front line of this forward movement cannot help but also be a call to non-violent action, the facts compel it, reality itself compels it, the narrative demands it, mass action on the streets, yes, but also court action, legislative action, social and cultural action within our own interpenetrating circles and holiest of all, electoral action (yes, the vote, your vote).
The terrestrial life of John Lewis embodied all of these actions, and the occult life of John Lewis, that infinite cascade of rippling Love Supreme (yes, I bow to the great Coltrane), the occult life of John Lewis' "good trouble" moves forward world without end ...
As a citizen, as a human being, I have spent almost all of my life on these barricades, one way or another, many of us have, whether for you that means a decade or two, or as for me too many decades ... But for as long as I have stood on this barricade and leaned forward, I could hear the voice of John Lewis somewhere along the line ...
A brave voice, a true voice, a voice that did not falter, a voice that always spoke from a place of adamantine love and determination ...

In 2000, the shell of a man formerly known as Ralph Nader declared that there was no difference between Bush and Gore, and there he was in the final days before the election, campaigning in Florida. Gore won, but Bush was sworn in. Not all of Al Gore's votes got counted, but enough of Nader's votes got counted to turn the electoral college, and the country, over to Cheney and Rove. Al Gore wouldn't have invaded Iraq or pulled out of the Kyoto Climate Accords or ...

So, in 2016, tell me, in Moscow in December 2015, was Mike Flynn Dr. Stein's dinner date, or was she Vladimir Putin's dinner date? Or was it a dirty tricks menage a trois? Like the shell of a man formerly known as Ralph Nader before her, Jill Stein told you that there was not enough of a difference between Hillary Clinton and Donald Trump. Clinton won, but Stein's votes (and her "recount efforts" in key battleground states turned the electoral college, and the country, over to Putin and put his weaponized clown in the White House. "I'm the last thing standing between you and the Apocalypse," Clinton warned, and she was right.

In between, of course, Barack Obama held the high ground, setting the U.S. on an incremental but inexorable path to universal healthcare, signing the U.S. on to the Paris Climate Agreement, and not only avoiding war with Iran, but working successfully with the other world powers to arrive at a peace agreement. But throughout it all, even as Citizens United hollowed out our democratic institutions, some among us, those who had become toxic, those who had lost touch with reality, chose to spend the eight years carping at Obama and the "Democratic Establishment." They had learned nothing from 2000.

And, in 2000, in 2012, in 2020, do you know what I told those I knew who argued that there was no difference (or not enough) between the two major parties and who argued for a third party or just don't even bother to vote? I said, "I will leave the Democratic Party when John Lewis leaves it." If he felt it was worth fighting for, then so did I. None of them had any real response to that. It was inevitably the end of the argument. Oh, some of them went ahead and threw away their votes, but they had no answer to my reason for not throwing away mine. Because, well, John Lewis ...

Yes, for as long as I have stood on this barricade and leaned forward, I could hear the voice of John Lewis somewhere along the line ...

Throughout his life, John Lewis not only put his shoulder to bending the arc of the moral universe toward justice, he also stood at the fulcrum of history.

Consider John Lewis in January 2009 and in January 2017 --
As a young man, John Lewis was arrested and beaten over and over again, in non-violent resistance, and as an elder statesman he often broke into dances of jubilation after speaking on the campaign trail. Whether surrounded by hate or love, John Lewis led. But now he has fallen.

And you and I are still here at this barricade, leaning forward, advancing the front line step by step.

On the terrestrial plane, his dances of jubilation have ceased, but on the occult plane, that infinite cascade of ripples still flows out from this rare gem stone soul dropped into the great salt sea of our national psyche ...
This is the great battle of our time. This is it. All of the praying, the marching, the voting, the decades, it all comes down to this November, and to the dangerous time between this November and next January. The demographics are with us, the arc of the moral universe is accelerating, evolution has been grinding on relentlessly. The Death-Eater Overlords' stranglehold on the electoral college is  going to be broken. A second consecutive tsunami is building. A 2020 #BlackLivesMatter tsunami to follow on the 2018 #MeToo tsunami. A united front for sanity and decency is coalescing, Right, Left and Center. We must survive the pandemic and save the republic.

The forces of evil (yes, evil, it's a diagnosis not a moral judgment) have a ruthless grip on the levers of power, but if we take the Senate and topple #MoscowMitch, it's all over for them. In spite of the dirty tricks, the information warfare, the vote suppression, the dark money, the gerrymandering, the electoral college, in spite of all of it ... a new world is coming, the great shift is already underway ... we must not fail to show up for this moment ...

John Lewis died a few days ago at the age of 80. I found myself pondering the length of his life, how deep into it he had gone, and how the sands in the hourglass finally ran out. 80 years. And then it occurred to me, he was only fourteen years older than me. Fourteen years ...

-- Richard Power is the Author of "I, the Dragon: Chronicles of An Epic Life Among the Humans" and "Wyrds of Power: New Language for A New Reality." Both are available from Amazon.com. 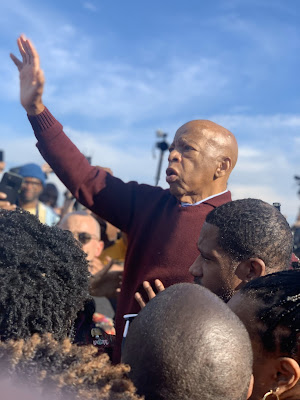 Posted by Richard Power at 5:47 AM