I launched Words of Power in August 2005, so this month marks the site's tenth anniversary.

To celebrate the milestone, I have added eleven new posts to my ongoing narrative. (These eleven posts are backdated, so that they appear in their correct chronological order.)

Five of them are more "Epiphanies," initially published via my Instagram feed:

The other six new posts constitute a series of brief excerpts from the work of great woman writers and philosophers. This series was initially posted via my Facebook page. It furthers the exploration I shared in Notes on the Ascendancy of the Feminine in Psyche (Human and Divine), a talk I included in my tenth book, Planetary Emergency/Personal Emergence: Path of An Evolutionary (2014). In that talk, I featured the life and work of nine great woman mystics and nine great woman artists and photographers. This continuing concentration seeks to contribute to the supplanting of history with herstory for the collective healing and transformation of our species:

Great Song: Life and Teachings of Joe Miller - Available Now Via Kindle (Amazon) and Nook (Barnes and Noble)
Posted by Richard Power at 1:02 AM


From the writings of the bold, brilliant Simone de Beauvoir --

“I wish that every human life might be pure transparent freedom.” (The Blood of Others, 1946)

“In spite of so many stubborn lies, at every moment, at every opportunity, the truth comes to light, the truth of life and death, of my solitude and my bond with the world, of my freedom and my servitude, of the insignificance and the sovereign importance of each man and all men ... It is in the knowledge of the genuine conditions of our life that we must draw our strength to live and our reason for acting.” (Ethics of Ambiguity, 1947)

“The present enshrines the past—and in the past all history has been made by men.” (The Second Sex, 1949)

“It was said that I refused to grant any value to the maternal instinct and to love. This was not so. I simply asked that women should experience them truthfully and freely, whereas they often use them as excuses and take refuge in them, only to find themselves imprisoned in that refuge when those emotions have dried up in their hearts. I was accused of preaching sexual promiscuity; but at no point did I ever advise anyone to sleep with just anyone at just any time; my opinion on this subject is that all choices, agreements and refusals should be made independently of institutions, conventions and motives of self-aggrandizement; if the reasons for it are not of the same order as the act itself, then the only result can be lies, distortions and mutilations.” (Force of Circumstances Vol. III, 1963)

“Self-knowledge is no guarantee of happiness, but it is on the side of happiness and can supply the courage to fight for it. Psychiatrists have told me that they give The Second Sex to their women patients to read, and not merely to intellectual women but to lower-middle-class women, to office workers and women working in factories. 'Your book was a great help to me. Your book saved me,' are the words I have read in letters from women of all ages and all walks of life. If my book has helped women, it is because it expressed them, and they in their turn gave it its truth ...” (Force of Circumstances Vol. III, 1963)

“Society cares about the individual only in so far as he is profitable. The young know this. Their anxiety as they enter in upon social life matches the anguish of the old as they are excluded from it.” (The Coming of Age, 1970)

“I tore myself away from the safe comfort of certainties through my love for truth — and truth rewarded me.” (All Said and Done, 1972)

"In itself, homosexuality is as limiting as heterosexuality: the ideal should be to be capable of loving a woman or a man; either, a human being, without feeling fear, restraint, or obligation." (Quoted in Bisexual Characters in Film: From Anaïs to Zee, 1997)

The wave rises. You close your eyes. It crashes in upon you. After few hours, another wave rises. The interlude is rarely as long as a day, and never as long as a week. After the wave breaks, an utterance is demanded. From deep within. However articulate that utterance is, it is still no more than a gasp or a howl. And yet, all the joy of all the beings is held in that gasp, like a great strand of kelp, and it wraps itself around all the suffering of all the beings, and the two great strands of kelp undulate in a sacred dance of awakening and arousal. Until the surf is all out again, and it is time for another wave to come crashing in. Invariably, this one too is infused with the joys and sorrows of all beings everywhere. And yes, invariably, as it crashes over you, another utterance imperative arises. So you speak it all out loud, again and again, and each time it is wholly new and yet the same as it has always been. You feel every grain of sand the wave carries with it. Yes, you feel every sand grain and you hear every sand grain's story, all at once -- as if from the inside out.

This is how it is. The far shore is behind you. 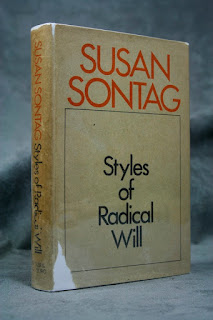 
Disguised as a statue, this nocturnal intelligence braves the sunlight. Moon after moon, season after season. Abiding, enduring, ceaselessly vigilant. Motionless, on a steel ledge. Ignored, unheard, unrecognized. In a teeming metropolis, on a lost world. When the Wild Goddess returns, this nocturnal intelligence will spread its strong black wings and glide over the torn up streets. To feast on small creatures of truth and beauty emerging from the long hidden soil of the soul.