Seven Beasts, A Tale of the Mysterium 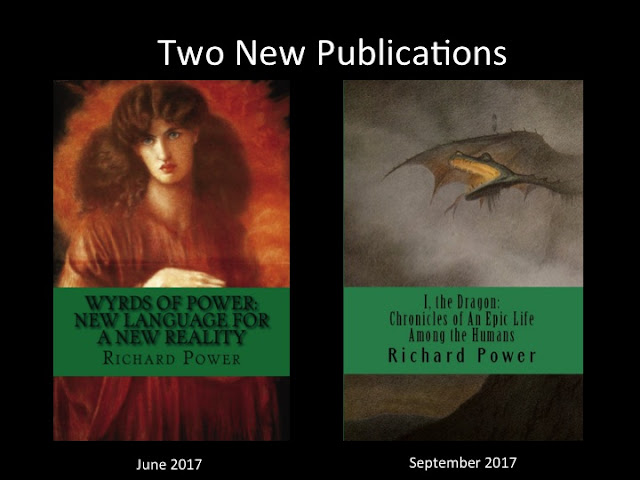 On June 16, 2017 (Bloomsday), I announced two major new publications, Wyrds of Power: New Language for A New Reality (available now) and I, the Dragon: Chronicles of An Epic Life Among the Humans (coming in Fall 2017). To mark the occasion, I delivered a presentation entitled Seven Beasts: A Tale of the Mysterium.  This talk, a shamanic journey really, included the first public reading from I, The Dragon.  A digital artifact of the event is embedded in this post and also accessible via the Words of Power You Tube channel.

Here is some background on each of the new books.

Wyrds of Power: New Language for A New Reality includes my entire Primal Reality series (five books) in one deluxe edition. This work constitute a significant contribution to the emerging global wisdom tradition of the 21st Century.

Several overarching themes frame this work:
Interspersed between each movement of this sweeping exploration, I have inserted batches of "epiphanies." Existential. Somatic. Reality-based. Experiential. New language for perennial truths. Dispatches from the Ancient Future. An inventory of open secrets. A compass for the pathless path.

The books included in this deluxe one-volume edition (in reverse chronological order):

I, The Dragon: Chronicles of An Epic Life Among the Humans is an autobiographical novel that spans six decades. It tells the story of a remarkable journey from profoundly abused child to global intelligence and security expert to yoga teacher and philosopher-poet.

In the course of the narrative, I offer an alternate history of the modern era, with insights into democracy, geopolitics, art, science, human rights and the Climate Crisis.

Excerpt from A Note to the Reader in I, The Dragon:

I, The Dragon will be available in Fall 2017. Related announcements coming in September.

This digital artifact includes the full audio recording, my PowerPoint presentation, some precious iPhone video and a few still photographs of the gathering itself. [NOTE: If you receive Words of Power via email subscription, you will have to click on the hyperlink to view the You Tube post.]

Seven Beasts, A Tale of the Mysterium (Part I and Part II)

This Bloomsday talk constituted Part I and Part II of Seven Beasts; Part III will be released via the Words of Power You Tube channel in August 2017 and cross-posted here.