The Attempted Rape and Murder of the Ukraine by Vlad the Pathological, Global Crime Lord, & His Very White Russian Gang Bangers

"What I saw, I hope no one will ever see. Mariupol will become part of a list of cities that were completely destroyed by war; I don’t need to name them–Guernica, Coventry, Aleppo, Grozny, Leningrad," said Manolos Androulakis, the last EU diplomat to leave - Reuters, 3/20/22

Mariupol is now a ghost city – 80% of its infrastructure is damaged or destroyed, 40% of which cannot be rebuilt, authorities say. One of the largest in the country, a beautiful, developed city razed to the ground In case, just in case someone still has to hear this – a majority Russian-speaking city too. - Anastasiia Lapatina @lapatina_ (3/20/22)

"At this fateful moment we stand united with free, independent and democratic Ukraine and strongly reject the Russian government’s misuse of history to justify its own violence." - Statement on Ukraine by Scholars of Genocide, Nazism and WWII (2/28/22)

Russia’s war displaces nearly 10 million Ukrainians. The United Nations Migration Agency now estimates that 6.5 million Ukrainians have become internally displaced by the war. An additional 3.2 million have fled abroad, over 2 million of them to Poland. - The Kyiv Independent @KyivIndependent (5/18/22)

Almost 10,000 Russian KIAs in 3.5 weeks of fighting according to the leaked numbers from the Russian MoD. That's the most casualties Russia has sustained in the shortest period of time since 1945! - Dmitri Alperovitch @DAlperovitch (3/21/22)

Retired Lt. Gen. Ben Hodges, who formerly served as the Commanding General, U.S. Army Europe, claimed that Russia's Ukraine invasion is going so poorly that it could collapse within five days ... ''I do believe my professional assessment is that Russia is going to culminate, the culminating point, within the next five to six days because they have serious manpower shortages, serious logistical problems" ... I have got to believe that there are people around him that are thinking about life after this, that they do not want to be with him when he drives the bus off the cliff - Raw Story (3/20/22)

It is going to be really disturbing when we fully uncover just how much Putin influenced our system & gained from the Trump years all by exploiting our divisions in America & paying off politicians & news personalities. No wonder the @gop is trying to create all these memory laws - Sari Beth Rosenberg @saribethrose (3/19/22) 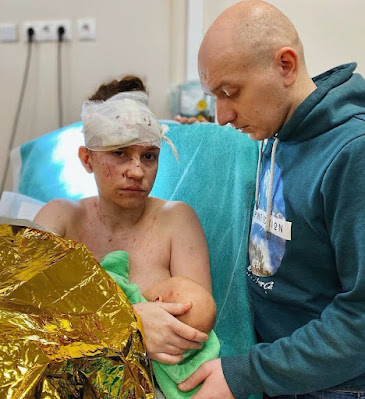 "This is the Madonna of Kyiv. This is the reality of Putin’s war."
- Natalia Antonova (@NataliaAntonova)
The Attempted Rape and Murder of the Ukraine by Vlad the Pathological, Global Crime Lord, & His Very White Russian Gang Bangers
Equinox. March 2022.
The Great Wheel turns, turn with it.
Like the Gaia, the Earth Herself, Democracy is a Goddess. Gaia's Daughter, in fact. (The deer know this.) Like Her Mother, She is everywhere. Always. At the Louvre, bare-breasted, holding aloft the French flag in Eugene Delacroix's La Liberté guidant le peuple. In New York harbor, holding aloft the torch of freedom. "Give me your tired, your poor, your huddled masses yearning to breathe free ..." For four mystical days and nights, She shone forth from Tiananmen Square, as a call and a cry, as a beacon and a promise. Like Her Mother, Gaia, She is everywhere. Always. And like Her Mother, Gaia, She will triumph in the end, and that end will be another beginning, either for our species and this world, OR for this world without our species. That is yet to be determined.
Right now, the "great battle of our time" is centered on Ukraine.
High time for some harsh facts and hard truths.
Why is this happening? No, not because of any push for NATO expansion. No, not because of "appeasement" after Putin took Crimea and parts of the Donbar in 2014. Why is this happening? It's much simpler really. It is pathology not geopolitics. There is a predator, sadistic and perverted, irretrievably soulless. He lives next door to a beautiful young woman. He watches her day and night. He goes through her garbage. He sneaks into her house and to take trophies. He has been clever up until now. He has gotten away with everything. But one day, he simply cannot control himself any longer. He climbs over the fence and breaks into the beautiful young woman's house. He wants to rape and kill her. He cannot hold himself back any longer. It really is that simple. Putin is a predator.
If you stand with Putin, if you support him in any way, if you cheer on Putin's aggression against this peaceful neighboring country, you are touched with the same E-V-I-L that has already consumed him, you are in danger of losing your soul and falling into the abyss.
Furthermore, if say you’re simply “anti anti-Putin” you’re really pro-Putin. Period. Full stop. And that's true whether you're toxic “left” (e.g., Glenn Greenwald or Tulsi Gabbard) or toxic right (e.g., Tucker Carlson or Marjorie Taylor Green). The only open question is are you Fifth Column or just a “useful idiot”
There is need for a short list of grave wrongs that are not relevant in the context of the current crisis:
The United Front for Sanity and Decency (left, liberal, right & center) that coalesced in 2016, to defeat Trump, to keep the House gavel in Speaker Pelosi's hand and to deliver a 50-50 tie in the Senate, this United Front from the Lincoln Project to AOC, it must must MUST hold together but now not just for the 2020 and 2024 election cycles, but for this defense of Ukraine and the West. It is all the same war.
Some among you ask, "Is this the beginning of World War III?"
My answer is twofold:
I take all of this personally.
In the mid-1990s and throughout the 2000s, I delivered intelligence briefings in over 40 countries. I warned government officials and corporate executives about the greatest threats to global security. It was not what most of them expected to hear, and certainly not what they wanted to hear: I said the number one threat was already rapidly accelerating Climate Crisis, and i said the number two threat was the rise of organized crime in Russia and Eastern Europe. I said it over and over, unequivocally: Russian organized crime poised a far greater danger than Islamic terrorism, which of course is what they were all obsessed with at the time. It was much more convenient. I was not the only one who said this. But here we are. Putin acting out of his predatory fantasies of rape and murder is the end result of ignoring the warnings. For what it's worth I say the beautiful young Ukraine will defeat her attacker, with the help of a resurgent NATO and a rejuvenated Western alliance (Trump and Brexit failed, that plot depended upon Trump having a second term).
In the mid-2000s, I was flown to Sofia, Bulgaria to be featured speaker at a NATO conference. The attendees were recently appointed judges, prosecutors and law enforcement officers from Poland, Moldavia, Latvia, Lithuania, Estonia, Belarus, Georgia, and yes, the Ukraine. They had been tasked with establishing the rule of law in those newly democratic societies.
I remember reading their faces, looking for who was going to shine forth, who was going to be compromised, and of course which ones were actually Russian spies. I remember those faces now, I recall our conversations, I pray for them, even the Russian spies (after all, it is probably the Russian security and intelligence services who will bring Putin down for the survival of their own people).
I am writing this post as a marker to bear witness as the sands of time shift.
Here are some extensive excerpts from a brilliant piece by the great Anne Applebaum (of course)in The Atlantic (of course). Follow the link below and read the full text. It is a vital read.

Before you can achieve something, you have to imagine what it will look like. And in this war, victory can be imagined without difficulty. It means that Ukraine remains a sovereign democracy, with the right to choose its own leaders and make its own treaties. There will be no pro-Russian puppet regime in Kyiv, no need for a prolonged Ukrainian resistance, no continued fighting. The Russian army retreats back over the borders. Maybe those borders could change, or maybe Ukraine could pledge neutrality, but that is for the Ukrainians to decide and not for outsiders to dictate. Maybe international peacekeepers are needed. Whatever happens, Ukraine must have strong reasons to believe that Russian troops will not quickly return ...

A victory for Ukraine really will be a victory for all who believe in democracy and the rule of law. Citizens of existing democracies and members of the democratic opposition in Russia, Cuba, Belarus, and Hong Kong will all be emboldened. “Their struggle is ours,” a Venezuelan acquaintance told me last week. The institutions protecting the states that embody those ideas, most notably the European Union and NATO, will be strengthened too ...

In Mariupol, authorities report that citizens are being forcibly deported to Russia, just as Soviet secret police deported Balts, Poles, and others to Russia after the invasions of 1939 and 1945. In the case of a Russian victory, these tactics would be applied all over Ukraine, creating mass terror, mass violence, and instability for years to come. And, yes, if we accept that outcome, autocrats from Minsk to Caracas to Beijing will take note: Genocide is now allowed.

Precisely because the stakes are so high, the next few weeks will be extremely dangerous. Putin will do what he can to create fear ...

How should the West respond? There is only one rule: We cannot be afraid. Russia wants us to be afraid—so afraid that we are crippled by fear, that we cannot make decisions, that we withdraw altogether, leaving the way open for a Russian conquest of Ukraine, and eventually of Poland or even further into Europe. Putin remembers very well an era when Soviet troops controlled the eastern half of Germany. But the threat to those countries will not decrease if Russia carries out massacres in Ukraine. It will grow.

Instead of fear, we should focus on a Ukrainian victory. Once we understand that this is the goal, then we can think about how to achieve it, whether through temporary boycotts of Russian gas, oil, and coal; military exercises elsewhere in the world that will distract Russian troops; humanitarian airlifts on the scale of 1948 Berlin; or more and better weapons.

The specific tactics will be determined by those who best understand diplomacy and military strategy. But the strategy has to be clear. A month ago, nobody believed this war would matter so much, and I’m sure many people wish it did not. But it does. That’s why every move we make must have a single goal: How does it help Ukraine win?

“It’s not our war” was something we might have been able to say three weeks ago. Not now.

Posted by Richard Power at 2:52 PM