A Secret is Lost Within Us, Between Darfur & Denmark; If We Don't Find It, We Will Perish or Wish We Had; Reflections on Thom Hartmann's Threshold

Buy Threshold for yourself, your loved ones, your friends and colleagues, and help sustain the alternative media by buying it from Buzzflash! 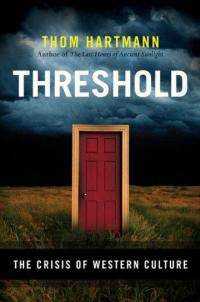 The difference between us today and those who lived in previous times is that we have the luxury of looking back across the whole sweep of world history and "prehistory" to see how it works (and what prevents it from working) and, it is hoped, to finally get it right. Threshold: The Crisis of Western Civilization

A Secret is Lost Within Us, Somewhere Between Darfur & Denmark; If We Don't Find It, We Will Perish or Wish We Had; Reflections on Thom Hartmann's Threshold

Here we are less than a year into the Obama-Biden administration, and yet it is already painfully clear just how toxic the US body politic became over the years of right-wing ascendancy that began with the so-called “Reagan Revolution.”

Although Barack Obama’s roots are in the progressive movement, he is a centrist, and this should be of no surprise to anyone; and yet he is vilified by the right as a Marxist, a Socialist, a Communist, etc. Absurd lies embraced by the willfully ignorant.

Oh, but of course, those labels aren’t really slapped on him because of his ideological predisposition are they? No, it is because he is an African-American. After all, that is also the way they demonized Martin Luther King, Jr. “Marxist, Communist, Socialist …” (Absurd lies embraced by the willfully ignorant.)

And then they killed him.

The demented resistance whipped up against the most modest and incremental health care reform proposals is a bad sign of what is to come. The U.S. health care crisis is debilitating and shameful. And in a civil society it would elicit a broad, deep and indignant consensus for urgent and sweeping action.

But here … Well, we shall see soon enough …

Progressives are faced with a tremendous challenge, to somehow strike a balance strong enough to stand with Barack Obama against the uprising of the Neo-Confederacy and its financiers in the US Chamber of Commerce, and shield him as best we can against the poison-tipped arrows that are hurtling his way, while at the same time pushing back hard against unsavory policy compromises made appealing to him and his inner circle by the grim realities of the current campaign finance system.

Meanwhile, the planetary sustainability crisis (climate change in particular) looms just ahead, its scope and potential impact almost beyond comprehension; and at the same time, genocide in Darfur, rape as a weapon of war in the Congo, as well as crimes against humanity committed in Burma, Tibet and elsewhere, are condemned rhetorically but, for all practical purposes, tolerated as a price of doing business.

Grassroots organizing is vital, citizen journalism is vital, a personal commitment to human rights and going green is vital; but there is something missing …

We have great need for a bold vision, a new way of thinking and speaking about the challenges that face us.

In Threshold: The Crisis of Western Civilization, Thom Hartmann has weighed in on that great need; and what he has to say is of profound importance and usefulness.

Best know for his radio show, Hartmann is an extraordinary resource and an invaluable asset, not only for progressives, but for anyone really looking for in-depth analysis and practical solutions in this era of global crisis; and Hartmann’s influence can be felt not only on the air waves, but on the plane, at the café and in the library.

Because Hartmann is the author of 20 books (and counting), including three books on my must read list for people who are both patriots and citizens of the world: What Would Jefferson Do (“how this most brilliant thinker of his day would respond to the challenges of the 21st Century”), Last Days of Ancient Sunlight: The Fate of the World and What We Can Do Before It's Too Late (“details what is happening to our planet, the reasons for our culture's blind behavior, and how we can fix the problem”), and Unequal Under The Law (“the ultimate theft of human rights before the Supreme Court in 1886”).

All of these books were both prescient and timely, but none more so than Threshold.

Hartmann wrote the Introduction to Threshold on the ground in the Hell of Darfur:

The forty-five thousand people around me share on single hand-pumped well (drilled a decade ago by the United Nations) and no other infrastructure beyond that. No building, no roads, no septic tank or sewage system, no school …

One of my personal goals for this trip was to find ten stones to build a small altar, anoint it with oil, and say the ninety-first psalm over it. It’s an eccentricity I learned from my mentor, Gottfried Mueller. The problem I encountered is that there are no stones.
None.
The land is so incredibly ancient that all the stone has been weathered to dust.

On the journey that is the book, through his eyes and with his heart and mind, you immerse yourself in that Hell and then contrast it with human life in Copenhagen:

Quite literally, from birth to death, while Danes have millions of choices to make with and about their lives, from partnership (gay marriage/partnerships have been legal here since 1989) to occupation to travel, they have few worries about the things that most nations in the world consider “quality of life” issues. Water is pure. Electricity is inexpensive (20 percent of Danish electricity is produced by windmills, with a goal of 50 percent within the next decade). Sickness and old age, while inconvenient, are not the threats to comfort or survival that they are in the United States.
So how, exactly, did the Danes get it so right? And why does the principle that their society is based on – higher taxes equals greater overall quality of life – seem so scary to Americans?

Compelling questions and fascinating answers arise from this bold counterpoint.

Hartmann articulates the three thresholds, just in case you have not yet stumbled upon them yourself:

… an environment that is so afire it may soon no longer be able to support human life; an economic “free market” system that is almost entirely owned, run and milked by a tiny fraction of one percent of us and has been crashed and in many ways is burning around us; and an explosion of human flesh on the planet that has turned our species into a global Petri dish just waiting for an infective agent to run amok.

He also enumerated four mistakes that have led us into these dangerous circumstances:

The first mistake is to believe we are separate from nature …

The third mistake is to believe that men should run the world, and that women are their property …

This is not where Hartmann’s brilliant analysis ends, this is where it begins.

In Threshold, he paints the Big Picture, asks the Big Questions and yes, delivers answers.

But you will have to buy it to read those.

I urge you to do so, and when you do, buy two (at least) and pass it on to a friend, a loved one or a colleague, it is going to take a lot of us to realize there is only one of us.