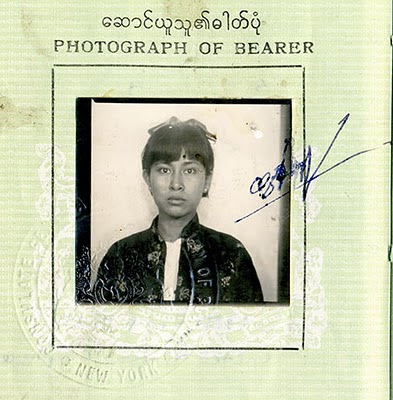 You're packing a suitcase for a place none of us has been
A place that has to be believed to be seen
You could have flown away
A singing bird in an open cage
Who will only fly, only fly for freedom
Walk on, walk on
What you've got they can't deny it
Can't sell it, or buy it
Walk on, walk on
Stay safe tonight
Walk On, written by U2 for Aung San Suu Kyi in 2000

For years, Words of Power has documented the agony of Burma and demanded the release of Aung San Suu Kyi. She was finally released a week or so ago.

It was a moment for tears of joy.

As I type this, Suu Kyi is walking and speaking freely. I hope that whenever you read this, she still is walking and speaking freely. Of course, she is not satisfied with her own freedom; she wants a future for her people. So if you read this some decades from now, and she is gone from this world, I hope history will report that she died in peace in the new society she birthed for that long-suffering people.

The bitter irony is that she was the safer, in some ways, in captivity.

“Before the Depayin incident in 2003, there wasn't a state of mind in the military or other forces to assassinate her though she faced a series of verbal harassment,” said Win Tin, one of the party's founders and secretary of the NLD. “But after the Depayin incident, we saw that there had been a state of mind to assassinate her.” ... Citing the assassination of Pakistan's former Prime Minister Benazir Bhutto as an example, Win Tin said: “As a political leader who always deals with the people, she can be assassinated by a killer who is hiding in the crowd at any time.” Since her involvement in Burmese politics in 1988, Suu Kyi has faced a number of threats on her life. Irrawaddy, 11-14-10

And yes, the Burmese junta is still in power. With their sham referendum, they have simply traded in military uniforms for suits. (Perhaps donning business suits is the first honest act of their reign of terror and corruption. The use of military force was just the most efficient means to their desired end. It is their own obscene profit and protection that they are really focused on, not the national security or prosperity of their people.)

And tell me, with the double-cover of this phony "election" and the release of the world's most high-profile political prisoner, do you really think there will be any pressure for real democratic reform from the likes of Chevron, Total and the other corporations East and West, or the regional powers China and India, all of whom have underwritten the slaughter of Buddhist monks, and the willful neglect of the victims of typhoon Nargis, and numerous other atrocities by doing uninterrupted business with the regime?

Burmese authorities ordered more than 80 AIDs patients and staff to leave a shelter hours after they gave Aung San Suu Kyi, the freed democracy leader, a rapturous welcome. The patients and staff, who need permits renewable monthly to live at the shelter on Rangoon's outskirts as they are not from the former capital, were told to go after the Nobel laureate's high-profile visit. Telegraph, 11-21-10

The government watches her obviously and aggressively, trying to cramp her style as she returns to daily life. Across the road from her headquarters, in a couple of shacks which are now an ad hoc police station, a group of plain-clothes security policemen is always gathered. They are equipped with expensive stills and video cameras, and anyone who goes in or out of the headquarters is filmed and photographed ... Like secret policemen almost everywhere, the Burmese security are at one and the same time clever and grossly obvious. Like the Chinese security police, who seem to be in charge of training the Burmese, they are often good and often incompetent at following you. Good, because they are assiduous and there are large numbers of them; incompetent, because they know they have the power to do anything they want and this makes them stand out in any crowd. Most obvious of all, many of them are equipped with garish little orange mopeds, made in China, which only the police can use in Burma ... John Seymour, Telegraph, 11-21-10

So yes, I did indeed weep tears of joy when I heard the BBC interview with Aung San Suu Kyi , and saw the sea of humanity waiting for her at her door. But no romanticism, please! The road ahead for the Burmese and all of care for them is hard and perilous. The physical freedom of Aung San Suu Kyi is such a fragile fact, and a delicate balance.

Fortunately, her spiritual freedom is adamantine, as has been proven over the many years of trial and tribulation. "Aung San Suu Kyi is already free," I wrote often, during the years of her captivity, "it is those who oppress her who are in prison." That is the truth.

This is a moment to savor, and each moment beyond the moment of her release is another moment to savor. Do not let one savory moment slip by. Celebrate this.

Remember the power of the butterfly, because that is what the struggle for human rights is; it is the power of the butterfly. So beautiful it can take your breath away, and yet so short-lived (a few weeks or months at the most); so delicate, and yet so powerful it can ride jet streams and traverse oceans, using the sun as a compass, and its own generations as its vehicle.

Yes, remember the power of the butterfly, and listen to what it teaches.

The physical liberation of even one individual (especially one who has dedicated her life to the All and the One) for however brief a time, is a profound shift in the collective psyche; and it is a shift that cannot be reversed, however long its fulfillment is delayed.

In longyis and sandals, Aung San Suu Kyi's supporters ran the 400 yards to the front gate of her home. One woman, a portrait of "The Lady" pinned to her shirt, wept as she ran, calling out her name. They pushed against the ancient, sagging bamboo fence, singing and chanting, "long live Aung San Suu Kyi".
Despite years of house arrest, and the long hours yesterday waiting for the release order to finally come, inside her lakeside compound her inner circle were not prepared. They begged the crowd to sit and to be patient while they found something for their leader to stand on. After 10 minutes, she appeared, in a lavender top, only her face and shoulders visible above the fence. The crowd roared. Here was the excitement, the enthusiasm of the Burmese people, so palpably missing from last week's election, embodied in a smiling 65-year-old woman, standing on a chair at her front gate, with flowers in her hair. Guardian, 11-13-10

NOTE: Here are just a few of over sixty Words of Power posts that have addressed the issue of Aung San Suu Kyi's freedom, and the tragic plight of the Burmese people.

While Palin Rattles A Saber She Should Not Have Been Given; Aung San Suu Kyi Quietly, Peacefully Delivers Another Blow to the Burmese Thugocracy

News and analysis from Democracy Now! - Burmese Pro-Democracy Leader Aung San Suu Kyi Freed After 15 of Past 21 Years in Detention