The True Gospel of Lilith 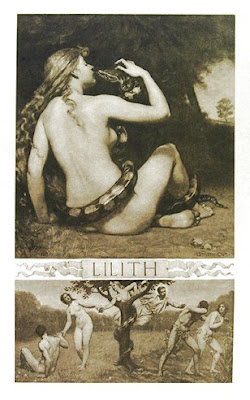 "But the Orphics say that black-winged Night, a goddess of whom even Zeus stands in awe, was courted by the Wind and laid a silver egg in the womb of Darkness; and that Eros, whom some call Phanes, was hatched from this egg and set the Universe in motion. Eros was double-sexed and golden-winged and, having four heads, sometimes roared like a bull or a lion, sometimes hissed like a serpent or bleated like a ram. Night, who named him Ericepaius and Protogenus Phaethon, lived in a cave with him, displaying herself in triad: Night, Order and Justice. Before this cave sat inescapable mother Rhea, playing on a brazen drum, and compelling man's attention to the oracles of the goddess. Phanes created earth, sky, sun, and moon, but the triple-goddess ruled the universe, until her scepter passed to Uranus." (Robert Graves' The Greek Myths) 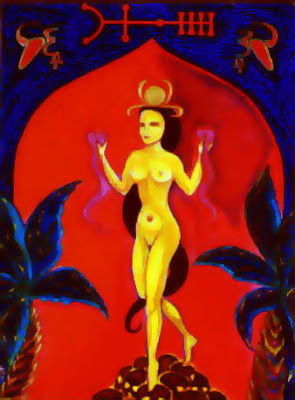 The True Gospel of Lilith

You are the original Other. And in a textbook case of projection, the People of the Lie scapegoated you as the "child killer." Cruelly ironic.

You are the Stolen Child, you are Lisbeth Salander, you are the infant sacrifice.

Banished from Olympus, banished from the Abrahamic "Heaven," kept at a discrete distance even in Shambhala, you live on in the great rainforests of the South, although known by other names.

There, your darkness is cultivated as the very self of the sacred fire, and all the great rivers empty into that jet black lustre.

Lilith. Goddess of the lost and forsaken.

Blinded by your light, the false prophets are terrified and name you "darkness." But they know nothing of either light or darkness; if they did, they would not try to separate the two.

Light and darkness are passionate lovers.

Separate one from the other, and you extinguish them both.

Evil is an abomination born from the sundering of light and darkness.

Between before and beginning, you were.

Human history is the long story of a struggle with madness, a madness that issues from within the many divisions imposed on psyche by a mad god masquerading as the progenitor of the right-hand path: spirit divided from matter, light divided from dark, life divided from death, man divided from woman, from nature, from himself.

This true Gospel of Lillith is not written on papyrus, it is inked on to the flesh of her arching back, coiling arms, and undulating belly. You catch glimpses of it in the flickering candle light of her tent, as the world spins out of control all around you.

The true Gospel of Lillith is written in an ancient language which only the future remembers.

Hasten to hear it.

Richard Power's latest book, Humanifesto: A Guide to Primal Reality in an Era of Global Peril is available now in soft cover and Kindle versions, from Amazon and elsewhere. 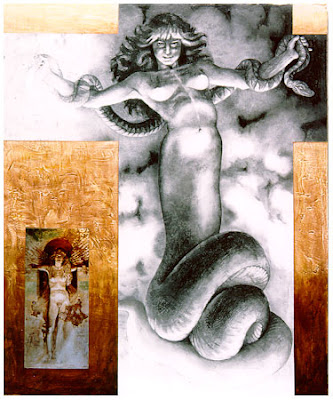 Posted by Richard Power at 8:22 AM