Take This Memory With You Into the Winter. "It Took Tremendous Courage to Take A New Approach to Our Nation-to-Nation Relationship, and We will Be Forever Grateful." 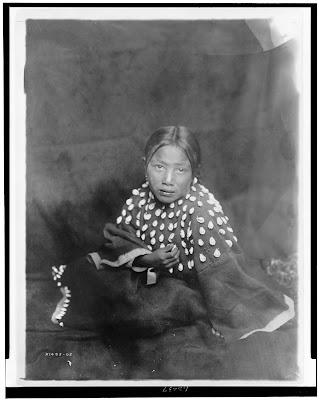 Edward S. Curtis - Sioux Child (c1905)
"Wes Clark Jr., the son of retired U.S. Army general and former supreme commander at NATO Wesley Clark Sr., was part of a group of veterans at Standing Rock one day after the Army Corps announcement. The veterans joined Native American tribal elders in a ceremony celebrating the Dakota Access Pipeline easement denial. Lakota spiritual leader and medicine man Chief Leonard Crow Dog and Standing Rock Sioux spokeswoman Phyllis Young were among several Native elders who spoke, thanking the veterans for standing in solidarity during the protests. Clark got into formation by rank, with his veterans, and knelt before the elders asking for their forgiveness for the long brutal history between the United States and Native Americans: 'Many of us, me particularly, are from the units that have hurt you over the many years. We came. We fought you. We took your land. We signed treaties that we broke. We stole minerals from your sacred hills. We blasted the faced of our presidents onto your sacred mountain. When we took still more land and then we took your children and then we tried to make your language and we tried to eliminate your language that God gave you, and the Creator gave you. We didn’t respect you, we polluted your Earth, we’ve hurt you in so many ways but we’ve come to say that we are sorry. We are at your service and we beg for your forgiveness.'"  -- Charlie May, Salon, 12/5/16


Take this memory with you into the winter. Two powerful acts, one on Sunday, one on Monday, offer compelling evidence that the great shift is already underway, even as we seemingly fall into an abyss. On 12/4/16, Barack Obama (POTUS) and the U.S. Army Corps summoned what Standing Rock Sioux Tribal Chairman Dave Archambault II called "tremendous courage," they declared that there would no further madness-driven DAPL desecration on the sacred land of the Sioux. On 12/5/16, two thousand U.S. military veterans who had traveled to Standing Rock to serve as human shields, bowed before the Sioux tribal leaders and asked forgiveness for the crimes committed against the indigenous peoples throughout our history. The rainbow serpent has awakened. The age of Pachamama is dawning, even as the holocaust that is the age of Ayn Rand rages on all around us. An evolutionary leap is coming. Breathe into it, lean forward, love one another, serve Mother Earth. A time of magic and miracles is arriving -- within us and all around us. -- Richard Power

“Today, the U.S. Army Corps of Engineers announced that it will not be granting the easement to cross Lake Oahe for the proposed Dakota Access Pipeline. Instead, the Corps will be undertaking an environmental impact statement to look at possible alternative routes. We wholeheartedly support the decision of the administration and commend with the utmost gratitude the courage it took on the part of President Obama, the Army Corps, the Department of Justice and the Department of the Interior to take steps to correct the course of history and to do the right thing. The Standing Rock Sioux Tribe and all of Indian Country will be forever grateful to the Obama Administration for this historic decision. We want to thank everyone who played a role in advocating for this cause. We thank the tribal youth who initiated this movement. We thank the millions of people around the globe who expressed support for our cause. We thank the thousands of people who came to the camps to support us, and the tens of thousands who donated time, talent, and money to our efforts to stand against this pipeline in the name of protecting our water. We especially thank all of the other tribal nations and jurisdictions who stood in solidarity with us, and we stand ready to stand with you if and when your people are in need. Throughout this effort I have stressed the importance of acting at all times in a peaceful and prayerful manner – and that is how we will respond to this decision. With this decision we look forward to being able to return home and spend the winter with our families and loved ones, many of whom have sacrificed as well. We look forward to celebrating in wopila, in thanks, in the coming days ... Again, we are deeply appreciative that the Obama Administration took the time and effort to genuinely consider the broad spectrum of tribal concerns. In a system that has continuously been stacked against us from every angle, it took tremendous courage to take a new approach to our nation-to-nation relationship, and we will be forever grateful. -- Statement by Standing Rock Sioux Tribal Chairman Dave Archambault II, 12/4/16

Richard Power is the author of eleven books, including most recently, "Cauldron Yoga, Gaian Poetics and the Way of the Ancient Future," along with the other four volumes of his "Primal Reality" series, all of which are  available in both softcover and Kindle versions via Amazon.com.

For information, visit his Amazon author's page.
Posted by Richard Power at 3:54 PM