Definition of Cassandra
1: a daughter of Priam endowed with the gift of prophecy but fated never to be believed
2: one that predicts misfortune or disaster

Cassandra was a Trojan princess. Her brother Hector was a great warrior. Once upon a time, Cassandra fell asleep in a temple. She woke up with snakes coiling all over her. Her inner eye had suddenly opened. She had received the gift of prophecy. She could see the future. According to the official, patriarchal version of her legend, the god Apollo had bestowed this gift upon her, and then, after she spurned his lustful advances, he had cursed her so that her prophecies although painful accurate would never be believed. Of course, this version is a lie. Just as it is a lie that the Creator had made Eve from one of Adam’s ribs. Just as it is a lie that the goddess Tara was born from the single tear of Avalokiteshvara. If you have ever truly opened to the magic of the deep forest, if you have even truly opened to the majesty of the sea, you know that all of the great occult powers, all of the siddhis, all of the mysteries of life, flow directly from Primordial Mother, the Creatrix, the Dark One. Beyond. Before. Here and Now. The snakes were drawn to Cassandra during her transformative sleep. They felt what was happening. They were the heralds of her heralding. They were basking in the inner sun of this woman, coiling in her arm pits, on her belly, between her breasts, on her yoni. They could feel the herstoric moment. It called them forth as witnessing presences.

Yes, this gift of true prophecy that Cassandra received was both a blessing AND a curse. But the curse was not the work of a spurned lover god, it is inherent in the blessing itself. They are inextricably bound. The true prophet or prophetess sees a vision of some great catastrophe and wants to warn the nation that she or he loves. But all too often, the warning falls is mocked, ignored or downplayed. Because human nature (magical and muggle alike) usually chooses numbness over pain and comfort over a challenge. Until it is too late. Cassandra saw the sacking of Troy before it happened. She knew there were Greek warriors concealed inside the gift horse that the Trojans unwittingly brought inside their fortress walls. But her warnings were met with derision. She even ran toward the gift horse with an axe and a burning torch, but the Trojans restrained her. She was seen as a madwoman. She was locked up. Cassandra travelled a hard road. After Troy fell, she was first raped by Ajax, one of the conquering Greeks, and then taken as a concubine by Agamemnon, another of the conquering Greeks.

Her ghost has been with me throughout the years. In the late 1990s, I felt her with me as I warned that the Climate Crisis was our greatest national security threat, that Russian and Eastern European organized crime were far more dangerous to us than radical Islamic terrorism, and that cyber war would threaten democratic societies and become an integral element geopolitical struggle. My warnings were not heeded. All of what I prophesied back then has indeed come to pass. And now, in a twist of the bitterest irony, my latest batch of warnings are tempered with declarations of promise and optimism (yes, we are on threshold of great good, miraculously), and yet, these declarations too are being tuned out by too many who could make a profound difference in the world around them, too many who would rather choose delusion over reality and distraction over responsibility. In the late 1990s, and on through the first decade of the 21st Century, I was speaking primarily to government officials and corporate executives. Since the Voice said “It’s time to make your move” in 2010, I have been speaking primarily to a very different audience, less mainstream, more counter culture, younger, drawn from intersecting circles, e.g., the yoga scene, Burning Man, the Arts, social media, etc. In 2010, I spoke of “the Singularity in Anticipation of Itself,” by 2017, the Singularity had arrived its fullness and we had all crossed over the Event Horizon. The tortured stretch of time from 2016 to 2020 was a wormhole. In the corridor from November 2020 to January 2021, we emerged from the mouth at the other end of that wormhole. And that is where we are in this moment, from this inflection point, we could move on into a healthier republic, and a better world, or we could plunge beyond all help into an inescapable pit, a hell-realm in which your worst nightmares would be institutionalized. In this period, however long it lasts, the Demographic Shift in the U.S. Body Politic is aligned with the Arc of Human Evolution.

What do I mean when I say the U.S. Body Politic is aligned with the Arc of Human Evolution? With each succeeding generation, over the last few decades, young voters, female voters, African-American voters, which means many more progressive voters, environmental and economic justice voters, human rights voters, smash the patriarchy voters have been an increasingly significant element of the electorate.
#MeToo fueled voter turnout in the 2018 mid-term elections and resulted in the Democratic Party’s rise to power in the House of Representatives. #BlackLivesMatter fueled voter turnout in the 2020 presidential election and resulted in the not only the election of Biden-Harris but also Democratic Party control of the Senate (albeit by the single thread of the Vice-President’s tie breaking vote). The trend is inexorable. It is no longer possible for a Republican Party based on white supremacy, male dominance and AnyRandism to win a national election in the U.S.A. IF there is high voter turnout. That’s why they are propagating the “Big Lie” that the 2020 election was stolen from Trump, that’s why in the months since Biden-Harris (and Ossoff and Warnock) were sworn in the Republican have been furiously pushing hundreds (literally) of vote suppression bills through state legislatures. It is vital that high level of engagement we rode in 2018 and 2020 be kept going in 2022 and 2024. If young voters, female voters, African American voters, progressive voters, environmental and economic justice voters, human rights voters, smash the patriarchy voters continue to vote in unprecedented numbers, despite the obstacles that currently being deployed to waylay them, the American people, and by extension, the species itself (we are the melting pot, after all) will have changed the underlying fundamentals and altered the spectrum of political debate for the foreseeable future, and that means that there actually could be a future for our species and for the planet as we know it. If we fail, then America, and by extension, our species and countless others, and the planet itself, will fall through into the abyss. It really is that simple, it really is that stark.

Now, as I mentioned, within the interpenetrating circles of my influence, there are some that tune out this vital message concerning of our collective circumstances and responsibility. These denialists are of two types. Some among us choose to tune out “politics,” thinking themselves somehow beyond it. But politics is just the subplot of GOVERNANCE, so when you tune out politics you are effectively saying that you don't care whether it is sociopathy or altruism that guides our way. Seriously. Politics is as vital and holy as art, or science, or mysticism itself. This is an occult truth that too many refuse to acknowledge. And, of course, I mean a politics predicated on altruism.

Perhaps the most dangerous “spiritual” delusion of all is thinking that “Us vs. Them” is unholy, and that you are somehow above this "duality." This is pure escapism. "Partisan" is a beautiful, HOLY word. Unlike these denialists who imagine themselves somehow above ideological struggle and beyond all "labels," there are those who are so consumed in this struggle that they deem themselves the sole arbiters of ideological purity, e.g., those leftists who hold liberals and centrists in such contempt that they would rather forfeit achieving half or even two-thirds of their policy agenda than comprise and achieve consensus with liberals, centrists and yes, even conservatives motivated by love of country. But politics isn’t rooted in purity tests, it is rooted in survival skills and alliance-building. True rEvolutionaries know that progress requires both great leaps and incremental steps. Each great leap is preceded by countless incremental steps. Each series of incremental steps contains a cloaked great leap. More occult truths.
Here and now, in America, in the second decade of the 21st Century, if you tune out politics, if you refuse to engage, if you refuse to choose the side of altruism, or you are politically engaged but you refuse to ally with those who do not meet your own narrow ideological definition of ideological purity, you are contributing to the DEVOLUTION of the species, you are ceding power to racism and misogyny, you are servicing patriarchy and sociopathy. Another occult truth.
Don’t spiritually by-pass the great challenges of our time. Politics is a subset of governance. Governance determines whether Sociopathy or Altruism rule. Politics is a mystical art and a sacred responsibility.
Love is intolerant. It does not indulge delusions that result in mass suffering, e.g. Climate Denialism, Pandemic Denialism and Anti-Vaxerism. There are no "alternate realities," or “alternate facts.” Reality is not a “viewpoint.” Reality is like Mathematics. It Just Is.

Your mystical poetry is not one iota more relevant to the arc of human evolution than protecting the votes of African Americans. Period. Full stop. If you don’t engage in this struggle to overcome Authoritarianism, if you feel yourself beyond politics, you are spiritually by-passing, and in doing so, you are enabling patriarchy, sociopathy, misogyny, racism, homophobia, transphobia ...

We have very little time left. We have this 2022 mid-term and the 2024 presidential race to finish the task of demolishing the zombie death cult formerly known as the Republican Party, and we have the next ten years at best meet the planetary Climate Emergency in a real way; this means undertaking a sweeping transformation of our society and our economy and leading the world in doing the same.

If we fail in either of these great endeavors, the future will be an utter, unending horror. If we succeed, we will strengthen and accelerate the arc of human evolution. It is all that simple. Do not miss this moment. Do not turn away. Do not embrace delusion.
7 Reasons to Read "Secret Engine of the World: Further Notes on Primal Reality, Gaian Politics & the Arc of Human Evolution": 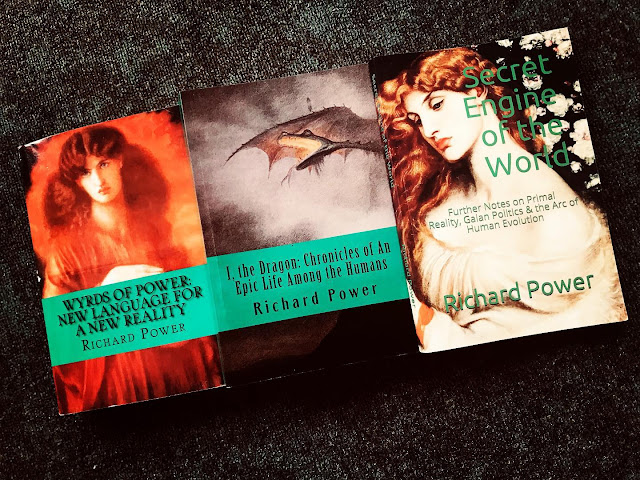