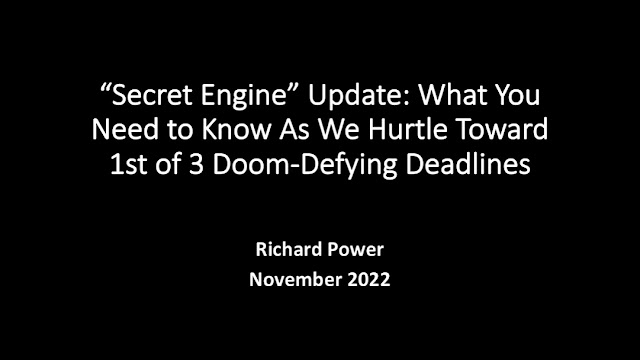 An orc assassination attempt on the Speaker of the House of Representatives. 2nd in line of succession. Most powerful female political leader in U.S. history. Have you voted? Do u understand where we are? Or have you chosen delusion & denial?

If we lose the House, it will be because of gerrymandering and dark money. If we lose the Senate, it will be because of dark money & the mainstream news media’s normalization of insane, dangerous candidates.
We must embrace the reality that the majority want sanity & decency & yet at the same time prepare ourselves, inwardly, for a potential second Civil War, one in which we will the U.S. Federal government and those states loyal to the union must confront the Neo-Confederacy and its sympathizers. Because even though we are in the majority (by a lot), the system is skewed for minority rule i.e. white male privilege, patriarchy & oligarchy. Unmoored from reality & contemptuous of our democratic institutions, the Death Eater overlords and the Orc legions seek to impose racist & misogynistic oppression & remove any and all governmental constraints on predatory capitalism.
This United Front for Sanity & Decency can only be overcome if it fails itself. Do not succumb to despair. Do not choose delusion or denial. “There is no hiding place down here,” as the African-American spiritual declares. You must choose sides & fight. 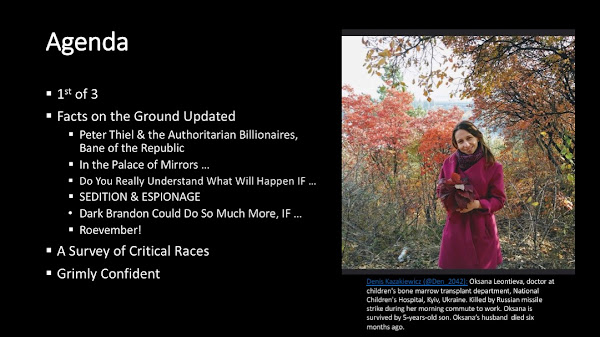 VIDEO: "Secret Engine" Update #5: What You Need to Know As We Hurtle
Toward 1st of 3 Doom-Defying Deadlines
These are my notes for the talk. I post them here in the hope that they might be useful to you for your own clarity and in your efforts to engage other voters.
All of the images included in the first of these five presentation were from tweets related to Russia's genocidal attack on Ukraine. The images I selected were all of women, women journalists, women in the military, civilian women casualties. Why? Because victory in this war is vital for the future of the West and of democracy and because the leadership of women is vital for the future of all life on this planet.  The images included in all four subsequent presentation are also of women (except for two slides, lol); the women whose images I share in this presentation are all agents of the Ascendant Feminine, whether in the  United States, or Ukraine, or Belarus or Russia itself, or from Africa or Iran.
Yes, it is all one struggle, one great conflict, one shining portal to step through into a real future. 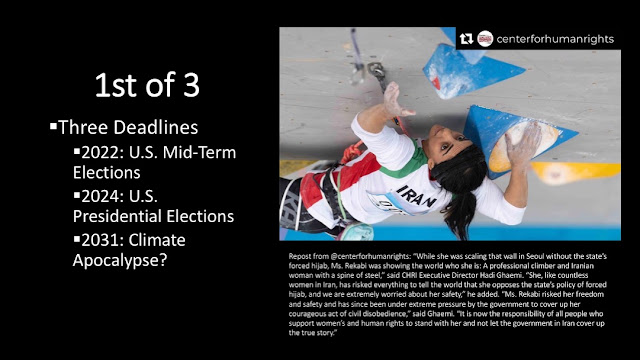 1st of 3
These five talks are focused on this year's mid-term elections in the United States, the first of the three deadlines I outlined in "Secret Engine of the World." These three deadlines are either doom-defying or doom-defining, depending upon outcomes. It is truly up to us, by us I mean what I call the United Front for Sanity and Decency (Left, Liberal, Center and True Conservative).
For SCIENCE. For HUMAN RIGHTS. For GAIA. For SANITY and DECENCY.
Three Deadlines - 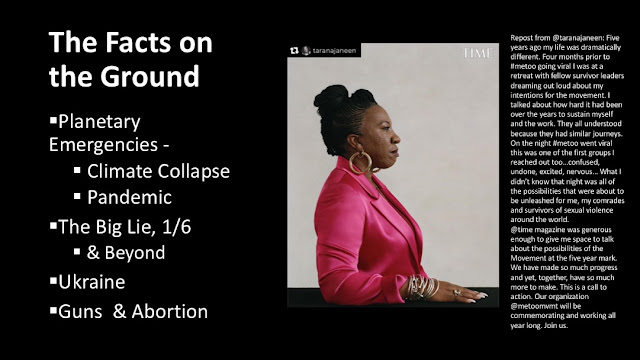 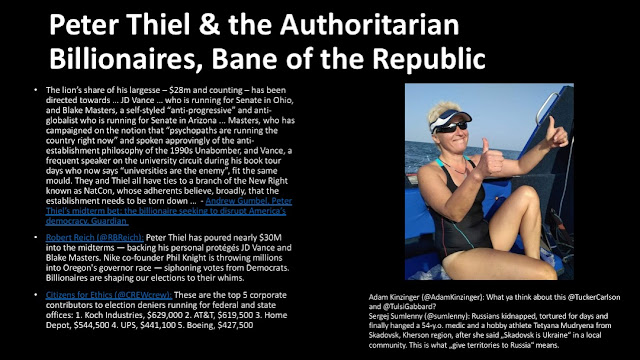 Peter Thiel & the Billionaires, Bane of the Republic 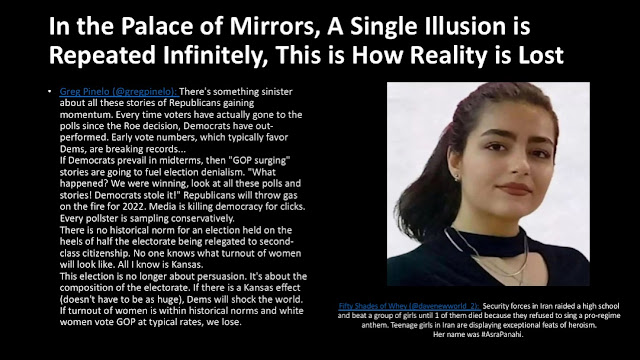 In the Palace of Mirrors ...
Lawrence on what was actually 'painful to watch' in Fetterman-Oz debate
MSNBC’s Lawrence O’Donnell explains why the “painful to watch” reaction to
Pennsylvania’s Senate debate between John Fetterman and Mehmet Oz ignores
the history of illness & disability in the Senate and White House. 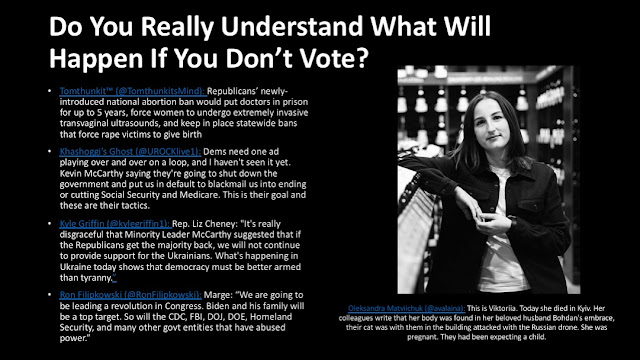 Do You Really Understand What Will Happen IF ... 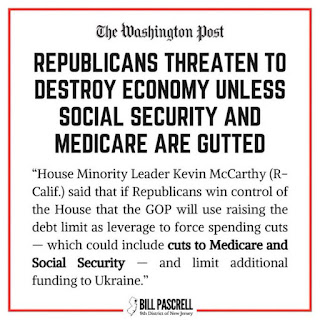 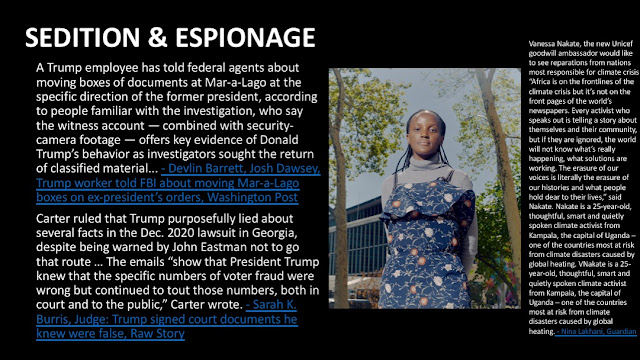 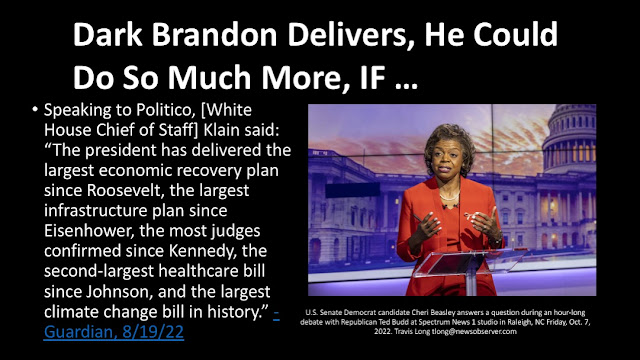 Dark Brandon & the Democrats Deliver, They Could Do So Much More, IF ...
Dark Brandon standing in the breach, on the issue of women's reproductive rights:

FULL SPEECH: U.S. President Joe Biden gave an update on what his administration is doing to preserve access to abortion. 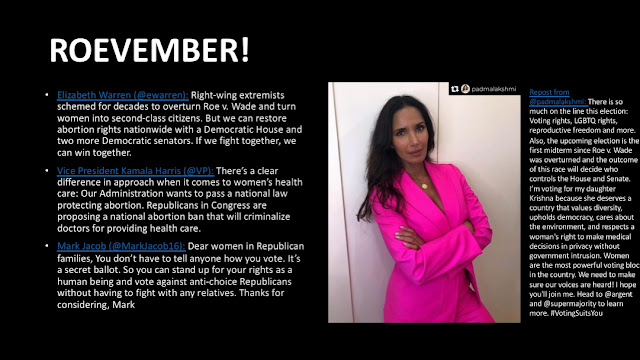 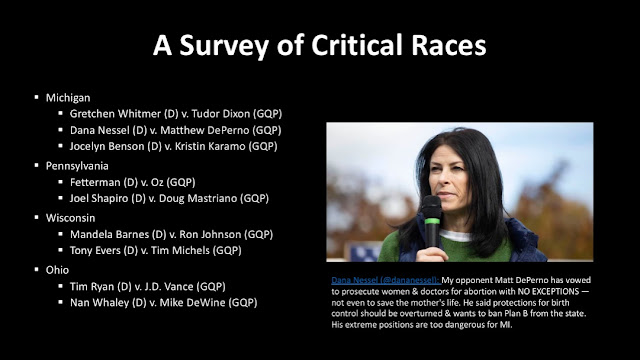 In each update, my "Survey of Critical Races" has focused on races for Senator and Governor, but of course, there are dangers all down the ballet. It is imperative to vote the straight Democratic ticket (unless you're in Utah) up and down the ballot.

Exclusive: Hillary Clinton WARNS about MAGA Secretary of State Candidates in URGENT MESSAGE
‘A Five-alarm Fire’: Michigan’s Jocelyn Benson On Election Deniers Running For Secy. Of State
Nearly half of the nominees for Secretary of State nationwide believe in the Big Lie, according to the report “Replacing The Refs.” Michigan Secy. of State Jocelyn Benson discusses her election denier opponent and how she plans to defend voters from far-right harassment.
Michigan
Election Denier Tudor Dixon
Pennsylvania
Puppies

Jo (@JoJoFromJerz): Wow — this is huge… Mike Holmgren, one of the greatest coaches in football history (who’s also a Wisconsinite) just came out in support of Mandela Barnes! He’s also hosting a major online event this weekend. This is awesome! Please share this far & wide. 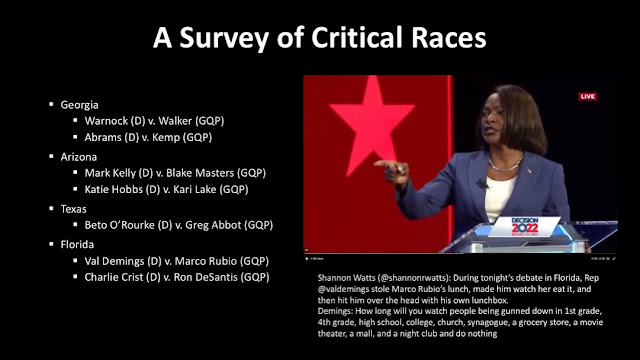 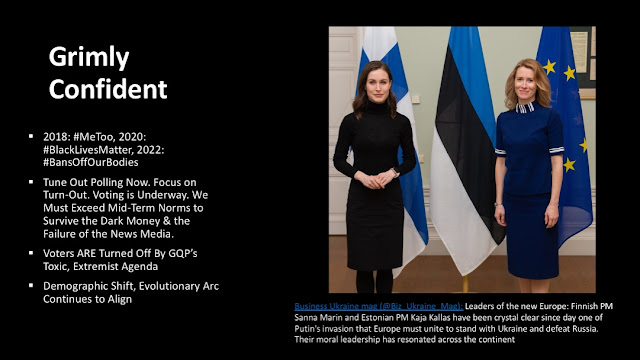 Grimly Confident
"The country is split down the middle.' No, it isn't.
The country is split. Yes. But it's split 70% to 30%, and we're the 70%.
That's what Lando was telling Poe at the dire moment in The Rise of Skywalker:
"There are more of us ..."
But you have to vote, and you have to vote Democratic, and you have to vote all the way up and down the ballot, you have to vote for the election officials and the school board, you have to vote, you have get your friends and family to vote, you have to pull some people out of their dream states, out of their fantasies, and you have to pull other people out of their misguided sense of ideological purity, you've got to get people to vote. Because in their common sense, in their hearts, most people, the vast majority of Americans, are for abortion rights, they're for gun control, they're for climate change action, they're for protecting the sanctity of the vote, they're for the rule of law. These are not things that the majority of Americans are divided over. But as I talked about in the first presentation, the country in its inception was hard-wired to protect minority rule, and they've done everything they can, and they are getting more and more desperate (the oligarchs, the patriarchy, the guardians of white privilege) as the demographics shift continues in the body politic, because they can't win real elections anymore, so now they just want to throw away the elections completely, they want to say the state legislatures can throw away the ballots and declare a winner for their state. (And they control many of those state legislatures, even in blue and purple states, because of gerrymandering and dark money.) This has to end here and now.
I know many of you have been told most of your life that 'this is the most important election you'll ever vote in,' and I know many of you are tired of hearing it. Well, you know every time you were told that it was true, it wasn't hyperbole. We don't keep saying it over and over again, because it doesn't get done, we have said it over and over again because it's a long arc. That's what the Doctor said, that's what Dr. King meant. It wasn't a rhetorical flourish, it was a fact, and a prophecy, 'the arc of the moral universe is long but it bends towards justice.' This is what he meant. We are on that arc, living and struggling on that arc, we are leaning forward on that arc. This is what he meant, that you would be here many times in your life, 'this is the most important election of your life.' The arc of the moral universe is LONG, but it bends towards justice, it curves towards justice. With each election victory, the arc accelerates. We can do this, if we get through 2022 and 2024, we will have broken the back of fascism, we will have broken the fever, we will have routed the orcs.
-- Richard Power, Yoga & Meditation Teacher, Writer, Speaker, Global Intelligence & Security Expert. "Secret Engine of the World: Further Insights into Primal Reality, Gaian Politics & the Arc of Human Evolution" (2021) is available from Amazon.com
See Also
"Secret Engine" Update #4 (10/15/22): What You Need to Know As We Hurtle Toward 1st of 3 Doom-Defying Deadlines

"Secret Engine" Update #1 (7/22/22): What You Need to Know As We Hurtle Toward 1st of 3 Doom-Defying Deadlines
[All images are sourced and published as Fair Use.]
Posted by Richard Power at 4:46 PM