Wangari Maathai Will Not Carry Olympic Torch, In "Solidarity with Other People on the Issues of Human Rights in ... Darfur, Tibet & Burma ..." 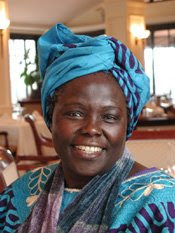 Wangari Maathai Will Not Carry Olympic Torch, In "Solidarity with Other People on the Issues of Human Rights in ... Darfur, Tibet & Burma ..."; Meanwhile, Leading Marketers are Getting Very Concerned

Like Al Gore and the IPCC scientists who won the 2007 Nobel Peace Prize, the 2004 Nobel laureate, Wangari Maathai, received the award for working to save the environmment of the planet.

Like Gore and the IPCC, Maathai understands that in the 21st Century, human rights and environmental security are interdependent, and that you cannot achieve peace without the cultivation of both.

Kenya's Nobel Peace laureate Wangari Maathai told AFP Thursday she had pulled out from the Olympic torch relay in which she was due to take part over the weekend in Tanzania, citing concerns for worldwide human rights.
"Yes, I have pulled out," Maathai told AFP by telephone from the Tanzanian commercial capital Dar es Salaam.
"I have decided to show solidarity with other people on the issues of human rights in Sudan's Darfur region, Tibet and Burma." ...
The torch's relay has been dogged by protests in London and Paris, and in San Francisco where on Wednesday a massive police presence and sudden route change made the torch all but invisible to the public. ..
"China has tried to address these issues of human rights. But these issues, especially the situation in Tibet, seem to be escalating even though the Dalai Lama has offered to talk," she said. Agence France Press, 4-11-08

Meanwhile, Mia Farrow reports that the business community has good reason to be concerned -- there is no doubt that sponsors will suffer in the marketplace:

Tony Chapman, Founder and CEO of Capital C, one of Canada's leading marketing firms, today cautioned Canadian marketers to carefully consider the dangers in fulfilling their Beijing Olympic marketing programs, noting, "Olympic sponsors are getting caught in an ever tightening vice from which there may be no escape."
Chapman believes that despite the enormous market potential the Beijing Olympics opened up to sponsors, the impact and dominance of consumer driven, viral campaigns and their ability to affect global consumer behaviours far outweigh the market burst which sponsors expected from their Olympic sponsorship.
"Indeed," says Chapman, "the Tibet controversy currently interrupting the torch journey is inspiring a reaction of global proportions. It is becoming deafening as it is digitally enabled and swirls around the world, collecting images, commentary, evidence and an ever growing community of supporters.
"Conversations which started with Tibet and Darfur will cross over to China's environmental record, its treatment of workers, its foreign policy and every other cause imaginable, ultimately becoming an unstoppable force impenetrable
by spin doctors, brand managers, or even the most elaborate marketing
campaigns." CNW, 4-10-08

See also Why Protecting the People of Darfur, Tibet & Burma is in Our Own Self-Interest; & What These Crises Tell Us about Our Own Slide into the Pit.

Some Tibet-Related Words of Power Posts

In Burma & Sudan, Business As Usual -- What Must & Can Be Done Now!