UPDATE: As of early am 5-6-09, CNN is reporting that Roxana Saberi has ended her hunger stike, at the request of her parents. The story does not mention the forced-feeding reported on 5-5-09. Why? If it was inaccurate, it should be noted as inaccurate, if it is unverified, it should be not as yet unverified. Strange that it is not mentioned at all. 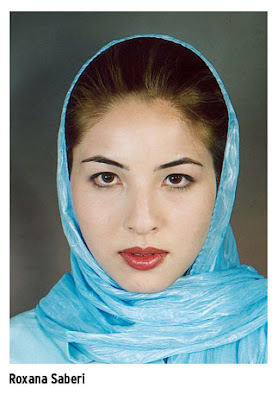 And never think your voice won't count. The government considers that every single call represents 10,000 people (voters). The late Sen. Paul Simon said, of the Rwandan genocide-if just 100 people from each district had called or written, our government would have taken action to prevent the slaughter in Rwanda. Mia Farrow, 5-5-09

In Connecticut, Mia Farrow is on Day 9 of her hunger strike for the people of Darfur.

"Please, please contact the White House," she writes. "Leave word that it is not acceptable for you to watch a million or more Darfuris die of starvation, thirst and disease." You can contact the White House online (www.whitehouse.gov/CONTACT/) or by telephone (202-456-1111). She is calling for Obama and other world leaders to work urgently for the return of the 16 humanitarian agencies that were driven out by the Thugocracy in Karthoum. (I have included her latest video blog below.)

I urge you to heed her request.

Meanwhile, in Iran, photo-journalist Roxana Saberi, who has gone on her own hunger strike to protest her imprisonment by the misogynistic regime in Tehran, is being force-fed intravenously.

Here is an excerpt from Der Spiegel's interview with Saberi's father:

Der Spiegel: SPIEGEL: Legal officials in Tehran dispute the fact that your daughter is actually refusing to eat.
Saberi: My daughter is a very determined woman. She said that she wants out of the prison -- "dead or alive". As her parents, we take that very seriously and we are very concerned. My wife and I have attempted to talk Roxana out of this action. But as far as I know, she has only been drinking water with a little bit of sugar for the past 10 days. Der Spiegel, 5-4-09

And yet today in the US mainstream news media more ink and air time has been given to the death of of actor, comedian and chef Dom Deluise than to either of these two stories of personal courage and conscience.

Our culture too is dying of malnourishment.