Helen Keller was Not Deaf or Blind; But Much of Our Body Politic Is, Otherwise We Would Be Hearing the Voices of Vidal & Fisk 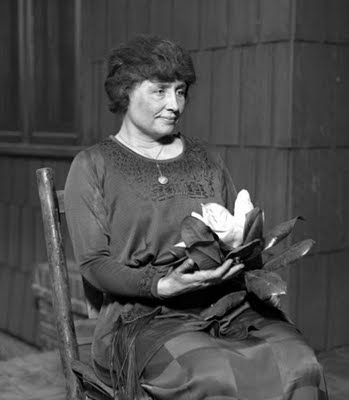 Although the world is full of suffering, it is full also of the over- coming of it.

Every- thing has its wonders, even darkness and silence, and I learn whatever state I am in, therein to be content

The best and most beautiful things in the world cannot be seen or even touched. They must be felt within the heart.

We could never learn to be brave and patient, if there were only joy in the world.

When one door of happiness closes, another opens; but often we look so long at the closed door that we do not see the one which has been opened for us.

Security is mostly a superstition. It does not exist in nature.... Life is either a daring adventure or nothing.

Helen Keller was Not Deaf or Blind; But Much of Our Body Politic Is, Otherwise We Would Be Hearing the Voices of Vidal & Fisk

Awarding President Obama the Nobel Peace Prize is powerful magic. I hope it has the desired effect of empowering and protecting him in his dealings with those who see force as the first choice instead of the last resort, and at the same time pressing him to not follow the line of least resistance on human rights, economic security, climate change and other vital issues.

The bold and inspiring gesture could not come at a more critical moment. From where we are right now, with the proper leverage we could turn slowly turn from bad to better; without it, we will quickly slide from bad to worst.

In an provocative interview with the Times of London, one of our literary giants, Gore Vidal has laid it out:

Today religious mania has infected the political bloodstream and America has become corrosively isolationist, he says. “Ask an American what they know about Sweden and they’d say ‘They live well but they’re all alcoholics’. In fact a Scandinavian system could have benefited us many times over.” Instead, America has “no intellectual class” and is “rotting away at a funereal pace. We’ll have a military dictatorship fairly soon, on the basis that nobody else can hold everything together. Obama would have been better off focusing on educating the American people. His problem is being over-educated. He doesn’t realise how dim-witted and ignorant his audience is. Benjamin Franklin said that the system would fail because of the corruption of the people and that happened under Bush.” Times Online, 9-30-09

And not only are we "rotting away" and perhaps stumbling toward "military dictatorship," the Almighty Dollar isn't almighty anymore. Indeed, the All-Seeing Eye on the back of the greenback seems to have blinked.

In his recent article on "The Demise of the Dollar," one of our journalistic giants, Robert Fisk writes:

In the most profound financial change in recent Middle East history, Gulf Arabs are planning – along with China, Russia, Japan and France – to end dollar dealings for oil, moving instead to a basket of currencies ...
Secret meetings have already been held by finance ministers and central bank governors in Russia, China, Japan and Brazil to work on the scheme, which will mean that oil will no longer be priced in dollars ...
The decline of American economic power linked to the current global recession was implicitly acknowledged by the World Bank president Robert Zoellick. "One of the legacies of this crisis may be a recognition of changed economic power relations," he said ... Robert Fisk, The Independent, 10-6-09

Note both of these pieces are from the British press.

Over the years, many of us in the the alternative news media and progressive blogosphere have focused about the failure of the US mainstream news media (MSM) in its vital role as watchdog of democracy, and of the dreadful consequences, i.e., the informational malnourishment and diminished capacity of the US body politic.

But, of course, it is not only the MSM that has failed us, it is also the educational system.

The demise of the MSM is the result of the corporatist monopolization and the organizational cultures that resulted from it.

The demise of the US educational system is the result of the right-wing's decades-long assault on the role of government and the meaning and value of taxes, as Paul Krugman elucidates in a recent op-ed piece:

American education was, overwhelmingly, the rise of public education — and for the past 30 years our political scene has been dominated by the view that any and all government spending is a waste of taxpayer dollars. Education, as one of the largest components of public spending, has inevitably suffered.
Until now, the results of educational neglect have been gradual — a slow-motion erosion of America’s relative position. But things are about to get much worse, as the economic crisis — its effects exacerbated by the penny-wise, pound-foolish behavior that passes for “fiscal responsibility” in Washington — deals a severe blow to education across the board ...
There’s no mystery about what’s going on: education is mainly the responsibility of state and local governments, which are in dire fiscal straits. Adequate federal aid could have made a big difference. But while some aid has been provided, it has made up only a fraction of the shortfall. In part, that’s because back in February centrist senators insisted on stripping much of that aid from the American Recovery and Reinvestment Act, a k a the stimulus bill. Paul Krugman, The Uneducated American, NY Times, 10-8-09

The toxic cocktail of a compromised news media and an abandoned educational system has not only blunted our sharp edge in science and technology, it has also robbed us of vital insights into the character and heritage of our nation.

How many of our fellow citizens understand that Thomas Jefferson considered newspapers more important than governments (see 1787 letter to Edward Carrington) and said that banks were more dangerous than standing armies (see 1816 letter to John Taylor)?

It is in this context that I draw your attention to a revered icon of American life, Helen Keller. Indeed, she was recently honored with a bronze statue at the US Capitol. But in the laudatory speeches that accompanied the unveiling of the statue, no mention was made of her lifelong commitment to socialism, pacifism, feminism, labor activism and sex education. What little MSM coverage of the event there was did not mention her radical politics either.

Here is are some excerpts from a Democracy Now! interview with Kim Nelson, a Professor at University of Wisconsin (Green Bay), who has authored numerous books on Keller's life and work:

GONZALEZ: Can you tell us about this other side of Helen Keller that most Americans probably are not aware of?
KIM NIELSEN: Sure. Helen Keller was an incredibly active, political, passionate woman. She became involved in politics very early as an adult and continued throughout the rest of her life. Once she was finished with college, she became incredibly concerned about economic inequalities, as you said, joined the Socialist Party, affiliated with the IWW, became a suffragist on behalf of women’s suffrage. She sought to educate women about venereal disease, a very taboo topic at that time, and continued similarly the rest of her life ...
JUAN GONZALEZ: She wrote some essays, including “Why I Am a Socialist," and laying out her viewpoints on her political—her adopted political views?
KIM NIELSEN: She did. She wrote the essay, as you said. She wrote quite a bit. She wrote about working conditions. She wrote about the lives of people who were poor. She wrote about living conditions. She wrote some about racial inequalities. It was incredibly frustrating to her that she had a hard time selling those things. People wanted to read about her life as a woman with a disability, particularly her life as a child with a disability. But she was able to market some of those materials. She gave speeches. She spoke at rallies. She did as much as she could. And then, in the Teens, she went on the vaudeville and the Chautauqua circuit and spoke quite a bit there about socialism, about war. She spoke out against World War I as a pacifist. She critiqued it as a money-making venture for industrialists. And she gathered great crowds wherever she went ...
JUAN GONZALEZ: And, of course, her involvement in the feminist movement and the battle over women’s rights to vote, but at the same time she was critical of the—of just seeing democracy as exercising that right to vote.
KIM NIELSEN: Yes, she was very interested in women’s rights and suffrage and worked on behalf of that in the Teens, nineteen-teens. She was affiliated with the National Women’s Party and Alice Paul, sort of the radical arm of the suffrage movement, and was picketing the White House. She encouraged women to vote in the 1920s. She felt that voting was important, but, as you said, not all. When she traveled post-World War II, she traveled over fifty countries around the globe and always visited women’s organizations there, feminist organizations in the countries to which she traveled. She sought to encourage women in those countries to vote, particularly in countries where women could not vote. She encouraged women’s employment, women’s education and, as I said, women’s education about their bodies and physical illness, venereal disease, support for women in prenatal care. Those were always very important issues to her.
Democracy Now! 10-8-09

Posted by Richard Power at 3:13 AM