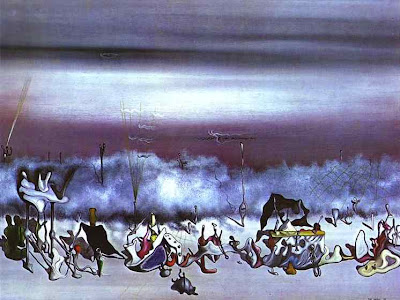 "[Ayn] Rand's fingerprints are all over the recent Goldman story." Matt Taibbi, Guardian/UK, 4-24-10

“It is very similar to late Weimar Germany ... The parallels are striking ..." Chris Hedges, Noam Chomsky Has ‘Never Seen Anything Like This,' Truthdig, 4-19-10

Here we are. It has all come to this.

Bill Moyers: And you say that these, this oligarchy consists of six megabanks. What are the six banks?
James Kwak: They are Goldman Sachs, Morgan Stanley, JPMorgan Chase, Citigroup, Bank of America, and Wells Fargo.
Bill Moyers: And you write that they control 60 percent of our gross national product?
James Kwak: They have assets equivalent to 60 percent of our gross national product. Bill Moyers: Six Banks Control 60% of Gross National Product -- Is the U.S. at the Mercy of an Unstoppable Oligarchy?, AlterNet, 4-23-10

Our people’s jobs have been shipped overseas, our people’s health insurance costs have grown like a malignant tumor, our people’s houses have slipped underwater in a deluge of “esoteric” financial instruments, our people’s public school systems have been decimated, our people’s critical infrastructure has been left to rot, and our people’s treasury has been gutted for unnecessary wars and disproportionate tax-cuts – all for the greater profit of a very few, who were already wealthy.

So, yeah, right, let's start stopping Mexican-Americans in the street and demanding that they show proof of citizenship. Yes, let’s get the rabble all whipped up about the illegal immigration of brown-skinned people, and anything else that will keep their attention distracted from the actual causes of our decline and fall.

In the Randian ethos, called objectivism, the only real morality is self-interest, and society is divided into groups who are efficiently self-interested (i.e, the rich) and the "parasites" and "moochers" who wish to take their earnings through taxes, which are an unjust use of force in Randian politics ... [Ayn] Rand's fingerprints are all over the recent Goldman story. Matt Taibbi, Guardian/UK, 4-24-10

By electing Obama-Biden instead of McCain-Palin in 2008, we succeeded in avoiding utter ruin. But did we simply delay the inevitable? Or have really turned the corner on our way back to some continuity of sane governance? That remains an open question. The 2010 mid-term elections will tell us more.

As I write this, I am in an airliner high above the country I love; in the galley, a flight attendant is reading Sean Hannity’s Conservative Victory. Profoundly disturbing to see the witless leading the clueless toward oblivion.

The Obama administration and the Democratic Party establishment have been dangerously compromised by decades of pursuing corporatist cash to be competitive in the depraved contest that is our campaign financing system; worse yet, because of the abominable SCOTUS decision on United, they will soon face a choice between even greater compromise and appeasement, or losing their current cash advantage.

And what of the Republicans? Well, they are gone. The party of Dwight Eisenhower, Everett Dirksen, Edward Brook, Earl Warren, Barry Goldwater, Nelson Rockefeller, Henry Cabot Lodge, Elliot Richardson, and even Robert Dole, all gone; supplanted by something that for years now I have referred to, soberly and sadly, as the Cult formerly known as the Republican Party.

The Republican Governors Association has embraced the symbolism of Fawkes, launching a rather striking website, RememberNovember.com [ed. note: warning: really creeepy!], with a video that showcases far more Hollywood savvy than one can usually expect from Republicans. Again, the Fawkes tale has been twisted a bit. This time, President Obama plays the role of King James, the Democratic leadership is Parliament, and the Republican Party represents the aggrieved Catholic mass. Michael Shirer, Swampland, Time, 4-23-10

Throughout the Bush-Cheney era, Words of Power called for criminal investigation of the election fraud of 2000 and 2004, only to see cowardly Democrats assist in the destruction of ACORN, falsely accused of having perpetrated voter fraud among other things.

During the Bush-Cheney era, Words of Power also warned that Glenn Beck was not only unstable, he was being thrust into the mainstream, e.g., Is Glenn Beck Going John-Hickley-Jr.? 7 Stories CNN Could Have Aired Instead of Beck's Eco-Nazi Conspiracy Theory (5-4-07) (that was before Beck amassed his personal fortune of tens of millions of dollars, and is now on the cover of Forbes Magazine).

So far, Obama-Biden has offered little more than ceremonial resistance, and incremental reform; it is unclear that they have any better options available to them, however easy it is to second-guess at them from the luxuries of exile, obscurity or even privileged punditry.

No, it is not enough, but it is buying us time; precious time desperately needed to prepare the progressive movement for what lies ahead.

I do not know what Obama-Biden should do; but I do know what those of us who want to rescue the temple of this republic from the money-lenders should do.

We must be loud, and vigilant, informed, and fearless in our dissent, and at the same time, we must be loud, vigilant, informed and fearless in our determination to protect Obama-Biden, and the Democratic majorities in the House and Senate, from what is being hurled against them, because in so doing we are protecting ourselves and all that we cherish from the abomination that is already scratching at the door.

“It is very similar to late Weimar Germany ... The parallels are striking ... The United States is extremely lucky that no honest, charismatic figure has arisen,” Chomsky went on. “Every charismatic figure is such an obvious crook that he destroys himself, like McCarthy or Nixon or the evangelist preachers. If somebody comes along who is charismatic and honest this country is in real trouble because of the frustration, disillusionment, the justified anger and the absence of any coherent response ... I don’t think all this is very far away ... Chomsky reserves his fiercest venom for the liberal elite in the press, the universities and the political system who serve as a smoke screen for the cruelty of unchecked capitalism and imperial war. He exposes their moral and intellectual posturing as a fraud ... “I don’t bother writing about Fox News,” Chomsky said. “It is too easy. What I talk about are the liberal intellectuals, the ones who portray themselves and perceive themselves as challenging power, as courageous, as standing up for truth and justice. They are basically the guardians of the faith. They set the limits. They tell us how far we can go. They say, ‘Look how courageous I am.’ But do not go one millimeter beyond that. At least for the educated sectors, they are the most dangerous in supporting power.” Chris Hedges, Noam Chomsky Has ‘Never Seen Anything Like This,' Truthdig, 4-19-10

Here's Jim Harrison's extraordinary 4:24 video, American Grace, which I have embedded below. It should go viral, please view it and share it far and wide if you resonate with its message, as I do: