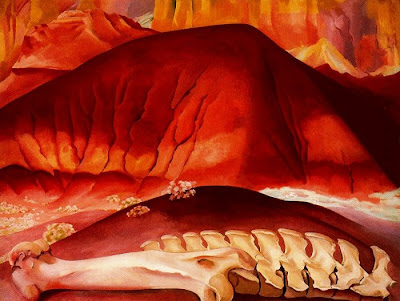 Unfortunately, although the economic and environmental challenges ahead of us are almost unthinkable, most people can't even come to grips with the reality of our present circumstances. Coal miners in West Virginia and Shanxi are dying, in unsafe mines that should be shutdown because the fossil fuel they produce are killing all of us, including the miners' grieving loved ones, by poisoning the air and destroying the climate; meanwhile, the US body politic is so out of whack that to facilitate passage of climate crisis legislation intended to deal with the destructive impact of fossil fuel, President Obama feels compelled to promise more fossil fuel production.

Consider this analysis from Think Progress:

A strong cap on carbon would significantly cut the flow of petrodollars to Iran’s hostile regime ... Iran, “which holds the world’s second-biggest oil and gas reserves and supplies about 4.5 percent of the world’s oil production,” uses its oil power “as a strategic asset.” ... ThinkProgress has found that a carbon cap that reduces global warming pollution by 80 percent by 2050 would mean Iran would lose approximately $1.8 trillion worth of oil revenues over the next forty years — over $100 million a day ... Think Progress, 4-9-10

Why pursue failed national security strategies, i.e., protecting the oiligarchies and fomentng war, when we could change the geopolitical realities as a by-product of saving our species and our planet?

The climate crisis is, as James Hansen says, "the predominant moral issue of the 21st century." Unfortunately, instead of engaging in the profound debate on what to do and how fast to move, the US mainstream news media is still pandering to the false meme of credible doubts about the validity of the scientific consensus, the US Chamber of Commerce is still stoking its furnace of disinformation, and the political establishment is still looking for ways to put off decisions that should have been made a decade ago.

Instead of indulging the fantasies and deceits of the denialists, we should be debating whether to go with the esotericism of cap and trade or the cold shower of carbon tax.

Since you won't hear it on Meat the Press or Fork the Nation or Weak in Revision, here is a virtual debate between James Hansen, who headed NASA Goddard Institute for Space Studies, and Nobel-Prize winner Paul Krugman, followed by some insightful commentary from Alex Steffen of WorldChanging (a wonderful resource):

President Obama, finally, took a get-involved get-tough approach to negotiations on health care legislation and the arms control treaty with Russia -- with success. Could this be the turn-around for what might still be a great presidency?
The predominant moral issue of the 21st century, almost surely, will be climate change, comparable to Nazism faced by Churchill in the 20th century and slavery faced by Lincoln in the 19th century. Our fossil fuel addiction, if unabated, threatens our children and grandchildren, and most species on the planet ...
The fundamental requirement for solving our fossil fuel addiction and moving to a clean energy future is a rising price on carbon emissions. Otherwise, if we refuse to make fossil fuels pay for their damage to human health, the environment, and our children's future, fossil fuels will remain the cheapest energy and we will squeeze every drop from tar sands, oil shale, pristine lands, and offshore areas.
An essential corollary to the rising carbon price is 100 percent redistribution of collected fees to the public -- otherwise the public will never allow the fee to be high enough to affect lifestyles and energy choices ...
The fee-and-green-check approach is transparent, fair and effective. Congressman John Larson defined an appropriate rising fee. $15 per ton of carbon dioxide the first year and $10 more per ton each year. Economic modeling shows that carbon emissions would decline 30 percent by 2020. The annual dividend then would be $2000-3000 per legal adult resident, $6000-9000 per family with two or more children ... James Hansen, Huffington Post, 4-5-10

What about the case for an emissions tax rather than cap and trade? There’s no question that a straightforward tax would have many advantages over legislation like Waxman-Markey, which is full of exceptions and special situations. But that’s not really a useful comparison: of course an idealized emissions tax looks better than a cap-and-trade system that has already passed the House with all its attendant compromises. The question is whether the emissions tax that could actually be put in place is better than cap and trade. There is no reason to believe that it would be — indeed, there is no reason to believe that a broad-based emissions tax would make it through Congress.
To be fair, Hansen has made an interesting moral argument against cap and trade, one that’s much more sophisticated than the old view that it’s wrong to let polluters buy the right to pollute. What Hansen draws attention to is the fact that in a cap-and-trade world, acts of individual virtue do not contribute to social goals. If you choose to drive a hybrid car or buy a house with a small carbon footprint, all you are doing is freeing up emissions permits for someone else, which means that you have done nothing to reduce the threat of climate change. He has a point. But altruism cannot effectively deal with climate change. Any serious solution must rely mainly on creating a system that gives everyone a self-interested reason to produce fewer emissions ... Paul Krugman, Building a Green Economy, New York Times, 4-7-10
Georgia O'Keefe, Stump in the Red Hills (1940) 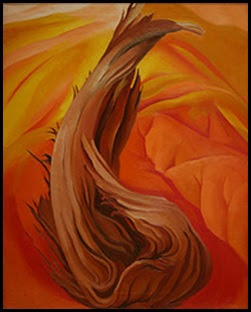 In conclusion, Alex Steffen leads beyond Kurgman's cautious steps and takes the discussion farther out to where the ice is thinner, and so it is eassier to see just how deep the abyss below us really is --

Where Krugman disappoints is on two counts: the cost of inaction and the benefits of action ... Here's the reality with which our economy is colliding:
* Climate change is already unfolding much more quickly than we thought it would.
* The models upon which we're basing our discussions today (largely the IPCC models) are known to be seriously out-of-date and overly conservative in predicting the speed and consequences of climate change.
* Steady losses that are climate-related (such as losses of ecosystem services) are already exacting a serious economic cost, while droughts, heat waves, flooding and freak storms grow steadily more common and expensive.
* Many of the negative effects of climate change are expected to be catastrophic cascading failures -- a phenomenon baseline economic models seem unable to incorporate. Large, permanent collapses are entirely within the scope of reasonable expectation and yet are not generally accounted for in economic studies ...
* Geopolitical stability is likely to unravel in a climate crisis world. Wars, famines, epidemics, mass migrations, economically devastating local disasters -- all are expected to multiply, bringing all sorts of disruptions to trade, public health costs, and irrational destruction of ecological assets (people fighting over a oasis in a deserted Sahel are not always the most rational economic actors) ...
Perhaps, as I've been told, economists would have to break long-established traditions and count more externalities in order for their models to reflect that reality. Maybe it's time they got started. Alex Steffen, Does Paul Krugman Vastly Understate the Economic Argument for Climate Action?, World Changing, 4-8-10
Georgia O'Keefe, Red Hills, Lake George (1927) 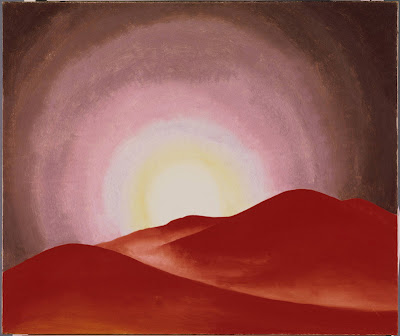