Beseiged by an UnWell UnRegulated Militia; Homage to the Fallen, & An Exhortation to Love 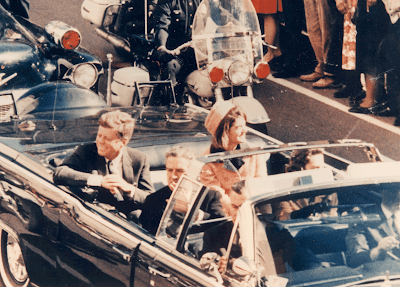 "The gross national product does not allow for the health of our children, the quality of their education or the joy of their play. It does not include the beauty of our poetry or the strength of our marriages, the intelligence of our public debate or the integrity of our public officials. It measures neither our wit nor our courage, neither our wisdom nor our learning, neither our compassion nor our devotion to our country; it measures everything, in short, except that which makes life worthwhile. And it can tell us everything about America except why we are proud that we are Americans." Robert F. Kennedy, 1968

Beseiged by an UnWell UnRegulated Militia; Homage to the Fallen & an Exhortation to Love

New research indicates the impact of rising CO2 levels in the Earth's atmosphere will cause unstoppable effects to the climate for at least the next 1000 years, causing researchers to estimate a collapse of the West Antarctic ice sheet by the year 3000, and an eventual rise in the global sea level of at least four metres. Climate Change To Continue To Year 3000 In Best Case Scenarios, Terra Daily, 1-10-11

The Obama administration's $78 billion cut to US defense spending is a mere "pin-prick" to a behemoth military-industrial complex that must drastically shrink for the good of the republic, a former Reagan administration budget director recently told Raw Story ... Short of that, he suggested, the United States has "reached the point of no return" with its artificial creation of wealth, and will eventually face a sharp economic decline. Exclusive: America has ‘reached the point of no return,’ Reagan budget director warns, Raw Story, 1-10-11

Food riots, geopolitical tensions, global inflation and increasing hunger among the planet's poorest people are the likely effects of a new surge in world food prices, which have hit an all-time high according to the United Nations. The Coming Hunger: Record Food Prices Put World 'in Danger', Says UN, Independent/UK, 1-6-11

Of course, even if a mentally disturbed individual who went from posing in a g-string with his Glock to perpetrating a terrorist atrocity at a Tuscon Safeway had not held up a shattered mirror to our loathesome self-image, we would have chosen to ignore these three stories of profound planetary significance. It is just so much easier to live in denial, until it is inescapable; and then well, just smash the mirror.

Yes, he was psychologically disturbed, yes, he acted alone. But he might as well have received a phone call suggesting that he play a game of solitaire. Because you don't need a complex criminal conspiracy when you have a political culture so brutalized, so full of dog whistles, that it does your dirty work for you.

Rep. Gabrielle Giffords (D-AZ) was shot in the head at a public event in Tucson; six others were murdered, including a federal judge and a little girl interested in civics, who was born on 9/11/01. And this atrocity occurred just days after what amount to a right-wing cult took possession of the committee chairmanships in the U.S. House of Representatives.

There is no moral equivalency between the Zombie Right and the rest of us, ranging as we do from the center to the left; none whatsoever. It is not us versus them. It is civil society versus madness. That is why it must be understood that the struggle in the US body politic is no longer between right and left it is between reason and madness. That's why Jon Stewart and Barack Obama are wrong with their false moral equivalency; it is not about us vs. them. We have a House committee chairman who quotes Genesis as his proof that climate change is not a threat to life on this planet. That's not us vs. them that's reason version madness.

Armed with Wal-Mart munitions, awash in surround sound toxic talk, and underwritten with a black check from Citizens United, the corporatist overlords and their crypto-fascist foot soldiers demand nothing less than total victory: the bankrupting of the U.S. federal government in all ways but military, the neutering of all regulatory agencies (e.g., EPA, FDA, etc.), the perversion of human rights into those of an imaginary corporate personhood (first and foremost, the equating of "filthy lucre" with free speech), the privatization of the commons (e.g., infrastructure and water), and the humbling of the middle class.

Land of the free? Home of the brave? We are by besieged by an unwell-unregulated militia.

During an interview on MSNBC's Hardball, Media Matters President and CEO David Brock accused Glenn Beck of being "responsible for three thwarted assassination attempts this year." Indeed, in each of the three examples Brock cited -- Gregory Giusti, Charles Wilson, and Byron Williams -- the incendiary and often violent rhetoric spewed by the Fox News host and elsewhere on the network was said to be a motivating factor, if not the inspiring factor, in the men's actions. Media Matters, 1-13-10

Of all the commentary offered in the aftermath of the Tuscon terrorist attack, the most poignant was also perhaps the most insightful:

On November 22, 1963, Mummy picked me up early from Sidwell Friends School in Washington, D.C. Driving home to Hickory Hill in northern Virginia, I noticed that all the District flags were at half staff. Mummy told us that a bad man had shot Uncle Jack and that he was in heaven. ... Neither Beck, Hannity nor Savage nor the hate merchants at Fox News and talk radio can claim to have invented their genre. Toxic right-wing vitriol so dominated the public airwaves from the McCarthy era until 1963 that President Kennedy, that year, launched a citizen's campaign to enforce the Fairness Doctrine, which required accuracy and balance in the broadcast media. Students, civic and religious groups filed more than 500 complaints against right-wing extremists and hate-mongering commentators before the FCC.
The Dallas, Texas, airwaves were particularly radioactive; preachers and political leaders and local businessmen spewed extremist vitriol on the city's radio and TV stations, inflaming the passions of the city's legions of unhinged fanatics. There was something about the city -- a rage or craziness, that, whether sensible or not, seemed to have set the stage for Jack's murder. The Voice of America, half an hour after the assassination, described Dallas as "the center of extreme right wing." The Texas town was such a seething cauldron of right-wing depravity that historian William Manchester portrayed it as recalling the final days of the Weimar Republic. Robert F. Kennedy, Jr., Tucson: Time for Another Examination of Conscience, Huffington Post, 1-11-11

The Other Responsible Party?

Where does that leave us all here and now?

There are two groups responsible for last Saturday’s tragedy in Tucson Arizona.
One group is made up of right-wing Republicans, Tea Party fanatics, and extremist conservative talk show personalities. These people have, for too long now, been consciously creating an atmosphere in which illegal acts of intimidation and violence are mistaken for patriotism. ... However, the situation would never have gotten to its present explosive level without the complementary behavior of the second group. And that is the country’s center/liberal establishment, including the Democratic Party leadership, all of whom have failed to treat the right-wing threat seriously. It does not matter if members of this group simply misjudged the situation or they had the mistaken notion that to confront it would only make things worse. In either case they were wrong. Whether we consider Al Gore’s response to the stolen presidential election of 2000 or Barack Obama’s consistent refusal to prosecute the criminal acts of the Bush-era extremists, these center/liberal leaders have behaved irresponsibly in the face of a growing and recognizably dangerous situation. They do the country no favor by confronting a violent right with passivity or sorrowful words. Lawrence Davidson, Is Obama Right to Quiet Debate? Consortium News, 1-13-11

On Wednesday, POTUS delivered a powerful speech in Tuscon, at the memorial for the fallen. It was an admirable performance by a smart and decent man in an impossible position.

But the true nature of danger remains unacknowledged and unchallenged by Beltwayistan or Infotainmentstan; in large part because the true nature of the danger has come to permeate the political establishment and the mainstream media. (See F.A.I.R.'s remarkable analysis: Violent Media Rhetoric: Beyond Tucson, Common Dreams, 1-14-11)

So where does that leave us all here and now?

One recent morning, I stood in the damp air, grateful for the pre-dawn darkness, grateful for the murky lavender of the street lamp glow reflected in the low-hanging clouds, grateful the motionless silhouettes of these trees that have witnessed so much in deep silence.

Each tear is a rain drop, each rain drop is a tear. Each smile is a sunrise, each sunrise is a sunset somewhere else. Do not cling to fear, & it will dissolve. Do not cling to joy, & it will return. Courage is like the sky; once you have found it, you cannot exhaust it. Compassion is like the sea; once you have found it, it will undulate ceaselessly. Embrace all of life, it needs your touch. Martin Luther King Day is upon us.