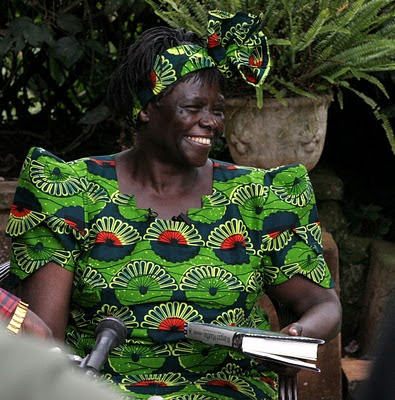 “Every person who has ever achieved anything has been knocked down many times. But all of them picked themselves up and kept going, and that is what I have always tried to do.” -- Wangari Maathai, Unbowed: A Memoir

In degrading the environment, therefore, we degrade ourselves

I don't do obituaries. I don't read them, I don't write them, I don't post them. But the news that Nobel Peace Prize winner Wangari Maathai had shucked the mortal coil hit me harder than any other death in a very long time; and I have not been able to move beyond it.

Since there is no U.S. mainstream news source worthy of telling her story, here is a brief excerpt from the BBC obit:

The Green Belt Movement, which she founded in 1977, has planted an estimated 45 million trees around Kenya. The straightforward environmental benefits of that would have been important enough on their own in a country whose population has grown more than 10-fold over the last century, creating huge pressure on land and water. But what made the movement more remarkable was that it was also conceived as a source of employment in rural areas, and a way to give new skills to women who regularly came second to men in terms of power, education, nutrition and much else. Wangari Maathai: Death of a visionary, BBC, 9-26-11

Of course, Wangari Maathai's powerful presence will live on, rising from the roots of the countless trees she planted, as well as countless more she inspired others to plant. The way to honor her memory is strive to save this planet from the impact of human ignorance, epitomized as it is by climate change denialism, the Keystone XL tar sands pipeline, and other abominations.

Likewise, you cannot empower people unless you protect the environment. Human rights and environmental security are interdependent. Maathai understood this. So does Gore. And they were the first and second to win the Nobel Peace Prize for their efforts to further environmental justice and security. The Climate Crisis, and the Sustainability Meltdown with which it is interwoven, are the greatest challenges of our age, they are both our greatest threats and our greatest opportunities.

In degrading the environment, therefore, we degrade ourselves. The reverse is also true. In the process of helping the earth to heal, we help ourselves. If we see the earth bleeding from the loss of topsoil, biodiversity, or drought and desertification, and if we help reclaim or save what is lost—for instance, through regeneration of degraded forests—the planet will help us in our self-healing and indeed survival. Wangari Maathai, Spiritual Environmentalism: Healing Ourselves by Replenishing the Earth, Yes! Magazine, 9-26-11

As One People, United, We Acknowledge the Reality

For several days and nights, I confess, it is as if I have been following Wangari Maathai's shroud step by step through the Bardo, as she planted tree after tree, down a long row into infinity ...

Meanwhile, in the world of light, sound and movement, the struggle for the victory of love and awareness raged on.

“I am so blessed to be here,” West said. “You got me spiritually break-dancing on the way here. Because when you bring folk together, of all colors, of all cultures, of all genders, of all sexual orientations the elite will tremble in their boots. And we will send a message that this is the U.S. Autumn, responding to the Arab Spring.” Cornel West at ‘Occupy Wall Street’ protest: The elite will tremble, Raw Story, 9-27-11

Witnesses said they saw three stunned women collapse on the ground screaming after they were sprayed in the face ... "I saw a girl get slammed on the ground. I turned around and started screaming," said Chelsea Elliott, 25, from Greenpoint, Brooklyn, who said she was sprayed. "I turned around and a cop was coming ... we were on the sidewalk and we weren't doing anything illegal." Wall Street protesters cuffed, pepper-sprayed during 'inequality' march, N.Y. Daily News, 9-25-11

A new generation has gone to the scene of the crimes committed against our future. The time has come for all people of good will to give our full-throated backing to the young people of the Occupy Wall Street movement. Van Jones and Max Berger, Wall Street Protests: Which Side Are You On? Rebuild the Dream, 10-1-11'

Labor unions and liberal activist groups plan to throw their weight behind the “Occupy Wall Street” protest in New York City that has now lasted 13 straight days ... Among unions, the United Federation of Teachers, 32BJ SEIU, 1199 SEIU, Workers United and Transport Workers Union (TWU) Local 100 have said they will participate in the protest next Wednesday. The Working Families Party, MoveOn.org, Make the Road New York, the Coalition for the Homeless, the Alliance for Quality Education, Community Voices Heard, United New York and Strong Economy For All also plan to support the demonstration.
Unions and liberal groups to join ‘Occupy Wall Street’ protest, Raw Story, 9-29-11

A few hours prior to my posting this Words of Power, "New York City General Assembly occupying Wall Street in Liberty Square" issued its first statement. I include it here, in its entirety, in the hope that it not be lost in time. May these seedlings take root, and may a great forest break through the walls and floors of that tomb. The struggles for environmental justice and economic justice are utterly interdependent. You cannot achieve one without the other; and there will be no meaningful peace without achieving both.

Declaration of the Occupation of New York City
As we gather together in solidarity to express a feeling of mass injustice, we must not lose sight of what brought us together. We write so that all people who feel wronged by the corporate forces of the world can know that we are your allies.
As one people, united, we acknowledge the reality: that the future of the human race requires the cooperation of its members; that our system must protect our rights, and upon corruption of that system, it is up to the individuals to protect their own rights, and those of their neighbors; that a democratic government derives its just power from the people, but corporations do not seek consent to extract wealth from the people and the Earth; and that no true democracy is attainable when the process is determined by economic power. We come to you at a time when corporations, which place profit over people, self-interest over justice, and oppression over equality, run our governments. We have peaceably assembled here, as is our right, to let these facts be known.
They have taken our houses through an illegal foreclosure process, despite not having the original mortgage.
They have taken bailouts from taxpayers with impunity, and continue to give Executives exorbitant bonuses.
They have perpetuated inequality and discrimination in the workplace based on age, the color of one’s skin, sex, gender identity and sexual orientation.
They have poisoned the food supply through negligence, and undermined the farming system through monopolization.
They have profited off of the torture, confinement, and cruel treatment of countless nonhuman animals, and actively hide these practices.
They have continuously sought to strip employees of the right to negotiate for better pay and safer working conditions.
They have held students hostage with tens of thousands of dollars of debt on education, which is itself a human right.
They have consistently outsourced labor and used that outsourcing as leverage to cut workers’ healthcare and pay.
They have influenced the courts to achieve the same rights as people, with none of the culpability or responsibility.
They have spent millions of dollars on legal teams that look for ways to get them out of contracts in regards to health insurance.
They have sold our privacy as a commodity.
They have used the military and police force to prevent freedom of the press.
They have deliberately declined to recall faulty products endangering lives in pursuit of profit.
They determine economic policy, despite the catastrophic failures their policies have produced and continue to produce.
They have donated large sums of money to politicians supposed to be regulating them.
They continue to block alternate forms of energy to keep us dependent on oil.
They continue to block generic forms of medicine that could save people’s lives in order to protect investments that have already turned a substantive profit.
They have purposely covered up oil spills, accidents, faulty bookkeeping, and inactive ingredients in pursuit of profit.
They purposefully keep people misinformed and fearful through their control of the media.
They have accepted private contracts to murder prisoners even when presented with serious doubts about their guilt.
They have perpetuated colonialism at home and abroad.
They have participated in the torture and murder of innocent civilians overseas.
They continue to create weapons of mass destruction in order to receive government contracts.*
To the people of the world,
We, the New York City General Assembly occupying Wall Street in Liberty Square, urge you to assert your power.
Exercise your right to peaceably assemble; occupy public space; create a process to address the problems we face, and generate solutions accessible to everyone.
To all communities that take action and form groups in the spirit of direct democracy, we offer support, documentation, and all of the resources at our disposal.
Join us and make your voices heard!
*These grievances are not all-inclusive. First official statement from Occupy Wall Street, Daily Kos, 10-1-11
Cornel West on Occupy Wall Street: It’s the Makings of a U.S. Autumn Responding to the Arab Spring

Do you know why 350 is the most important number in your life and the lives of everyone you love? Go to 350.org for the answer.
Richard Power's seventh book, Between Shadow and Night: The Singularity in Anticipation of Itself, is now available. Here are links to purchase it from Amazon.com, or from CreateSpace.
You can also visit Richard Power author's page at Amazon.com.
Posted by Richard Power at 10:25 PM