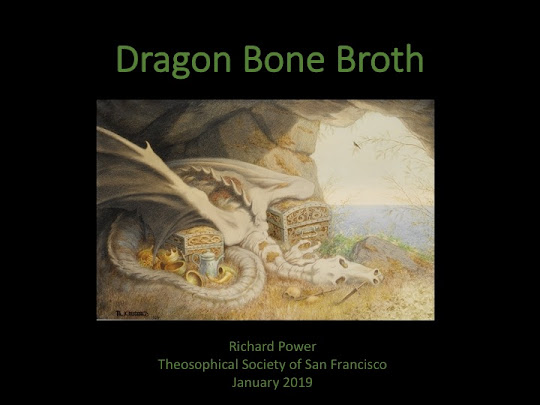 Last year, I published “I, the Dragon: Chronicles of An Epic Life Among the Humans.” One of the threads that runs throughout the narrative is a shamanic tale, a ‘tale of Seven Beasts,’ i.e., the animal guides that brought my vital medicine at crucial moments: first was the Lizard, then the Wolf, then the Cave Bear, then the Raven, then the Vulture, then the Dragon and yes a seventh beast, which is a mystery, a shape-shifter.

The title of this talk, “Dragon Bone Broth,” concerns the sixth of the seven beasts.
There is a deep magic moving among us. That's why here at the beginning of a new year, the Tibetan Year of the Female Earth Boar," in this time of danger, in this time of great peril, in this time of chaos, I felt it would be beneficial to throw some dragon bones into the cauldron, stir in some powerful herbs, and offer you this medicine broth, tozencourage and empower you.

We are in danger. Our nation is in great peril. Environmentally, economically, politically. All of humanity is in danger. Countless species face extinction. Our own species dancing around extinction-level events of its own making. The worst and sickest among seem to act out with impunity. And whether you choose to ignore it or not, this is all hitting you hard.

“The world’s leading climate scientists have warned there is only a dozen years for global warming to be kept to a maximum of 1.5C, beyond which even half a degree will significantly worsen the risks of drought, floods, extreme heat and poverty for hundreds of millions of people.”– Jonathan Watts, “We have 12 years to limit climate change catastrophe,” Guardian, 10/8/18

“Climate change could be kept in check if a phaseout of all fossil fuel infrastructure were to begin immediately, according to research. It shows that meeting the internationally agreed aspiration of keeping global warming to less than 1.5C above pre-industrial levels is still possible ….” – Damian Carrington, “Immediate fossil fuel phaseout could arrest climate change,” Guardian, 1/16/19

One of the overarching themes in both Wyrds of Power and I, the Dragon is the reframing of altruism and sustainability as spiritual (and existential) imperatives.


Lately, I have been having a new experience on those long lines at Trader Joe’s and Whole Foods. I have been detecting something in some of those Millennials (now in their thirties) and Generation Z (now in their twenties) ahead of me in line, something in their aura, in their vibe, in their countenance. It is a state I recognize, but it’s difficult to put into words. It’s not anger, but there is anger in it, righteous anger, it’s not shock, but it has the air of having emerged from shock, it’s a state beyond “WTF?!?!?” These young people I have detected are leaning forward, “stoic” could be a word, “spartan” could be a word. They are calm, poised, speechless, but dealing. There is full realization of how utterly upside down, twisted, insane it has all become, and a sense of astonishment of how this all could have been allowed to happen. It’s all there in the forward-leaning grimace: the climate crisis, the political crisis, a system perverted by the absurd premises that money is speech and corporations are people, people debating whether or not 2+2 = “4” or “5” as if there was an equivalency between the arguments, the open pandering to racism, misogyny and homophobia, student loan debt, the cost of healthcare, the cost of housing, all of it, crimes against nature, crimes against humanity, all of it … As they reach for their credit card, in their psyche/soma I see this, I hear this: “WTF?!?!? I don’t how I am going to get through this but I am going to get through this. I will not lose my humanity. I will deal. I will cope. I will do what I have to do to stay ahead of this tsunami of reckoning. But I will not lose my humanity.” That’s what I’m seeing now. It’s the countenance of a warrior, the atmosphere of a warrior. Not someone who chose the path of the warrior, but someone who life compelled to take up the path of the warrior in order to simply survive and remain somehow whole. Now I don’t see this in every Millennial or Gen Zer that I see, but in a significant subset ... And this “WTF?!?!” state is further evidence of the Great Shift already underway …

I want you to know I am hopeful. For our future.

This talk marks the end of the year-long roll-out of “I, the Dragon.”

Although I will keep the Go Fund Me campaign open for a while longer, both “I, the Dragon” and “Wyrds of Power” are now available via Amazon.com, so the campaign is over.

There is a lot I could say about this year-long effort. but I’m not going to.

At least not here and now.

What I will say about it here and now is that I am profoundly grateful to those beings who actually did participate in this book’s GoFundMe campaign and especially to those beings who read it, felt a deep resonance with it and were moved to share powerful testimonials.

This talk is composed of five segments.

A preview of this talk was given at the Theosophical Society of San Francisco on 1/18/19, the full version was delivered a month later via Facebook Live on 2/17/19.

Dragon Bone Broth: In the Palace of Mirrors

Dragon Bone Broth: The Problem of Men (And Some Radical Remedies

Dragon Bone Broth: On the Nature of Magic, Magical Beings and the Structure of the Magical World

Posted by Richard Power at 3:45 PM