Dragon Bone Broth: The Problem of Men (And Some Radical Remedies) 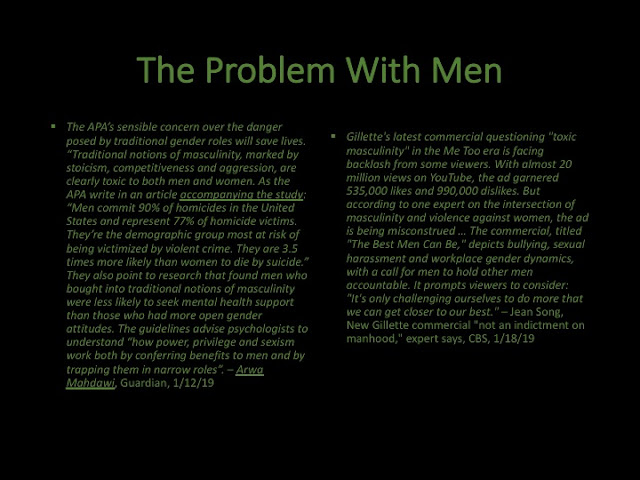 The Problem with Men (And Some Radical Remedies)

Have you seen the Gillette commercial that was debuted recently?

It reflects an important shift in our culture.
Within a few days of that commercial being aired for the first time, the American Psychological Association released a report that reflects the same shift.
And what is this important cultural shift? We are turning at last to deal with the problem with men, i.e., the problem of toxic “masculinity.”

I place “masculinity" inside of quotes because it is my contention that we don’t even really know what a man is. I have written and spoken at length on the Ascendancy of the Feminine in Psyche; indeed, it is one of the four or five overarching themes in both “Wyrds of Power” and “I, the Dragon.” 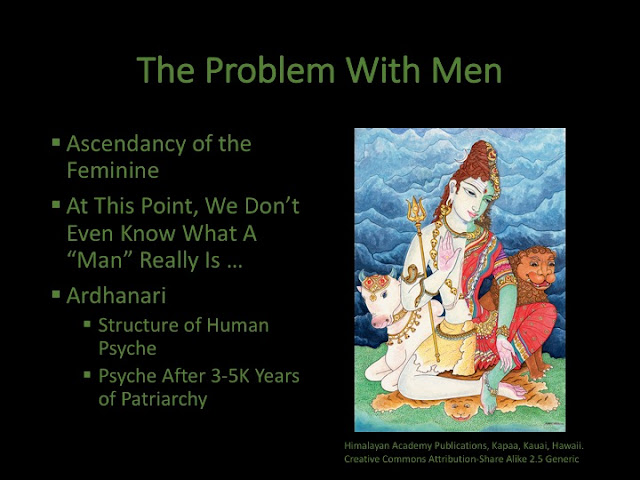 But in the context of this talk, I want to spend a few moments exploring the underside of the Feminine Ascendancy, i.e., this problem with men.

From my perspective, an understanding of Ardhanari is essential to this exploration.
Now just work with me, accepting this premise that Ardhanari should be the avatar of the 21st Century, because it/they/she/he represents the human psyche, in its primal condition, with both of its hemispheres vibrant and alive. I want you to close your eyes and move with me into the creative imagination. Begin by holding the image of Ardhanari, the half Shiva / half Shakti avatar, in your mind’s eye. Next, spin it, whirl it, faster and faster, until the image begins dissolve, disassemble it, whirling, whirling, until it liquifies and all of the colors transmute into a bright blue and a bright pink, a swirling cyclone of liquid drops of blue and pink, and then allow the whirling to slow gradually, and taking a new form, you could see it as a brain with two hemispheres, you could see it as a heart with two “halves,” but better to imagine them as hemispheres, you could see it as a cauldron with two hemispheres, if you can draw in your creative imagination a structure that is brain, heart and cauldron, the contours of each of the three forms showing, perhaps the brain, within the heart, and the heart emerging from the cauldron, but all fused somehow, all touching, not separate, connected with each other, or somehow superimposed upon each other. This is more representative of what we really are than a brain alone, or a heart alone, or a brain and a heart alone together, the cauldron, the belly must be included, and all three must be interpenetrating … the only colors you are working with are bright blue and bright pink, the outline of this heart-brain-belly superstructure is not drawn with solid lines, it is drawn with broken lines, dashes, and these dashes alternately bright blue or bright pink all throughout the outline of the superstructure, so it is all dynamic and it is all both pink and blue … not static, not divided, flowing like Yin and Yang, but not black and white like Yin and Yang, because we want to free ourselves and these powerful symbols from that Table of Erroneous Correspondences I mentioned earlier … 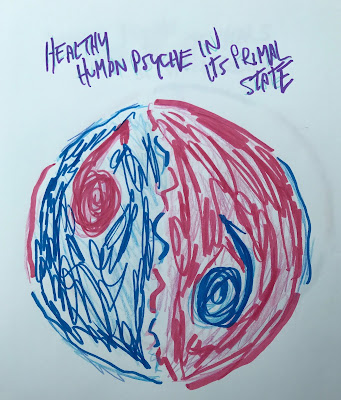 Now imagine these two hemispheres within the brain-heart-belly superstructure: one hemisphere is pink, the other hemisphere is blue, but just as the outline of the superstructure is made with alternating blue and pink dashes instead of solid lines, likewise the edge at which the hemispheres meet, along the center from top to bottom, it isn’t a solid line, the two hemispheres sort of bleed over into each other, the line is blurred … these are Female and Male hemispheres of the human psyche … and just as there is a swirl of Yin (black) inside the Yang (white) and a swirl of Yang (white) inside the Yin (black), there is a pink (female) spiral inside of the blue (blue) hemisphere, these are more like spirals than swirls, they are shaped differently than the little drops of Yin and Yang each inside the hemisphere of the other, and also unlike the Yin-Yang symbol, these pink and blue spirals, each inside of the hemisphere of the other, they are not fixed at the center of the opposite hemisphere as they are in the Yin-Yang symbol, in this vision, they are dynamic, they move, like satellite images of hurricanes moving over the surface of the sea, nor are they in tandem, they are not aligned with each other, they move independently and ceaselessly, the pink storm could be up way high in the blue hemisphere, while the pink storm could be at the center, next moment the pink one at the center could have moved to the outer edge of the blue hemisphere, while the blue storm moves all the way to the bottom of the pink hemisphere … this is a depiction, a vision of the primal human psyche, healthy and whole … all issues of gender, sexuality, gender identity, gender politics, all of that is way down stream from this vision of the primal human psyche, this is the truth of our psyche, whatever your gender identity, whatever your physical body parts, whatever, whatever, all of that involves other factors, other dimensions: karmas, chains of dependent arising, biology, psychology, it’s all downstream from this primal reality … 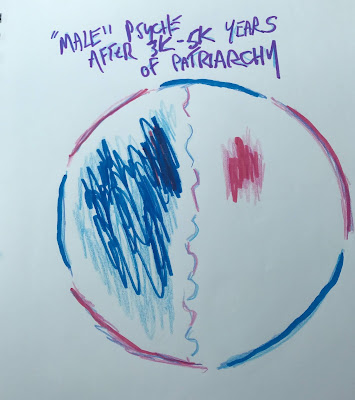 Now imagine an individual human psyche in a male physical body after 3,000 to 5,000 years of Patriarchy: the psyche’s female hemisphere shrunken to 0-15 % of its primal mass, the rest of that space that hemisphere would fill up is a dead zone, blank, no blue, no color, and there is no blue (masculine) cyclone moving in that hemisphere, there is not enough mass of pink to sustain it, and blue (male) hemisphere itself is shrunken, it has receded at the edges, it has lost maybe 15-20% of its own mass, there are also dead zones within the hemisphere itself, and of course, there no pink (female) spiral in the blue hemisphere …

So this is a graphic representation of the problem with men. It provides context for my statement that at this point in the human saga, we don’t realty even know what a man is, or was meant to be, because for 3,000 to 5,000 years we have been denied half of our own psyches. Of course, women, human psyches inhabiting female physical body, have been physically, psychologically, spiritually, economically oppressed for those same 3,000 to 5,000 years, across most of the planet, almost all of the planet, in both civilizations and in many indigenous cultures as well. (In the East, the iconography may be balanced, and therefore healthy in that way, but it doesn’t translate to the social order, in the social order the patriarchy, in its violence and perversion, rules.)

Now, because in this exercise we are focused on that problem, I’m not going to go on here to draw the human psyche in a female physical body, that’s a topic for another time, and also I feel it would be better, truer, to work with a woman on that depiction … 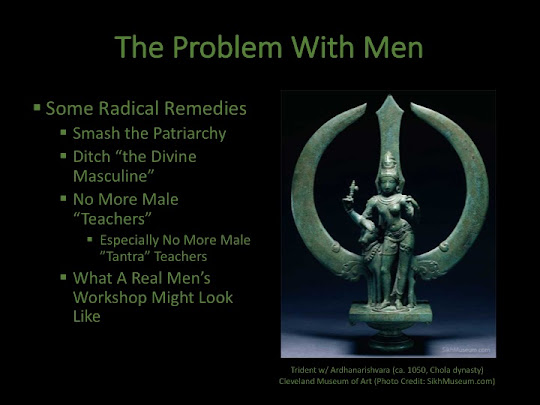 I propose some radical remedies for this problem with men.

Smash the Patriarchy: The first of these remedies is one that is a meme moving among us all now and I embrace it and I hold it up to you as of profound importance and immediate necessity: SMASH THE PATRIARCHY in all realms of human life, in government, in media, business, in science, in the arts, in academia, in medicine, all of it … across the board … every Charlie Rose that falls is replaced with a Christiane Amanpour … just recently the female head of the CIA just appointed women to lead each of the four directorates. The CIA if you don’t know this, is organized into four groupings, directorates: Clandestine Services, Science and Technology, Intelligence and Support. For the first time in the Agency’’s history each of these entities is being directed by a woman. Now I am not talking about ideology here, I am talking about anthropology. There is a fundamental difference anthropologically, things will be handled differently. There are profound potentially long-lasting changes that in systems, policies, cultures, etc. that can flow from this if it is allowed to continue long enough …

Ditch the “Divine Masculine”: Perhaps it’s a sensitive subject for some of you, but I am going to suggest to you that if we don’t really know what a man is than I don’t really know how we can project wildly about what the “Divine Masculine” is, at best it would be a projection based on the warped, ill, broken psyche we depicted in our vision of the human psyche in a male human after 3,000 to 5,000 of Patriarchy. So that’s can be right. Most of the time when I heard the term “Divine Masculine” used it’s being used in a self-serving way or in a romantically delusional way, as a projection of the qualities of some ideal lover … So let’s just ditch it, throw it over board, and revisit the notion later, much later … for how long? I don’t know. A hundred years? A thousand years?

No More Male Spiritual Teachers: OK, I know this is going to press some buttons, but seriously. Maybe for 100 years, maybe for 1,000 years. OK, I know it’s radical, but what if we start here – No More Male “Tantra Teachers” and especially “No More Male Neo-Tantra Teachers.” For a century, for a millennium. That might really help everybody.

What A ‘Real Men’s Workshop’ Would Look Like: Instead of let’s say twenty men going off into the forest together to sort out stuff, when as we have seen they do not possess that half of the psyche they would need to sort it out, instead of that futile model, I suggest you take each one of those twenty men and send them off into the forest with twenty women, each man alone with twenty women, isolated, in the forest for two weeks, or a month … sorting through all that arises from the problem with men, that would be a “Men’s Workshop” that might actually help a man begin to resuscitate some of those dead zones patches in the pink hemisphere of his psyche …

Dragon Bone Broth: The Problem with Men (Video) via Spoken Words of Power