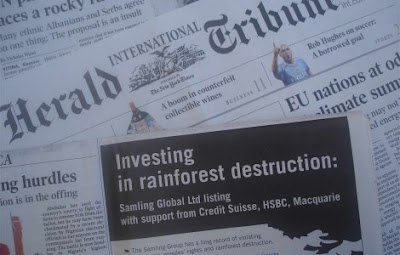 NOTE: I am closely monitoring the fast-breaking events in Beltwayistan, concerning the pursuit of accountability in both the betrayal of US secret agent Valerie Plame and the purging of US DoJ Attorneys. I will not allow anything vital to get lost in the misdirection of the mainstream news media. I will post on either or both scandals -- when and if it is necessary. Think Progress and Talking Points Memo are doing a fantastic job of real-time reporting and analysis. We will soon see how much courage there is under the Capitol Dome. I trust the Chairmen involved, Sen. Patrick Leahy (D-VT), and Reps. John Conyers (D-MI) and Henry Waxman (D-CA), but much damage has been done to the vital organs of the body politic.
Meanwhile ...

I have written to you before about the trees, in particular the Fallen Tree, the World Tree, the White Tree and the Giant Sequoias. Now I write you once again, with great urgency.

There is no sustainability issue more profound or more direct than that of deforestation; it ranks with the other first tier environmental security problems – including the scarcity of fresh water, overpopulation, the ravishing and fouling of the oceans, our suicidal dependence on fossil fuels, and the global warming crisis itself. Indeed, these great issues interpenetrate and aggravate each other.

Today, I will tell you a bit about deforestation.

The UN Food and Agriculture Organization (FAO) reports that deforestation in Africa, Latin America and parts of Asia is advancing at a disturbing pace:

"Countries that are facing the most serious challenges in achieving sustainable forest management are those with the highest rates of poverty and civil conflict," said [FAO’s David] Harcharik . . . Africa, Latin America and the Caribbean are currently the regions with the highest losses. . . .Africa, which accounts for about 16 per cent of the world's forests, lost more than 9 per cent of its trees between 1990 and 2005, the FAO said. In Latin America and the Caribbean, home to nearly half of the world's forests, 0.5 per cent of the forests were lost every year between 2000 and 2005 - up from an annual net rate of 0.46 per cent in the 1990s. . . . Ten countries account for 80 per cent of the world's primary forests, of which Indonesia, Mexico, Papua New Guinea and Brazil saw the highest losses in primary forest in the five years to 2005. Jerome Taylor, Destruction of Forests in Developing World 'Out of Control', Independent/UK. 3-14-07

In particular, I draw your attention to the activities of Samling Global:

The Samling Group has a long record of violating indigenous peoples’ rights and rainforest destruction. It is now logging the last remaining primary rainforests in Sarawak in Malaysia, in conflict with indigenous peoples there. Samling Group and its related companies have illegally logged forests in Cambodia and Papua New Guinea. It has been found non-compliant with Forest Stewardship Council (FSC) standards in Guyana.
The undersigned [thirty-seven NGOs from eighteen countries] call on investors to shun this company, and the sponsoring banks of Credit Suisse, HSBC and Macquarie to cease providing services to Samling. HSBC appears in breach of its own forest sector guidelines, Credit Suisse appears in breach of its Sustainability Policy (available on the Credit Suisse website). Macquarie does not appear to have a publicly available forests policy. . . .
Bruno Manser Fonds, Association for the Peoples of the Rainforest

The decimation of the primeval forests degrades our common humanity.

What is done in our name is done by us; and what we do to these forests we do to ourselves.