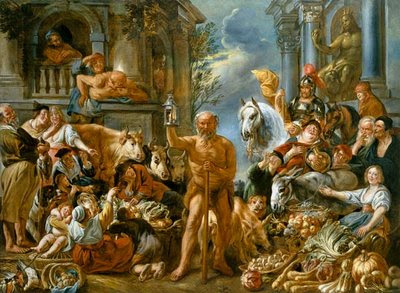 In October 2007, Al Gore was named winner of the 2007 Nobel Peace Prize. (Click here to read his Nobel address.)

Now, in October 2008, Paul Krugman has been named winner of the 2008 Nobel Prize for Economics.

Taken together, and coming as they do in consecutive years, these two choices, informed by global conscience, consensus and common sense, constitute a poignant and compelling challenge to the USA as a whole, yes, as a whole, i.e., the US electorate, the US political establishment, the US business community, and in particular, the US mainstream news media.

Will the US electorate throw off its self-doubt and shell shock, and instead, in a voting booth uprising, seize what was stolen from it in 2000 and 2004?

Will the US political establishment let the lobbyists get the "mailbox is full" messages and the form letter replies, and instead, heed the cry of those two vital but endangered elements of societal health, the natural world and the middle class?

Will the US business community for once lay down the math of the quarterly earnings, and instead, do the math of that other desperately important equation, i.e., what equals survival?

And will the US mainstream news media close the doors even to its own misguided self-interest, and instead, just turn on the cameras and the mikes and tell the people the damn truth about ugly realities such Climate Change and the Cult of Milton Friedman?

Imagine the world we would be living in today if the USA had heeded Gore on the Energy and the Environment and Krugman on the Economy years before the Nobel Committee did.

Imagine the world we would be living in today if the likes of Gore and Krugman had won the Oval Office and the Treasury, instead of the Planetary Consolation Prize.

There is still time. But very little. The window is narrow. The heat is rising, and so is the debt. And the sick among us are getting shrill and growing dangerous as reality dawns all around them. (Click here and decide for yourself.)

Let me make this simple.

"E" as in Either we understand and act on Energy and the Enviroment and the Economy, or it will be the End of this "E Pluribus Unum."

Say "NO!" to fear and self-deceit.

This year’s Nobel Prize for Economics to Paul Krugman achieves the near-impossible: it marks a continuation of past traditions even as it signals
a break from them. In keeping with the tradition of the Nobel in economics, which is to award the prize long after the scholastic work, it has been given for work done almost three decades ago in developing ‘new trade theory’ and ‘new economic geography’.
At the same time, in a break from the past, it has gone to someone who is almost a household name in most of the English-speaking world, a feature usually reserved for winners of the Nobel peace prize and, to a lesser extent, the Nobel in literature. ... With nerves on edge all over the world, it is no wonder Krugman has a fan following few other Nobel laureates in economics can lay claim to. Krugman is the common man's economist, Economic Times, 10-15-08

Most of the discussion going on on the Internet after the announcement of the prize committee, however, was not about Krugman's scientific achievement, but about the strong positions he took as a columnist, author and blogger. ...
Back in 2000, a year after he joined The New York Times, Krugman spent a great deal of effort "trying to alert readers to the blatant dishonesty of the Bush campaign's claims about taxes, spending and Social Security", as he wrote in a column this year. ...
Just recently, Krugman stressed that "the Obama campaign is wrong to suggest that a McCain-Palin administration would just be a continuation of Bush-Cheney. If the way John McCain and Sarah Palin are campaigning is any indication, it would be much, much worse." Many observers are now wondering if the decision of the Swedish prize committee is sending a political message as well.
With recent publications, Krugman has influenced the arrangement of the federal plan to spend 700 billion dollars to cushion U.S. credit markets -- a topic he is long familiar with as his dissertation was on international finance. Wolfgang Kerter, Nobel Honours Man Who Told Bush to "Please Go Away", Inter Press Service, 10-14-8

Economic Insecurity Update: Woods & Forests Are Being Felled Mercilessly, We Will Miss None More Than Bretton Woods

From Wall Street to Galveston: "Sometimes the aftermath of the storm is worse than the storm itself ..."

Economic Insecurity: Will the Cult of Milton Friedman (and Hidden High Priestess, Ayn Rand) be Smashed? -- "None of This Had to Happen ..."

Economic Insecurity Update: False Religion of Laissez-Faire & Milton Friedman, Its Most Persuasive Cult Leader, Have Led Us to a Monetary Jonestown

Randi Rhodes Interviews Naomi Klein -- "Not just the craziness of the Bush gang ... the logical culmination of a 25 year war on the state ..."

SPECIAL EDITION: Generation Debt -- Why Now Is A Terrible Time To Be Young, Words of Power Interviews Anya Kamenetz