Sustainability Crisis Update: The Simple Truth is that Water is Life, if the Water Runs Out, Life Ends -- "What does it take frighten people?

Blue Covenant: the Global Water Crisis and the Coming Battle for the Right to Water (Click here to buy it from Buzzflash) 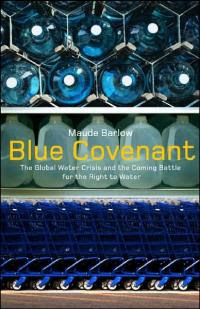 Sustainability Crisis Update: The Simple Truth is that Water is Life, if the Water Runs Out, Life Ends -- "What does it take frighten people?"

From Erin Anderssen writing in the Globe and Mall, news of important recognition for Maude Barlow, a visionary advocate on this life or death sustainability issue and author of Blue Covenant: the Global Water Crisis and the Coming Battle for the Right to Water:

She rattles off a grim list of worries, barely pausing for breath: water supplies in Africa guarded by dogs and chain-link fences while families go thirsty, the vital Murray-Darling Basin in southeast Australia crumbling into desert, the mighty Colorado River in the United States drying up to a trickle.
"The water crisis is deepening everywhere," sighs the 61-year-old activist and head of the Council of Canadians, who has tasted tear gas and faced down stun guns in defence of universal access to clean water. What scares her most is that the problem will not get fixed for her grandchildren.
This week, Ms. Barlow was named senior adviser to the United Nations on water issues - a new position created by General Assembly president Miguel d'Escoto, who raised the subject of water as a human right in his first UN speech in September. Ms. Barlow, who has been meeting with Mr. d'Escoto unofficially since August, agreed to take the position without pay.
"With my heart and soul, I believe it is the single most important environmental and human-rights threat of our time, and it's the one hitting now," she says on the telephone from Winnipeg, where she was attending a conference. "There is nothing 'in the future' about this [issue]." Erin Anderssen, Globe and Mail, 10-25-08

In deep water
1.1 billion people have no access to clean drinking water.
The World Health Organization has found that contaminated water contributes to 80 per cent of all sickness and disease worldwide. Half of the world's hospital beds are occupied by people with an easily preventable waterborne disease.
In China, 80 per cent of major rivers are so polluted that they no longer support aquatic life.
By 2050, based on a population growth of three billion people, humans will need an 80-per-cent increase in water supplies to feed themselves.
In 2006, 200 billion litres of bottled water were consumed globally - a 200-per-cent increase since the 1970s.
For the price of one bottle of Evian, the average North American could buy roughly 4,000 litres of tap water.
Less than 5 per cent of plastic bottles around the world are recycled.
Source: Blue Covenant: the Global Water Crisis and the Coming Battle for the Right to Water, by Maude Barlow