In the Dark of Night in Tehran, in Insein Prison, & in Darfur, the Birds are Singing for the Coming of the Dawn -- Do Not Deny Them, Listen 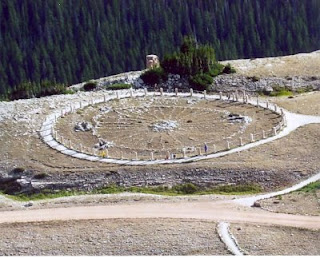 Aung San Suu Kyi, Your heart beats with my heart. My eyes see what you see. My belief is your belief. And my life is connected to thousands of universes, as is yours. Every twinkle of the star must travel billions of years to be seen by us.
But our minds do not have to travel at all to be seen by each other.
Because we are altogether. Yoko Ono, Imagine Peace, 6-19-09

In the Dark of Night in Tehran, in Insein Prison & in Darfur, the Birds are Singing for the Coming of the Dawn -- Do Not Deny Them, Listen

The Dharma Wheel and the Medicine Wheel are one; and as that one Great Wheel turns, with it turn the seasons, the planets, and all life everywhere.

As I write this, the Great Wheel is turning again. It is the moment of the solstice.

The Great Wheel turns on and on, grinding away both good and evil, and milling something beyond both from the grains that the process yields.

Aung San Suu Kyi spent this solstice, the day after her 64th birthday, in Insein Prison.

Hollywood celebrities, singers, writers and dignitaries tweeted, uploaded and signed petitions for the release of Burma's opposition leader Aung San Suu Kyi, who turned 64 in prison Friday. Here are excerpts from birthday messages that appear on a Web site created in her honor: http://64forsuu.org ... Author Salman Rushdie wrote: "On this day, my birthday and yours, I always remember your long ordeal and silently applaud your endurance. This year, silence is impossible... " Irrawaddy, 6-19-09

One week before this solstice, Sudan researcher Eric Reeves posted a warning about a push to "re-write the Darfur narrative":

The historical narrative of the Darfur genocide is presently being re-written. Despite dozens of human rights reports that have established the basic realities of ethnically-targeted human destruction in Darfur and Eastern Chad over the past seven years, an effort is being made to minimise the scale of that destruction, elide the role of ethnicity in the conflict and downplay the responsibility of the Khartoum regime. This large-scale revision has been taken up by those – particularly on the left – with an ideological aversion to humanitarian intervention. If the catastrophe can be portrayed as non-genocidal and essentially local in character, then advocacy efforts – initially for humanitarian intervention and currently for robust support of a weak and ineffectual UN/African Union peace operation – are misguided and misplaced.. Eric Reeves, Sudan Research, 6-15-09

Although Reeves had cited "particularly the left," and singled out author Mahmood Mamdani, two days later, I was disconcerted to read the following lead to a Washington Post story:

President Obama's special envoy to Sudan, retired Air Force Maj. Gen. J. Scott Gration, said Wednesday that the Sudanese government is no longer engaging in a "coordinated" campaign of mass murder in Darfur, marking a shift in the U.S. characterization of the violence there as an "ongoing genocide." Washington Post, 6-17-09

Yes, if you cannot solve a problem, if it would come at too high a geopolitical or economic cost, why not just re-frame it, and pretend it is something other than what it is or that it is no longer what it once was. Is this indeed what is happening now?

And in Tehran, on this solstice, the blood of freedom fighters has been shed.

The uprising of the Iranian people after the theft of their presidential election will mark this moment in history for the foreseeable future; and the image of a young woman bleeding to death will haunt us all until those responsible meet with the wrath of justice (whether human or divine):

A young woman who was standing aside with her father watching the protests was shot by a basij member hiding on the rooftop of a civilian house. He had clear shot at the girl and could not miss her. However, he aimed straight her heart. I am a doctor, so I rushed to try to save her. But the impact of the gunshot was so fierce that the bullet had blasted inside the victim's chest, and she died in less than 2 minutes. The protests were going on about 1 kilometers away in the main street and some of the protesting crowd were running from tear gass used among them, towards Salehi St. The film is shot by my friend who was standing beside me. Please let the world know. Posted on Nico Pitney's Iran Live Blog, Huffington Post, 6-20-09

But do not despair.

There is no turning back, the Great Wheel grinds on ceaselessly.

Dawn emerges mysteriously, glimmering, from the darkest hours of the night.

Listen for the songs of the birds.

Listen for the song of the birds.

They are the heralds of our future.

Do not deny them.