Hey Jude, Patron Saint of Lost Causes, We are All in Hopenhagen, All of Us Not Already on Our Knees in Darfur; It's Gonna Take a Miracle (Well, Two) 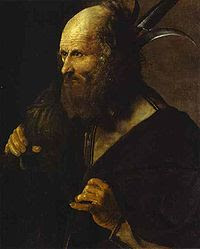 Today 56 newspapers in 45 countries take the unprecedented step of speaking with one voice through a common editorial. We do so because humanity faces a profound emergency.
Unless we combine to take decisive action, climate change will ravage our planet, and with it our prosperity and security. The dangers have been becoming apparent for a generation. Now the facts have started to speak ... Fourteen Days to Seal History's Judgment on This Generation' -- Guardian, 12-7-09

Hey Jude, Patron Saint of Lost Causes, We are All in Hopenhagen, All of Us who are Not Already on Our Knees in Darfur; It's Gonna Take a Miracle (Well, Two)

A friend recently asked me when I was going to write about Afghanistan. It won't be for awhile. Yes, what has happened there over the last few decades is TRAGIC. Yes, what has not happened there over the last eight years is INFURIATING. Yes, what is going to happen there in the coming weeks, months and years is deeply DISTURBING. But as tragic, infuriating and disturbing as it is; the problem of Afghanistan is overshadowed by the Climate Crisis (albeit seemingly invisible, especially if your head is in the sand, or somewhere else dark and below the belt). Nor is the problem of Afghanistan any more demanding of our attention than the still looming specter of genocide in Darfur (albeit slow-moving and flimsily camouflaged).

Tonight, I am thinking of Jude (not Judas) the Apostle. According to the Roman Catholic Church (into which I was born), Jude is the Patron Saint of Lost Causes. Of course (and as a fallen Catholic, I am free to say this), it did occur to me that perhaps Jude's first priority should be the Church itself, based on massive cover-ups of child abuse perpetrated by "priests" in the US, Ireland and elsewhere, as well as the U.S. Bishops' push to insinuate the poison pill of the Stupak Amendment into the House health care reform bill. But I digress ...

St. Jude is no slouch, by the way. He brought Christianity (the real Christianity, i.e., barefoot, in poverty, in non-violence) to Armenia. Ah yes, speaking of genocide, Darfur is one of the two Lost Causes I am praying to St. Jude to work his magic on.

Indiscriminate bombings, rape and other crimes are continuing in Darfur, the Prosecutor for the International Criminal Court (ICC) said today, while noting that the Government of Sudan still refuses to cooperate with his office and its indicted President and other suspects remain at large. UN News Service, 12-4-09

Is US Envoy Gration a fool? And what does his appointment and continued presence in the post say about the Obama-Biden administration's commitment to a meaningful policy on Darfur? I pray to be proven wrong. And if I am, by some miracle, I will attribute it to the intercession of St. Jude.

The other lost cause, of course, is Copenhagen, or Hopenhagen, if you will.

It will be getting underway as this is posted.

I have been beating this drum for years now, nearly a decade ago I was talking about the Climate Crisis as one of the top two national and global security risks. (Nuclear proliferation is the other, ah, and that would bring us back to Afghanistan, wouldn't it? Because when we are talking about Afghanistan, we are really talking about Pakistan, aren't we?)

Yes, I have been looking for a miracle at Copenhagen, I mean Hopenhagen.

I am not going to give up now, no matter what James Hansen says.

Do not misunderstand me.

There is no one more worthy of respect than James Hansen in all this already painfully long struggle to move humanity to action on climate change (the Words of Power archives contain numerous examples of his heroic efforts), and although I understand his position all too well, he is wrong on this one.

In an interview with the Guardian, James Hansen, the world's pre-eminent climate scientist, said any agreement likely to emerge from the negotiations would be so deeply flawed that it would be better to start again from scratch. Guardian, 12-2-09

I stand with Gorbachev on this one.

The Copenhagen climate summit is a "test of modern leadership" and a failed outcome would almost certainly condemn the planet to disaster, Mikhail Gorbachev said ... "The 'business-as-usual' mindset and incremental approach that dominates the world thinking today is the source of our multiple crises -- economic, financial and environmental. We are currently in a genuine global emergency that requires a new way of thinking." Gorbachev argued that a breakthrough was still possible, even if the summit did not yield the legally-binding treaty originally envisioned. Agence France Press, 12-3-09

Image: Tara, the Green Goddess of Mercy, and Her Twenty-One Emanations

I stand with Jeffrey Sachs on this one.

Climate change is the most complicated issue the world has faced. Complex -- but not hopeless. It's time to put the expertise at the front table, not to supplant public debate and discussion but finally to inform it. Copenhagen should be the end of negotiation by politicians with technical issues kept in the shadows or ignored. Let's get scientists, engineers and ordinary citizens involved in a true discussion about our common future, and especially the tradeoffs, costs and choices. Together we can prove that our world is still capable of reaching long-range agreements when our children's lives and wellbeing hang in the balance. Jeffrey Sachs, Huffington Post, 12-3-09

If it doesn't work, there will be plenty of time to re-invent ourselves as survivalists. Well, actually, there might not be that much time ...

In the film, "The Day After Tomorrow," the world gets gripped in ice within the span of just a few weeks. Now research now suggests an eerily similar event might indeed have occurred in the past.
Looking ahead to the future, there is no reason why such a freeze shouldn't happen again — and in ironic fashion it could be precipitated if ongoing changes in climate force the Greenland ice sheet to suddenly melt, scientists say. Charles Q. Choi, LiveScience, 12-2-09

Also, find out why 350 is the most important number in your life and the life of everyone you love.