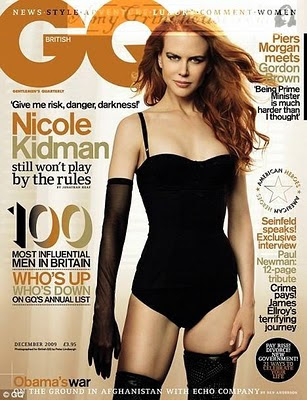 So while the actual “ground- breaking” takes place in this historic place in San Francisco, the virtual “ground- breaking” will be seen in Rwanda, Ecuador, East Timor, Bulgaria, or China. And by reaching out beyond our borders we acknowledge that violence against women is a pandemic that respects no geographical boundary, no race or class. How could it be otherwise when one in three women will be beaten, coerced into sex or otherwise abused in her lifetime? When survivors endure stigma and perpetrators routinely walk free? Nicole Kidman, UNIFEM Goodwill Ambassador, Ceremony for the International Centre to End Violence, 1-8-10

In the Global Fund's own experience, when girls and women have greater access to education - not just the 3 R's: reading, 'riting and 'rithmetic, but also the 3 C's: courage, contraception, and choice - their improved health leads to positive community outcomes including economic growth and sustainable development. We agree with columnist Ellen Goodman: "if we can lighten the burden on the planet while widening the chances for women," that's our kind of offset. And, at least on the issues of women's reproductive rights, this is proving to be our kind of State Department. Kavita N. Ramdas, Why Women's Reproductive Freedom Ensures Our Survival, IPS, 1-8-10

Personally, my writings on human rights and sustainability were initially centered on two issues: first, the plight of child soldiers and the victims of child abuse, because of what I understood from my own severe childhood traumas; and second, with the threat of global warming, both because of what I analyzed as its potential impact on the global threat matrix as a whole, and because of nature's intense and integral role in my own shamanic journey.

Through her work with the United Nations Development Fund for Women (UNIFEM), Nicole Kidman invests her stardom in the struggle to empower women in the 21st Century, with a particular focus on ending violence against women. As one of several recurring story-lines, Words of Power follows Kidman's work with UNIFEM.

In my view, celebrity activism, such as Kidman's (and George Clooney's, and Angelina Jolie's) is vital to raising awareness in this dysfunctional kulchur; although, of course, I acknowledge that it is an object of derision by cynics at both ends of the ideological spectrum. Never has the usefulness of stardom been more evident. Consider that at this time of great national crisis (economic, environmental and security-related), the season premiere of a TV drama has forced the rescheduling of the SOTU from POTUS.

Just as there is magic in stardom, there is also magic in place; and San Francisco is a sacred place. After all, in 1945, the United Nations was founded in San Francisco. And, as one of our most powerful modern myths promises, sometime in the 2150s, at the end of the Earth-Romulan War (or some equivalent thereoof), the Council of the United Federation of Planets will have its home in the Presidio.

Indeed, critical mass is gathering there. The Presidio is already the home of a cluster of worthy organizations, such as the Gorbachev Foundation

On 1-8-10, the magic of stardom and the sacredness of place came together in ceremony for the groundbreaking of the International Centre to End Violence to be established in, yes, the Presidio.

Meanwhile, across the USA, in Beltwayistan, U.S. Secretary of State Hillary Clinton was delivering a keynote address, marking the 15th anniversary of the International Conference on Population and Development (1994)

And just as U.S. Secretary of Labor Hilda Solis had done earlier in the day, with her announcement of a $500 million Recovery Act to promote economic growth by preparing workers for careers in the energy efficiency and renewable energy industries (including $100 million for 24 green jobs training projects), Clinton was not only doing a significant good in this vital area of public policy; she was, by extension, offering progressives a powerful example of how much difference there really is between the leadership of the Democratic Party (however compromised) and the leadership of the Cult-formerly-known-as-the-Republican-Party. Such reminders are of great importance, as we try to wrap our minds around the Democratic Party establishment's complicity with Wall Street banksters and health insurance racketeers.

On the same day as the groundbreaking ceremony in the Presidio and Clinton's Beltwayistan speech re-affirming the USA's commitment to the Cairo agreement, Kavita N. Ramdas, President and CEO of the Global Fund for Women (the world's largest women's foundation dedicated to advancing the rights of women) published an important Op-Ed:

Fifteen years ago in Beijing, then first lady, Hillary Clinton, stated firmly, "Women's rights are human rights." Today, after eight years of non-existent U.S. support for women's reproductive rights, Secretary of State Clinton is reviving women's hopes around the globe by affirming the Obama Administration's support for the International Conference on Population and Development Action Plan.
This historic agreement, signed by 180 nations in Cairo in 1994, outlined a visionary 20-year strategy for making family planning universally available by 2015. The Cairo declaration saw women's human rights take a quantum leap forward ...
Secretary Clinton's speech comes on the heels of a dismal global conversation on climate change that made it all too clear that we must find ways to effectively offset carbon emissions. Population growth and climate change will collide in ways that will put all our lives at risk and will most grievously harm the poorest countries.
In the Global Fund's own experience, when girls and women have greater access to education - not just the 3 R's: reading, 'riting and 'rithmetic, but also the 3 C's: courage, contraception, and choice - their improved health leads to positive community outcomes including economic growth and sustainable development. We agree with columnist Ellen Goodman: "if we can lighten the burden on the planet while widening the chances for women," that's our kind of offset. And, at least on the issues of women's reproductive rights, this is proving to be our kind of State Department. Kavita N. Ramdas, Why Women's Reproductive Freedom Ensures Our Survival, IPS, 1-8-10

Here is another excerpt from Ambassador Kidman's remarks, with a link to the full text:

In 2008, more than 5 million people added their names to our call that governments everywhere make ending violence against women a top priority. People from all corners of the world joined forces. That’s why this year’s Say NO campaign is all about actions. Our website, launched in early November 2009, has already recorded more than 35,000 calls to action around the world. And that brings us to the events of today in San Francisco
As we break ground for an international centre to end violence against women and children, there is no doubt that the issue is urgent and belongs on centre stage. It also requires strong partnerships, like the one we’re announcing today between UNIFEM and Family Violence Prevention Fund. Behind us we see what the walls and windows will look like. But the centre will take life from our shared vision and what we and many others bring through its doors. In this place we will share strategies and models so that others can build on these good practices.
As a UNIFEM Say NO partner, Family Violence Prevention Fund will add pictures and reports of today’s event — and UNIFEM will use the internet and social media to reflect these back to its global audience. Nicole Kidman, UNIFEM Goodwill Ambassador, Ceremony for the International Centre to End Violence, 1-8-10

For information on all of Richard Power's books, visit his Author's Page on Amazon.com.