Between the Third Depression & the Sixth Great Extinction: "The Falcon Cannot Hear the Falconer" 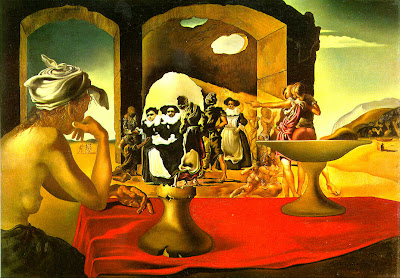 Turning and turning in the widening gyre
The falcon cannot hear the falconer;
Things fall apart; the center cannot hold;
Mere anarchy is loosed upon the world,
The blood-dimmed tide is loosed, and everywhere
The ceremony of innocence is drowned;
The best lack all conviction, while the worst
Are full of passionate intensity.
W.B. Yeats, The Second Coming

Between the Third Depression & the Sixth Great Extinction: "The Falcon Cannot Hear the Falconer"

Yeats wrote this poem in the aftermath of the carnage that was to be "the War to End All Wars." It has been coming to mind lately; not for the first time in my life, of course, but perhaps with its greatest significance. (Nor am I the only one who it has haunted over the last few decades. Joan Didion choose a line from it for the title of her brilliant books of essays on the Kulchur of the 1960s, Slouching Toward Bethlehem; and in 1991, Joni Mitchell set it to music on Night Ride, and re-released it on The Beginning of Survival in 2004.)

Why it is coming to my mind now? Well, another G-20 Summit has come and gone, and this one may go down in infamy.

Nearly 600 people were arrested as global leaders and elites met behind a fortified perimeter during the G8 and G20 Summits ... The tension was palpable on the subway as the Toronto Transit Commission (TTC) announced that under a "police directive" all routes in and out of the downtown core would be suspended midday Saturday ... During the summit, several dozen of the globe's most powerful CEOs were given exclusive, off-the-record meetings with the G20's finance ministers and Prime Minister Harper. As Canada's Democracy Trembles, a New Global Architecture Emerges, IPS, 6-28-10

At least, the ignorant and deeply disturbed man who previously represented the USA at the G-8 and the G-20 has been replaced by an intelligent and well-balanced individual. Unfortunately, this change, although a great relief to all involved, did not prove enough to deliver meaningful results.

... what actually happened at the summit is that the global elites just stuck the bill for their drunken binge with the world’s poor, with the people who are most vulnerable, because that is really who’s going to pay, when they balance their budgets on the backs of healthcare programs, pension programs, unemployment programs. And also, the other thing that they did at this G8 summit, that preceded the G20 summit, is admit that they were not meeting their commitments to doubling aid to Africa, once again, because of the debt that was created by saving the banks. Amy Goodman Interviews Naomi Klein: The Real Crime Scene Was Inside the G20 Summit, Democracy Now!, 6-28-10

The die is cast.

The journey from this point on is a razor's edge between two yawning chasms.

We are now, I fear, in the early stages of a third depression. It will probably look more like the Long Depression than the much more severe Great Depression. But the cost — to the world economy and, above all, to the millions of lives blighted by the absence of jobs — will nonetheless be immense.
And this third depression will be primarily a failure of policy. Around the world — most recently at last weekend’s deeply discouraging G-20 meeting — governments are obsessing about inflation when the real threat is deflation, preaching the need for belt-tightening when the real problem is inadequate spending. Paul Krugman, The Third Depression, NY Times, 7-28-10

Australian microbiologist, Frank Fenner, "a fellow of the Australian Academy of Science and of the Royal Society, has received many awards and honours" warns that the human race is already being swept up into the Sixth Great Extinction.

"We're going to become extinct," the eminent scientist says.
"Whatever we do now is too late."
Fenner is an authority on extinction. The emeritus professor in microbiology at the Australian National University played a leading role in sending one species into oblivion: the variola virus that causes smallpox.
And his work on the myxoma virus suppressed wild rabbit populations on farming land in southeastern Australia in the early 1950s ...
"As the population keeps growing to seven, eight or nine billion, there will be a lot more wars over food," he says.
"The grandchildren of today's generations will face a much more difficult world." Frank Fenner sees no hope for humans, The Australian, 6-16-10

Whether or not we come to grips with the Climate and Sustainability Crises will determine the future of human civilization.

Whether or not we turn the "blood-dimmed tide" in Darfur and the Congo will not only determine the fate of millions of women and children, it will also define who we are.

The darkness drops again; but now I know
That twenty centuries of stony sleep
Were vexed to nightmare by a rocking cradle,
And what rough beast, its hour come round at last,
Slouches towards Bethlehem to be born?

Posted by Richard Power at 9:14 PM