I Am a Pelican of the Wilderness; As the Web of Life Suffocates in a Man-Made, Deep-Sea Volcano of Black Crude; Time to Revive an Ancient Symbol 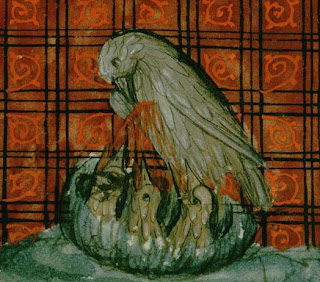 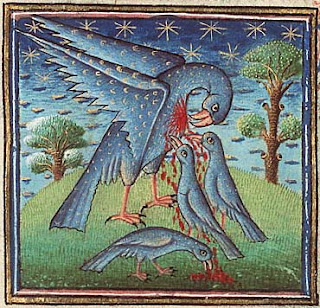 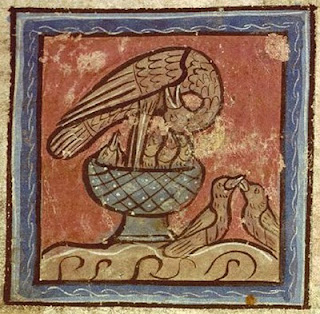 "I am a Pelican of the Wilderness ..." As The Web of Life Suffocates in a Man-made, Deep-Sea Volcano of Black Crude; Time to Revive an Ancient Symbol

Yes, it's that simple.

Now here we are, in the midst of a marine holocaust.

The pictures BP didn't want you to see started to come out late last week.

My first encounter with the pelicans occurred in the 1970s at Mazatlan, on the pacific coast of Mexico. I had been there for a couple of days, eating spicy sea turtle soup, and immersing myself in the mirrored azure of sky and sea.

Early one morning, I came across a large pelican perched on a mooring. With a sideways glance, it gazed deep into my soul.

Some years later, in San Francisco, I was leafing through Psalms in the King James Bible, and I came across the line, "I am a pelican of the wilderness ..." (It's the 102rd Psalm, "A Cry of Distress.") Since I was, at that time, in the throes of an existential despair, the poetic image fell like rainwater on the parched, cracked soil of my psyche.

That afternoon, I went out to the beach to walk barefoot in the surf, and chant the Tara mantra. (Tara is the Great Green Goddess of Compassion. In statues, She is often depicted rising from seated meditation, to answer the cries of sentient beings lost in suffering.)

As I trudged along, a pelican soared by, and then another. Indeed, out beyond the breakers, there were flocks of them, soaring in formation with speed and precision, and then breaking off to dive, daredevil and solo, into the sea.

It was my first summer that far out on the avenues; and I didn't know that the pelicans went fishing off of City Beach every year.

That was a powerful epiphany; I realized, in that moment, that the "pelican of the wilderness" was not alone, it was but a single strand inextricably woven into a vast, rich and incomprehensibly intricate web of life.

There is some great mystery to it all.

In the medieval bestiaries, in the mystical imagery of both Christianity, Hermiticism and Masonry, and to this day, even in some official flags and emblems (including, ironically, seal of the State of Louisianaa), the pelican serves as a profound symbol of love and self-sacrifice (i.e., what the ancient Greeks had called agape).

According to legend, the mother pelican nourished her own heart's blood to her young.

It is time for a revival of this ancient mystical symbol.

Nothing could be more poignant, or more purposeful, than to turn this nightmare into the teachable moment that thrusts us forward into a sustainable future.

What must we do?

We must declare a moratorium on new off-shore drilling, globally:

The International Union for the Conservation of Nature (IUCN) said the moratorium should include deepwater ocean sites the industry is increasingly exploring to cope with growing energy demand, despite higher financial and environmental risks. Global halt to oil drilling in eco areas urged, Agence France Press, 6-4-10

We must champion radical transformation of the energy sector:

The bottom line: if you neglect all the offsets and loopholes, we're aiming for a 4% reduction in carbon emissions from 1990 levels by 2020. Make your blood stir? Obama's not proposing real solutions to real problems; he's ticking off items on a list. He got a health care bill, and just maybe he'll get an energy bill (though that's an increasingly slim "maybe"). But we don't need the bill, we need the thing ... to have a chance we need a leader. We need someone to stand up and tell it the way it is, and in language so compelling and dramatic it sets us on a new path. On this planet of nearly seven billion, at this moment in history, there's exactly one person who could play that role. And so far he hasn't decided. Bill McKibben, If There Was Ever a Moment to Seize, Tom Dispatch, 6-6-10

[According to a new Greenpeace study] switching to renewable energy sources could create 8.5 million jobs by 2030 if governments turn their backs on "dirty and dangerous" fossil fuels ... the global market for renewable energy sources such as solar or wind power could be worth more than 600 billion dollars by 2030, a six-fold increase from now. The forecasts are based on a scenario of carbon dioxide emissions being cut by more than 80 per cent by 2050 from 1990 levels, and 95 per cent of the world's electricity needs being produced by renewables compared with around 18 per cent at present. Greenpeace, 6-7-10

And yes, in the USA, we must end the perversion of bestowing the "Rights of Man" (and Woman) on corporations:

Corporations are now a sort of super-being: They can live forever, they cannot be jailed, they have no conscience-yet they also enjoy virtually all the rights that humans have. Doug Pibel, Real People v. Corporate “People”: The Fight Is On, Yes! Magazine, 6-4-10'