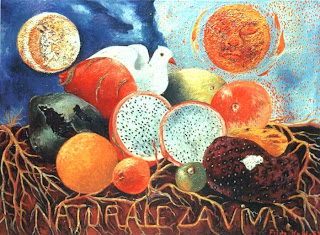 I'm dreaming, I'm dreaming. It's so beautiful -- wake me up!" said Tutu, dressed in a yellow South African football shirt and matching bobble hat ... "We want to say to the world: 'Thank you for helping this ugly, ugly worm, or caterpillar which we were, to become a beautiful, beautiful butterfly ... Africa is the cradle of humanity so we welcome you all, every single one of you. We are all Africans," he added. S.Africa's Tutu in dreamland on eve of World Cup, Agence France Press, 6-10-10

This life, so exquisite.

This moment, so poignant.

In South Africa, the World Cup runneth over, and the spill from that outpouring of emotion spreads out across the planet, and then funnels in upon itself.

Meanwhile, in the Gulf of Mexico, a man-made undersea volcano of black crude continues to spew forth every moment of every day. It, too, is likely to spread out across the planet, and funnel in upon itself. But it is spreading only death and despair.

"Make a joyful noise unto the Lord ..." (Watch the You Tube videos of Tutu and Shakira)

The World Cup is at once beatific and grotesque:

North Korean soccer fans in Pyongyang cheered for South Korea in its 2-0 win over Greece at the World Cup. Irrawaddy, 6-15-10

In Britain, power engineers are bracing for huge spikes in demand for electricity at the end of games—as TV viewers emerge from their couches, switch on lights, grab drinks from fridges and turn on kettles for cups of tea. In Brazil, beer consumption is expected to rise sharply. The government slashed import tariffs on beer cans to avoid shortages. Banks will close when Brazil plays. John Leicester, AP, 6-12-10

An icon of savage capitalism, FIFA never loses money. It's fully insured. For this World Cup and the next one in 2014 in Brazil, that amounts to $650 million. As for national governments, the deals are not that sweet. South Africa's government planned to spend $450 million for this World Cup. Costs mushroomed to no less than $6 billion - and going. Pepe Escobar, Asia Times, 6-12-10

The World Cup in South Africa will attract more than just the 2.2 million tourists who have bought match tickets. Up to 100,000 prostitutes will enter the region this summer, an influx which will swell an already out of control industry where an estimated 50 per cent of sex workers are infected with HIV. Independent, 6-3-10

The soccer stars and Goodwill Ambassadors for the United Nations Development Programme (UNDP), Didier Drogba and Zinedine Zidane, today launched a television announcement exhorting the world to make a concerted effort to help millions of people free themselves from poverty. UN News Centre, 6-14-10

Do not deny the ugliness that feeds off of it, but do not allow that to rob you of the truth and beauty of it: futbol is the Beautiful Game; nothing but hope can be taken away from an event that brings men from all the nations to compete, empty-handed and barelegged, unable to wield a weapon, with no armor to hide behind. Vulnerable, in ceaseless motion, relying on their feet and skulls only. Playing even for a tie. No, nothing but hope can be taken from it; especially, when that event is held on the continent of Africa.

Meanwhile, an ecocide is spreading in the Gulf of Mexico; and this regional catastrophe threatens to become a planetary one.

Here are three important stories on how much woe may lie ahead, and one important story on how we arrived inside of this nightmare, but you should have heard these stories from the mainstream news media or from POTUS himself, you should not have to hear them from me:

A dire report circulating in the Kremlin today that was prepared for Prime Minister Putin by Anatoly Sagalevich of Russia's Shirshov Institute of Oceanology warns that the Gulf of Mexico sea floor has been fractured “beyond all repair” and our World should begin preparing for an ecological disaster “beyond comprehension” unless “extraordinary measures” are undertaken to stop the massive flow of oil into our Planet’s eleventh largest body of water. Sorcha Faal, Before Its News, 6-10-10

The Obama Administration and senior BP officials are frantically working not to stop the world’s worst oil disaster, but to hide the true extent of the actual ecological catastrophe. Senior researchers tell us that the BP drilling hit one of the oil migration channels and that the leakage could continue for years unless decisive steps are undertaken, something that seems far from the present strategy. F. William Engdahl, Global Research, 6-11-10

One of the world's leading authorities on oil well management has warned it could take until Christmas to cap the Gulf of Mexico spill that is devastating the southern coast of America – and BP's reputation. Nansen Saleri, a Gulf drilling expert, said he hoped BP would meet its August timetable for capping the blown-out well, but made it clear success was not certain. Guardian/UK, 6-14-10

AMY GOODMAN: Well, President Obama might now have some harsh words for BP, but an extensive new investigation into his administration’s handling of the disaster reveals it was government mismanagement, delays, and absence of oversight that allowed the crisis to spiral out of control. The article is called "The Spill, the Scandal, and the President." It’s published in the latest Rolling Stone. Author Tim Dickinson is a political correspondent for Rolling Stone magazine ... Welcome to Democracy Now!, Tim. What surprised you most about your investigation?
TIM DICKINSON: That’s a tough one. There’s a lot of doozies in here. I think—I think just the fact—I had written a fairly credulous piece about Ken Salazar when he came in, was appointed with his white hat and his bolo tie, and declared himself to be the new sheriff in town. And we had talked very specifically about his intent to clean up MMS. In fact, one of the first things that he did upon taking office was go to MMS and bust chops and say, "Listen, this behavior that’s been going on for all these years isn’t going to fly anymore." And Salazar assured me personally that this was not just about ethics reforms, this was, you know, deep, thorough-going reform.
But it turned out that—I think the thing that was most surprising is that Ken Salazar, in the first year in office, put a record number—a record number of acres up for lease in the Gulf. So, while they were taking, you know, drilling out of view of national parks on land and scaling back the oil shale development, they were throttling up offshore oil drilling to record levels without doing the substantive reform that would have been required to make MMS something other than a candy store for the oil companies. Democracy Now!, 6-11-10