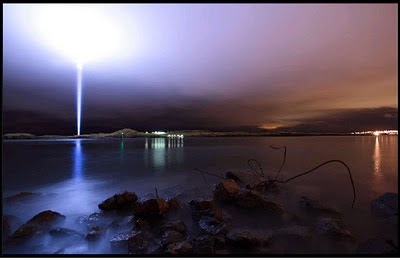 Instant Karma's gonna get you,
Gonna knock you right on the head,
You better get yourself together,
Pretty soon you're gonna be dead,
What in the world you thinking of,
Laughing in the face of love,
What on earth you tryin' to do,
It's up to you, yeah you.
John Lennon, Instant Karma
Instant Karma: On the Day After 10/10/10, and the Day After the Day After, Keep the Beacon Lit on the Climate Crisis and Darfur

On Saturday, 10/9/10, in Reykjavik, Iceland, Yoko Ono lit the geothermal-powered Imagine Peace beacon on what would have been John Lennon's seventieth birthday. Inaugurated on October 9th, 2007, the beacon will remain lit every year until December 8th, the anniversary of his death by assassination; it is also lit on the Winter Solstice, the Gregorian calendar New's Year and the first week of Spring.

The Imagine Peace Tower, with its title inscribed on the Well in 24 Languages, is a symbol to the famous couple's dedication to peace throughout their marriage and Yoko Ono's continuing mission ... One of the alluring features of the artwork is that the strength, intensity and brilliance of the light from the Imagine Peace Tower continually changes with the prevailing weather and atmospheric conditions unique to Iceland - creating a clear pillar of light on a cloudless night, iridescent in the rain or snow, and brilliantly reflecting off and through any layers of cloud.

On Sunday, 10/10/10, Bill McKibben's 350.org led the largest global action in human history to attempt to turn the wheel on the Climate Crisis, which is no less than the greatest challenge of our age. The 10/10/10 action consisted of 7,347 work parties in 188 countries.

In Budapest, participants were fed a delicious lunch and encouraged to commit to abiding by a 50 kilometer diet for a month, i.e., consume no food grown more than 50 kilometers from where they live. In Moscow, Greenpeace Russia organized an acorn harvest; the 3000 kg of acorns will be used for reforestation after the forest fires that devastated the region this past summer. "In the Democratic Republic of Congo, war refugees will plant a "Forest of Hope" while in Iraq, students will install solar panels on the roof of the University of Babylon." (AFP, 10/10/10) In NYC's Harlem, people painted roofs white. In Costa Rica, ten people planted ten trees in less than sixty five seconds. In Chumey, Bhutan, young people cleaned up their river and displayed their 350 quilt calling on global leaders to pass clean energy policies.

The UN Security Council ambassadors also went to Darfur, but they failed to ask or answer the right questions:

In the week before the UN Security Council arrived in Darfur, the village of Sora “was completely burned down” as part of “intense ground fighting and aerial attacks in Eastern Jebel Marra.” ... But the destruction of Sora, and the systematic dismantling of the Kalma Internally Displace Persons camp, were not highlighted to the Council ambassadors by the UN's Humanitarian Coordinator for Sudan, Georg Charpentier.
Not a single question about Darfur was taken at the press conference on Saturday ending the UN Security Council's mission to Sudan. In the basement of the luxury Rotana Hotel, the outgoing Public Information Officer of the UN Mission in Sudan chose five questions, all about the North - South referendum, including questions from the UN's own media. Matthew Russell Lee, Inner City Press, 10-9-10

We are in the throes of 100 Days of Action on Sudan, leading up to this "referendum."

Take a moment, and send POTUS a message. Tell him to sack Scott "Pollyana" Gration.

If you want some talking points, refer to Eric Reeves latest analysis:

Gration is either appallingly ignorant or chillingly cynical: even after a year-
and-a-half as special envoy, he remains peculiarly opaque. Certainly it’s no
secret that U.S. policy toward Sudan has deemphasized Darfur. But to
embrace “enthusiastically” the plan, the “strategy” of a regime that has
violated every commitment it has ever made, that has reneged on every
agreement it has ever signed with a Sudanese party—every one—is a
decision that deserves serious scrutiny, particularly since Gration’s remarks
were reported only in the Sudan Tribune ... The enthusiastic embrace of this plan
by the AU, the UN, and the United States is a measure of how fully Darfur
has been abandoned, how little the words of outrage from President Obama
really mean, and how attenuated the chances are for any sort of peace
agreement. The world has signaled to Khartoum’s génocidaires that they are
free to go about their business in Darfur; and as the killings in Tabarat
demonstrate, business is brisk. Eric Reeves, Dissent, 10-8-10

Oh yes, and remember to vote on November 2nd.

Here is a statement of political reality that should make your decisions painfully simple:

“The GOP is stampeding toward an absolutist rejection of climate science that appears unmatched among major political parties around the globe, even conservative ones.” Ron Brownstein, National Journal, quoted in Climate Progress, 10/10/10

In other words, if you vote Republican in this election, you are voting for the degradation of life on this planet. Understood?

Thank you, Yoko, for building the Imagine Peace Tower, and lighting the beacon again this year. May all of us mirror this positivity and kindness back to you in courageous words and valorous deeds.

Meanwhile, I encourage you to find out why 350 is the most important number in your life and the lives of everyone you love: go to 350.org for the answer.

And as always, I encourage you to follow events in Darfur on Mia Farrow's site, it is the real-time journal of a humanitarian at work; the content is compelling, insightful and fiercely independent.

Posted by Richard Power at 3:21 AM