Welcome to the Machine. Meanwhile, the Hands in the Cave Paintings are Reaching Out to Us; Their Touch Transmits a Message 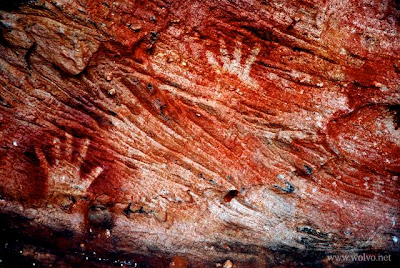 The death toll from the Gulf of Mexico oil spill goes far beyond the animal corpses washing ashore, says a report that warns that whale and dolphin deaths may be 50 times higher than believed. Post Media News, 3-30-11

Following our first monitoring team’s radiation findings, we called on the Japanese government to evacuate the contaminated areas outside the official zone ... Staying in Iitate for just a few days could mean exposure to the annual allowable dose of radiation ... The government has yet to call for an evacuation. Greenpeace, 4-4-11

Welcome to the Machine. Meanwhile, the Hands in the Cave Paintings are Reaching Out to Us; Their Touch Transmits a Message

The cave paintings are the most powerful of paintings, and the most powerful cave paintings are the hands. They appear in many places, notably in Australia and in Argentina. Even across ten millennia, even across fifty millennia, the meaning of the symbol is no mystery. "We were here. You are here. We are you. You were us. When we were afraid you are afraid, when you are hungry we were hungry. Time is a whirling hoop. Touch is the greatest power of this world, and second only to Mind to Mind, which is of course beyond this world. Feel the power of love in your hands. Touch informs, touch heals. It was given to us from the beginning, we celebrate it, we touch you in dream-time ..."

Welcome to the Anthropocene

Welcome to the Antropocene. That's what scientists are calling this cheap knock-off of "Brave New World."

The Holocene – the 10,000 years through which we have just come – was by all accounts a period of calm and stability on Earth ... We're now moving into a new geological epoch, one scientists are calling the Anthropocene – a world remade by man, most obvious in his emissions of carbon dioxide ... We still have plenty of purely natural disasters – though scientists can posit reasons climate change might make the world more seismically active, tectonic and volcanic forces seem beyond our reach; the great wave that broke over Sendai really did come out of the blue. But even in Japan, of course, the disaster was not entirely "natural". The subsequent fallout was… fallout, the invisible plume streaming from one of our highest-tech marvels, a complex reduced in minutes into something almost elemental, a kind of utility-owned volcano Bill McKibben, Natural Disasters?, Guardian, 4-2-11

It's not going too well.

The Amazon has been hit by its second 'once in a century' drought in five years, scientists say. Daily Mail, 2-4-11

More than one billion urban residents will face serious water shortages by 2050 as climate change worsens effects of urbanization, with Indian cities among the worst hit ... Agence France Press, 3-29-11

Yes, welcome to the machine. Madness embracing madness; is this the new norm? Sadly, yes.

Remember, oceans are the life of this planet, right?

Now consider this latest evidence from the ongoing narrative of the the Gulf Ecocide:

The offshore drilling firm responsible for running the Deepwater Horizon rig has given its top executives bonuses for its "best year" for safety. BBC, 4-3-11

Oil giant BP plans to restart deepwater drilling in the Gulf of Mexico this summer, just a year after an explosion on one of its rigs sparked the worst spill in history. The group hopes to start work on 10 wells in the Gulf after being granted permission by U.S. regulators to continue work ... Daily Mail, 4-3-11

Now consider this latest evidence from the developing story of the Fukushima Multiple Meltdown:

Workers tried Sunday to block the leakage of highly radioactive water into the sea from the crisis-hit Fukushima Daiichi nuclear plant by injecting polymeric water absorbent that can soak up 50 times its volume, but the water flow remains unaffected ... Chief Cabinet Secretary Yukio Edano, meanwhile, told a press conference that it could take several months before radiation stops leaking from the plant ... Kyodo News, 4-3-11

The operator of the crippled Fukushima complex begins releasing 11,500 tons of radioactive water into the Pacific to make room in storage tanks for even more highly contaminated water. Los Angeles Times, 4-4-11

Hands at the Cuevas de las Manos upon Río Pinturas, near the town of Perito Moreno in Santa Cruz Province, Argentina 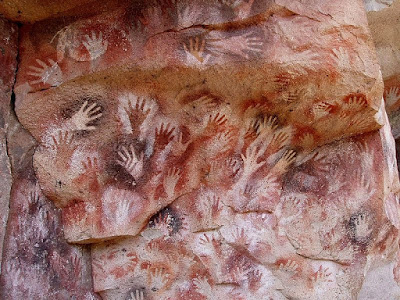 Meanwhile, as I have written again and again over this last decade, the Climate Crisis is our greatest existential threat, on both the national and global levels; it trumps everything except the nuclear threat, with which it ends in a dead heat (no pun intended). And as I have also said over and over again, Darfur is our greatest test of conscience; simply because we have lived with it now, in plain sight, pregnant with another genocide, for almost a decade.

How are we doing in overcoming these two great challenges?

Given control of the White House, the U.S. Senate and the U.S. House of Representatives in 2008, with an opportunity to make up for a lost eight years under Bush-Cheney, the leadership of the Democratic Party tragically cowered and hide on the greatest challenge of our time, avoiding even the mention of it; and they did not have to do so.

Some of the best pollsters have known for years that progressives can and should talk about climate change ... Ironically, many people think the failure of the climate bill proves that talking about climate change doesn’t work — because they don’t realize that the messaging campaign built around the climate bill was based on not talking about climate change! ... Nearly $200 million was spent by environmental, progressive, and business groups in 2009 and 2010 to sell a climate bill. The vast majority (but not all) of that messaging was built around ignoring the climate message and instead talking about clean energy jobs, energy security, and the threat from China. Worse, the progressive political leadership (again with exceptions, such as Sen. John Kerry) also generally either refused to talk about climate change or they seriously downplayed the subject. That includes, most importantly, President Obama and the entire White House communications team [see "The unbearable lameness of being (Rahm and Axelrod)"]. Joe Romm, Climate Progress, 4-3-11

No, I am not oblivious to the slaughter in Cote d'Ivoire and elsewhere; but I remain fixed laser-like on Darfur, because it has been with us for the most part of a decade now, ample time for the great nations to come to grips with the situation, especially if you consider POTUS' 2008 campaign rhetoric about U.S. Darfur policy.

But the truth is that the people of Darfur are in greater danger today than they were two years ago, and it did not have to be this way, as Eric Reeve's Open Letter to President Obama articulates:

General Gration is soon to leave his position, though I believe his appointment to be ambassador to Kenya is deeply mistaken, especially given the important challenges facing our diplomatic leadership in Nairobi. But the damage he leaves behind, the threats he leaves unaddressed, the dangers he has allowed to fester—all oblige on your part, Mr. President, a sober recognition of General Gration’s destructive legacy, and a near-term commitment to ensure that officials from the highest levels of your administration conduct an urgent review of the consequences of the past two years of our Sudan policy. It is far past time to re-set the U.S. course of action vis-à-vis Khartoum ... A strong and unambiguous signal is required, given the immediacy of dangers faced by many Sudanese populations—in the South, in Darfur, in the Nuba Mountains, and in southern Blue Nile. I believe you personally should send that signal, Mr. President. If your administration simply continues on the course set by General Gration, your administration will bear increasing moral responsibility for the many hundreds of thousands of lives presently acutely endangered by his actions and decisions of the past two years. Eric Reeves, An Open Letter to President Obama, 3-27-11

Welcome to the Machine.

To follow events in Darfur and Sudan, go to Mia Farrow's site, it is the real-time journal of a humanitarian at work; the content is compelling, insightful and fiercely independent.