Cate Blanchett as Galadriel in Lord of the Rings 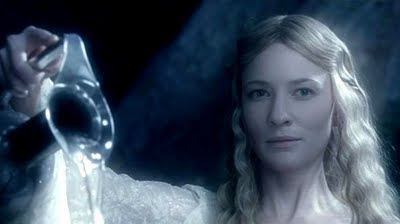 CATE BLANCHETT has dismissed attacks by Tony Abbott and other opponents of a carbon price, saying she will continue to do all she can to tackle climate change. ... Blanchett said she was undeterred. "Everyone will benefit if we protect the environment. There is a societal cost of increased pollution and that's what I'm passionate about as a mother. That's where it gets me in the gut," she said. "I can't look my children in the face if I'm not trying to do something in my small way and to urge other people." Cate Blanchett: I want to be able to look my children in the face, Sydney Morning Herald, 5-31-11

This post to Words of Power is my one thousand and tenth. Several hundred of them have focused on the Climate Crisis. Here is yet another. "Despair," as Thom Hartmann says, "is not an option."

It is love we call out from, and love we must call out to; however it all unfolds.

Yes, and in doing so, officials for the governments of the USA, Russia, Japan, and some of the other great nations, will engage in convoluted, disassembling prevarication. They certainly won't be rejecting an agreement just because it is insufficient or unenforceable. They will simply be rejecting it to protect the short-sight interests of the corporatist overlords who they serve. But consider yourself forewarned, if the great nations fail the future; the future will reciprocate.

Greenhouse gas emissions increased by a record amount last year, to the highest carbon output in history, putting hopes of holding global warming to safe levels all but out of reach, according to unpublished estimates from the International Energy Agency ... The shocking rise means the goal of preventing a temperature rise of more than 2 degrees Celsius – which scientists say is the threshold for potentially "dangerous climate change" – is likely to be just "a nice Utopia" ... Guardian, 5-30-11

The years ahead will require degrees of both self-reliance and collectivity unprecedented in this so-called "developed world." We have little understanding of just how much we have taken for granted, and how deep in denial our societies have become mired. But within your lifetime, and the lifetimes of your children, we will become acutely aware of it all.

The three worst direct impacts to humans from our unsustainable use of energy will, I think, be Dust-Bowlification, sea level rise and ocean poisoning: Hell and High Water. But another impact — far more difficult to project quantitatively because there is no paleoclimate analog — may well affect far more people both directly and indirectly: war, conflict, competition for arable and/or habit. Joseph Romm, Memorial Day, 2030, Climate Progress, 5-27-11

There is powerful medicine for this ailment. It is all around us. It pervades the very Earth we are so badly abusing, it pours down on us from the vastness of the universe.

Desertec is a multi-billion-dollar energy initiative that hopes to meet Europe's energy needs with solar power from the Sahara. The recent upheavals in North Africa have put the project in question. But many experts argue that the Arab Spring will actually help Desertec's grand vision become reality. Der Spiegel, 5-26-11

Of course, many among us are incapable of making a wise choice. They are what I call informationally malnourished. Oh, they are consuming a lot of informational calories, but those calories are quite empty, and also contain spiritually and psychologically carcenogenic elements.

Consider this recent reminder of how much Democracy Now! does with so little, versus how little CNN does with so much.

AMY GOODMAN: Bill McKibben is founder of the grassroots climate campaign 350.org and author of many books, including Eaarth: Making a Life on a Tough New Planet ... Bill, your state [Vermont] is making history today, about to pass single-payer healthcare, and you’ve been doing that quite a while on the issue of the environment, as you travel the world to bring attention to two words that we don’t see screaming across our TV screens. We see "severe weather." We see "extreme weather." We see the horrible scenes of destruction. But we don’t see the words "climate change." Talk about these connections.

BILL McKIBBEN: Sure. Look, what’s happening is we’re making the earth a more dynamic and violent place. That’s, in essence, what global warming is about. We’re trapping more of the sun’s energy in this narrow envelope of atmosphere, and that’s now expressing itself in many way. We don’t know for sure that any particular tornado comes from climate change. There have always been tornadoes. We do know that we’re seeing epic levels of thunderstorm activity, of flooding, of drought, of all the things that climatologists have been warning us about. And of course they’re not confined just to our continent. You know, even in the last week, the Chinese have pointed out that they’re suffering through the worst drought in the center of the country that they have on record. In Colombia, the president went on TV last week to say, "We’ve gotten so much rain in the last year, it’s washed away so much of our infrastructure that it’s as if we haven’t been doing any development work for the last 10 or 20 or 25 years."
The scale of this stuff is immense. And as long as we just think about it as just a series of one-off, isolated disasters, we probably are not asking ourselves the most important questions. What can we do to stop this destabilization before it gets much worse? Democracy Now! Interviews Bill McKibben: From Storms to Droughts, Devastating Extreme Weather Linked to Human-Caused Climate Change, 5-26-11

You can also visit Richard Power author's page at Amazon.com.