Earth's horizon as the sun sets over the Pacific Ocean, the International Space Station. Anvil tops of thunderclouds are also visible. (July 2003) 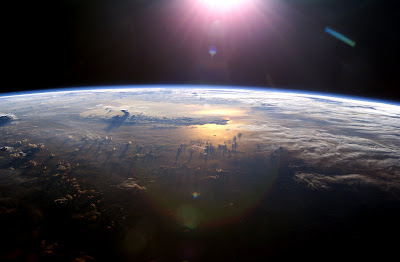 Each life, two-legged, four-legged, winged, slithering, swimming, every life; no more than a thimble of salt water from a undulating, infinite sea of being.

The Unnamable Goddess holds up each of thimble-full; gazing into its contents, She sees countless infinite oceans of being, undulating within every molecule.

When the story is finished, She pours the water back into the ocean from which She drew it; but just as the ocean had not been diminished by the drawing forth of the thimble-full, the story of the thimble's contents is not lost when it is returned to the ocean.

Furthermore, the Unnamable Goddess Herself is only a shimmering vision formed by the shape-shifting waves of that infinite ocean of being, She does not exist in separateness.

At this moment, in this place, you are nothing less than all of this.
Posted by Richard Power at 11:17 PM