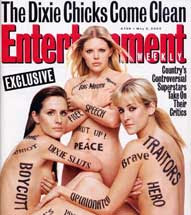 No on-air news media talent resigned in protest over having to utter lies about Iraq, 9/11, global warming, or the stolen elections of 2000 and 2004.

Will any resign over having to utter lies about Iran?

Courageous dissent triumphed at the 2007 Grammys, as it did in the 2006 mid-term elections, but it still has not triumphed inside Beltwayistan or been given its due in the board rooms of the corporatist news media monopolies.

We are at another extraordinary juncture in US history.

A long-awaited report on the veracity of pre-war Iraq intelligence has found that a secretive policy shop exaggerated the Iraqi threat, providing the White House with cherry-picked information about links between Iraq and al Qaeda...The report would appear to confirm British intelligence assertions that surfaced in a document widely referred to as the Downing Street Memo that the facts against the threat posed by Iraq were being fixed around the Bush administration's policy leading up to the invasion of Iraq. Senator Carl Levin (D-Mich.) said the report is a "a devastating condemnation of the activities of the Office of the Undersecretary of Defense for Policy." (Jason Leopold, DoD Report Appears to Confirm Downing Street Memo, Truthout, 2-9-07)

...on MSNBC's Countdown, correspondent David Shuster provided a breakdown on Monday's events at the trial of former White House aide I. Lewis Libby...."There was one other very startling moment, referring to President Bush, in Scooter Libby‘s Grand Jury testimony on audiotape, Libby noted on a piece of paper, a notation, and prosecutors asked whether the notation shows that President Bush was interested in the Kristof article in the State of the Union," Shuster said. "It was a Kristof article in May of 2003 which first got the White House thinking about Ambassador Wilson, because it talked about an ambassador‘s trip, which essentially undercut the State of the Union speech."
Shuster continued, "Libby was asked about the president‘s interest and he said, yes, that‘s what my notes signals, but Libby then went on to testify he never discussed the president‘s interest with the vice president, nor did Libby speak about it with President Bush. He went on to testify that he only heard about the president‘s interest from a senior staff meeting.... David Edwards, 'Startling moment' at Libby trial as President Bush is referenced, Raw Story, 2-6-07

-- we are being led into another war in the same way, by the same mainstream news media and the same political establishment...

As a third carrier group steams toward the Persian Gulf, it is tempting to be drawn into the sounding the alarm on the next chapter of the Bush-Cheney regime's disastrous military adventure in the Middle East, but I have written extensively on this issue of Iran over the last year, and I will leave that story to Juan Cole (NYT Falls for Bogus Iran Weapons Charges) and Eason Jordan (Stop This Now: Nameless Accusers, Sourcing?).

Instead, in this post, I will focus on keeping two other important stories alive.

One concerns the Bush-Cheney regime’s purging of US DoJ prosecutors.

Writing for Salon, Joe Conason explains (what follows is a brief excerpt, please follow the link to Salon and read the full text):

Under any circumstances, the Bush administration's sudden, explicitly political dismissal and replacement of United States attorneys in judicial districts across the country would be very troubling -- both as a violation of American law enforcement traditions and as a triumph of patronage over competence.
But as the story behind these strange decisions unfolds, a familiar theme is emerging. Again, the White House and the Justice Department have been exposed in a secretive attempt to expand executive power for partisan purposes. And again, their scheming is tainted with a nasty whiff of authoritarianism.
There is much more at stake here than a handful of federal jobs...
To ensure that no U.S. attorney could be fired on a whim and replaced with a malleable hack, the relevant statute required that whenever a vacancy occurred in midterm, the replacement would be appointed by federal circuit judges rather than by the president. Getting rid of irksomely honest and nonpartisan prosecutors was difficult if not impossible.
But that wholesome safeguard was breached in December 2005, when the Senate renewed the Patriot Act. At the behest of the Justice Department, an aide to Sen. Arlen Specter slipped a provision into the bill that permitted the White House to place its own appointees in vacant U.S. attorney positions permanently and without Senate confirmation. So silently was this sleight of hand performed that Specter himself now claims, many months later, to have been completely unaware of the amendment's passage.....
On Thursday, the Senate Judiciary Committee voted to restore the old nonpartisan system for replacing U.S. attorneys and to require Senate confirmation of all new appointees. The full Senate and the House of Representatives should do likewise, despite Republican opposition, but that is not enough. The Senate Democrats should continue to probe the attorney general's little coup d'état and all of the resulting appointments. That is the best way to discourage future usurpations -- and to frustrate whatever skulduggery was afoot this time.Joe Conason, Alberto Gonzalez's coup d'etat, The Constitution be damned, the attorney general has seized control of U.S. attorney appointments for partisan purposes, Salon, 2-9-07

But even if both houses of the US Congress act to undo this grievous wrong, what will happen next?

Will W. Jong-il veto the legislation?

Or will he issue a signing statement undercutting it?

And meanwhile, if these purges are allowed to stand — even temporarily — what happens to the evidence, the plea-bargaining and the ongoing investigations that these worthy prosecutors have been developing over the last few years?

Are we getting a glimpse at the most massive obstruction of justice in the history of the republic?

These are the kinds of questions that would have been articulated and amplified in the US mainstream news media twenty or thirty years ago.

Now such vigilance is exercised only by citizen journalists in the alternative media.

Which brings us to the other story I want to highlight here — as I have many times before.

It concerns the US mainstream news media’s shirking of its watchdog responsibilities.

Pressures by media companies to generate ever-greater profits are threatening the very freedom the nation was built upon, former CBS News anchor Walter Cronkite warned yesterday.
In a keynote address at Columbia University, Cronkite said today's journalists face greater challenges than those from his generation. No longer could journalists count on their employers to provide the necessary resources, he said, "to expose truths that powerful politicians and special interests often did not want exposed."
Instead, he said, "they face rounds and rounds of job cuts and cost cuts that require them to do ever more with ever less."
"In this information age and the very complicated world in which we live today, the need for high-quality reporting is greater than ever," he told journalism students and professionals at Columbia's Graduate School of Journalism. "It's not just the journalist's job at risk here. It's American democracy. It is freedom."
Cronkite said news accuracy has declined because of consolidations and closures that have left many American towns with only one newspaper. And as broadcasters cut budgets and air time for news, he said, "we're all left with a sound bite culture that turns political campaigns into political theater."
The former anchor urged owners of media companies - newspapers and broadcast alike - to recognize they have special civil responsibilities.... Anick Jesdanun, Cronkite Warns Drive for Media Profits Poses Threat to Democracy, Associated Press, 2-9-07