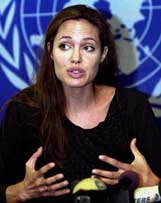 In my five years with UNHCR, I have visited more than 20 refugee camps in Sierra Leone, Congo, Kosovo and elsewhere. I have met families uprooted by conflict and lobbied governments to help them. Years later, I have found myself at the same camps, hearing the same stories and seeing the same lack of clean water, medicine, security and hope.
It has become clear to me that there will be no enduring peace without justice. History shows that there will be another Darfur, another exodus, in a vicious cycle of bloodshed and retribution. But an international court finally exists. It will be as strong as the support we give it. This might be the moment we stop the cycle of violence and end our tolerance for crimes against humanity.
What the worst people in the world fear most is justice. That's what we should deliver. Angelina Jolie, Justice for Darfur, Washington Post, 2-18-07

Those who hunger for freedom, who thirst for human dignity, and who suffer for the sake of justice -- they are the patriots of this cause.
I believe with all my heart that America must always stand for these basic human rights -- at home and abroad. That is both our history and our destiny.
America did not invent human rights. In a very real sense, it is the other way round. Human rights invented America...During this period we may be tempted to abandon some of the time-honored principles and commitments which have been proven during the difficult times of past generations.
We must never yield to this temptation. Our American values are not luxuries but necessities -- not the salt in our bread but the bread itself. President Jimmy Carter's Farewell Address, 1-14-81

Two important developments in the global struggle for human rights:

Luis Moreno-Ocampo, chief prosecutor of the International Criminal Court (ICC) has indicted a Sudanese government official, Ahmad Muhammad Harun (who in an Orwellian twist holds the title of "Minister of Humanitarian Affairs") and a Janjaweed militia leader, Ali Muhammad Ali Abd-al-Rahman -- for crimes against humanity. (Guardian, 2-28-07)

Serious attention and urgent action on both the crisis in Darfur and the "Ten Steps to Restore US Moral Authority" are vital. We must demand accountability at all levels -- from government officials, business leaders, news media executives and ourselves.

Those who live in denial are complicit. They must be made uncomfortable, they must be forced to consciously choose either to endorse genocide, torture and other crimes against humanity or affirm common sense and human decency.

Here are brief excerpts from these stories and links to the full texts:

A Sudanese government minister and a notorious Janjaweed leader have become the first people to be indicted by the International Criminal Court for alleged war crimes in Darfur. Ahmad Muhammad Harun, currently state minister for humanitarian affairs, and militia chief Ali Muhammad Ali Abd-al-Rahman, also known as Ali Kushayb, were yesterday accused on 51 counts of crimes against humanity, including murder, rape and torture, in 2003 and 2004. ICC chief prosecutor Luis Moreno-Ocampo recommended that the men be summonsed to The Hague for trial.
Human rights groups applauded the decision as a step towards ending the impunity in Darfur, where at least 200,000 civilians have died since rebels from African tribes took up arms against the government in 2003...
Leslie Lefkow, the lead author of 2005 Human Rights Watch report that called for war crimes investigations into 22 people in Darfur, called the indictments "an important first step". But she added: "It is vital that the court continues its investigations up the chain of command." Xan Rice, Sudanese minister indicted over Darfur, Guardian, 2-28-07

Congress should adopt a 10-step plan to reverse the Bush administration’s detention and interrogation policies, a coalition of human rights, civil liberties and religious groups said in a letter sent today to the Congressional leadership. First on the agenda is the restoration of access to courts for detainees to bring habeas corpus challenges – the age-old protection against the arbitrary exercise of executive power. Among other things, the coalition also calls on Congress to enact legislation that would stop renditions to torture; permanently ban the use of secret prisons; and prohibit the use in any adjudicative proceedings of evidence obtained through coercion and abusive interrogation practices, including in the newly authorized military commissions.    “For the last five years, the Bush administration has ignored the rule of law,” said Jennifer Daskal, US advocacy director at Human Rights Watch. “It has authorized abusive interrogations, indefinite secret detention without charge, and rendition to torture – all practices Washington condemned when carried out by others.”    Congress should follow the 10 steps laid out in the letter, Human Rights Watch said. Not only is it the right thing to do, but it is good policy – one that would restore the United States’ reputation as a nation that respects human rights and the rule of law.    “The new Congress now has the chance – and the mandate – to right the wrongs of the past five years and restore Washington’s moral authority at home and abroad,” said Daskal.  10 Steps to Restore Moral Authority, Human Rights Watch, 2-22-07

Five Most Recent Posts on Other Human Rights Issues