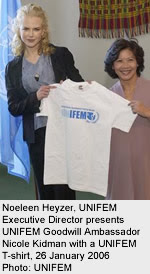 Nicole Kidman...praised a U.N. fund set up 10 years ago for initiatives to end violence against women worldwide, saying it had made a difference in the lives of countless people. Kidman, the goodwill ambassador of the U.N. Development Fund for Women, or UNIFEM, told a gathering of U.N. diplomats via teleconference from Los Angeles that she heard many stories of survival during a tour of Kosovo in October.
She said one woman had been repeatedly raped by soldiers and become pregnant, making her an outcast in her community.
With the help of women's rights activists, though, she testified about the abuse she suffered before the International Criminal Court in the Netherlands, Kidman said.
``Her rape was used as a weapon of war, how it shatters women's lives and communities,'' she said...
Kidman Praises UNIFEM, U.N. Trust Fund, Associated Press, 2-17-07

There is no imperative more vital or more basic than the need to protect women and children from violence and hunger. And yet in the mainstream news media and in the corridors of power these issues are relegated to little more than lipservice and chump change.

But there is a miraculous balm available -- if humanity as a whole, through its international aid organizations, were to focus on addressing the plight of the most vulnerable, the great conflicts would suddenly seem solvable.

Gautama Buddha and Jesus Christ taught a three-fold truth: unconditional love, clarity of mind and the oneness of all life. It is a three-fold truth that they share with shaman and medicine women everywhere and in all times.

The UN Millennium Goals are a path to peace and freedom.

Despite its flaws and its failures, the UN is a beacon of hope.

If you change yourself, you change the world. That maxim is a not an empty platitude, or naive idealism; it is practical magic at its most powerful. And the work of the UN World Food Program and UNIFEM offer excellent opportunities for such change.

Some 18,000 children die every day because of hunger and malnutrition and 850 million people go to bed every night with empty stomachs, a "terrible indictment of the world in 2007," the head of the U.N. food agency said.
James Morris called for students and young people, faith-based groups, the business community and governments to join forces in a global movement to alleviate and eliminate hunger — especially among children.
"The little girl in Malawi who's fed, and goes to school: 50 percent less likely to be HIV-positive, 50 percent less likely to give birth to a low birth weight baby," he said in an interview Friday. "Everything about her life changes for the better and it's the most important, significant, humanitarian, political, or economic investment the world can make in its future." U.N.: Hunger kills 18,000 kids each day, Associated Press, 2-17-07

UNIFEM Goodwill Ambassador Nicole Kidman joined UNIFEM Executive Director Noeleen Heyzer and leading UN officials, including newly appointed UN Deputy Secretary-General Asha-Rose Migiro, in calling for more resources and concerted actions to build on the results of a decade of work by the UN Trust Fund to End Violence against Women.
“We all know in our heads and our hearts that every woman is entitled to a life free of violence. Let’s make that a reality. Let’s end violence against women,” Kidman said at an event commemorating the 10th anniversary of the UN Trust Fund. She made a passionate call for everyone to get involved in ending violence against women: “We’ve come together today to hear the message on taking action to end violence against women. We all have a role to play.”...
Established by the UN General Assembly and managed by UNIFEM, the Trust Fund has given grants amounting to some $13 million to 226 initiatives in 100 countries. Globally, there has been growing recognition that violence against women is a pervasive violation of women’s rights. It affects all societies, extracting a crushingly high cost from individuals and in terms of lost opportunities for social and economic development.
Trust Fund grants address the multiple forms of violence against women, including domestic violence, rape, harmful traditional practices such as female genital mutilation, trafficking, and violence during conflict. Grantees have helped pass and implement strong new laws, provide critical prevention and protection services, ensure women have full access to legal and health care systems, and put violence-related issues on public agendas for discussion and action...
The celebration concluded with a rousing performance by the Brazilian social activist and musician Lica, whose compelling songs on women’s rights and the elimination of violence have made her an increasingly popular artist. She has worked with the organization CEMINA, a Trust Fund grantee that uses radio to deliver positive, socially conscious messages to women. Asked about her position on violence, Lica said: “We never give up. Everyday. Anywhere. When every woman refuses to stay silent, the situation is going to change.” UNIFEM Goodwill Ambassador Nicole Kidman Joins High-Level UN Officials in Calling for More Resources, Actions to End Violence against Women