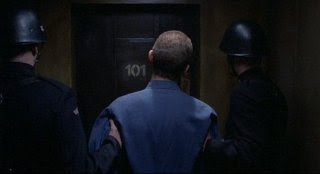 That's what got Winston Smith in trouble.

He wouldn't agree that two plus two equals five -- if the regime said so.

They broke Winston Smith by threatening to leave him alone in Room 101 -- to face his greatest fear...

Or perhaps Smith just told them what they needed to hear so that he could live to fight another day?

Here are four stories that should be at the top of the headlines, but aren't, and the context in which they should be framed.

Remember, as you read this story, that over three thousand US military personnel and hundreds of thousands of Iraqis have died because of the actions of Douglas Feith and those he fronted for:

In a recent interview with conservative radio host Hugh Hewitt, former Undersecretary of Defense Doug Feith attacked Paul Pillar, a 28-year veteran of the CIA who specialized in counterterrorism, for claiming that al Qaeda was not working with Saddam Hussein’s secular regime...
Pillar was right; Feith was wrong. The Senate Intelligence Committee’s Phase II report noted that Saddam Hussein “issued a general order that Iraq should not deal with al Qa’ida.”
Asked to respond to Feith’s attack, Pillar told ThinkProgress:
It is hogwash that community analysts, as Feith alleges, were peremptorily dismissing, or “suppressing,” reporting based on some bias on their part about what was or was not possible in Baathist-jihadi relations. In fact, I can’t think of any recent issue on which the intelligence community has exhaustively devoted more scrutiny — at great expenditure of senior as well as working-level time and attention–than this one of Iraqi-al-Qa’ida relations. I can say that confidently, based on intelligence assessments I read and meetings I attended...
When an intelligence officer responsible for counterterrorism politely pointed out that something Feith had just said (and was recommending as a public talking point) about Iraqi-al-Qa’ida relations was not supported by the intelligence, Feith dismissed my colleague’s point as “nit-picking” and quickly went on to the next subject. It was a don’t-bother-us-with-the-facts- we-have-a-war-to-sell approach. Former CIA Official: Feith’s Claims Are ‘Hogwash,’ He Took A ‘We Have A War To Sell’ Approach, Think Progress, 2-15-07

Remember, as you read this story, that you are being led as far away as possible from Osama bin Laden, and that in the process of taking on Iran, we are going after another one of Bin Laden's enemies (just like Saddam Hussein), and all the while, Al Qaeda, and its sympathizers, are growing stronger. This is madness, if not treason. Well, it is probably both. Those who planned and ordered the attack on 9/11 have still not been captured or killed.

The AP follows up on the assertion in the ISG Report (p. 29 / p. 47 of the .pdf) that funding for the Sunni insurgency comes from private individuals within Saudi Arabia and the Gulf States, even as those governments help facilitate U.S. military operations in Iraq by providing basing and overflight rights and by cooperating on intelligence issues.
Private Saudi citizens are giving millions of dollars to Sunni insurgents in Iraq and much of the money is used to buy weapons, including shoulder fired anti-aircraft missiles, according to key Iraqi officials and others familiar with the flow of cash.
Saudi government officials deny that any money from their country is being sent to Iraqis fighting the government and the U.S.-led coalition.
But the U.S. Iraq Study Group report said Saudis are a source of funding for Sunni Arab insurgents. Several truck drivers interviewed by The Associated Press described carrying boxes of cash from Saudi Arabia into Iraq, money they said was headed for insurgents.
Two high-ranking Iraqi officials, speaking on condition of anonymity because of the issue's sensitivity, told the AP most of the Saudi money comes from private donations, called zaqat, collected for Islamic causes and charities.
Some Saudis appear to know the money is headed to Iraq's insurgents, but others merely give it to clerics who channel it to anti-coalition forces, the officials said...
Several drivers interviewed by the AP in Middle East capitals said Saudis have been using religious events, like the hajj pilgrimage to Mecca and a smaller pilgrimage, as cover for illicit money transfers. Some money, they said, is carried into Iraq on buses with returning pilgrims.
Saudi Private Citizens Funding Sunni Insurgency, Just One Minute, 12-7-06

Remember, as you read this story, that it took more than the debacle in Iraq to dislodge the Cult-Formerly-Known-as-the-Republican-Party from its stranglehold on both Houses of the US Congress; it took aggressive federal prosecutors all over the USA, pursuing corruption in high places. There were more indictments due. What happened to them?

Although the Bush administration has said that six U.S. attorneys were fired recently in part because of "performance related" issues, at least five of them received positive job evaluations before they were ordered to step down.
Attorney General Alberto Gonzales, using authority he gained in March from a little-noticed provision of the Patriot Act, has appointed interim U.S. attorneys from the Bush administration's inner circle. The firings and appointments have raised concerns that Gonzales is politicizing the process.
Supporters of the U.S. attorneys and Justice Department officials familiar with the job evaluations suggested in interviews that top Justice Department officials may have exaggerated the role job performance played in the firings...
Both officials asked not to be identified because they weren't authorized by the Justice Department to release the information....
On Wednesday, Deputy Attorney General Paul McNulty is scheduled to brief senators privately on the reasons for the firings...
Marisa Taylor, 5 Ousted US Attorneys Received Positive Job Evaluations, McClatchy Newspapers, 2-13-07

Remember, as you read this story, that the strength of Western civilization is based on Humanism and Science, and that all civilizations live at the whim of Mother Nature:

Just when people were starting to think that ExxonMobil might be ready to acknowledge its role in global warming, CEO Rex Tillerson showed his true stripes yesterday during a speech at an industry gathering. Mr. Tillerson brought out his collection of broken records and played those moldy oldie skeptic's favorites 'uncertainty,' 'more to learn,' and 'don't go too fast,' revealing that his company really hasn't changed its tune at all and continues its morally reprehensible denial of fact.
Tillerson told reporters attending the speech that he hadn't read the new IPCC report. Yeah right...Meanwhile, ExxonMobil Vice President Ken Cohen spent Monday afternoon on the phone trying to convince a few left-leaning bloggers that the company has always acknowledged global warming and really has just been misunderstood. One of the bloggers on the conference call, MyDD's Matt Stoller, pressed Cohen about the company's lengthy multi-million dollar misinformation campaign to confuse the public. Stoller reports that: "Cohen was shocked when I confronted him, and said 'It's like you think this is a moral issue'. What is wrong with these people?"
Good question. This company's relentless denial is mind-boggling. Tillerson and Cohen have once again demonstrated that ExxonMobil's recent attempts to scrub its image are as hollow as their understanding of the urgent climate crisis. Somebody call a doctor, ExxonMobil is choking on its own hypocrisy. Laurie David, Somebody Call a Doctor, ExxonMobil Choking on Its Hypocrisy, Huffington Post, 2-14-07