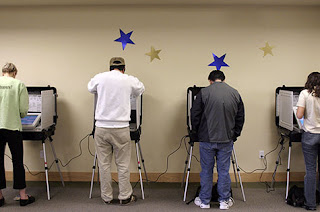 Previously undisclosed documents detail how Republican operatives, with the knowledge of several White House officials, engaged in an illegal, racially-motivated effort to suppress tens of thousands of votes during the 2004 presidential campaign in a state where George W. Bush was trailing his Democratic challenger, Senator John Kerry. Jason Leopold, Truthout, 7-26-07

State-sanctioned teams of computer hackers were able to break through the security of virtually every model of California’s voting machines and change results or take control of some of the systems’ electronic functions, according to a University of California study released Friday. John Wildermuth, State Vote Machines Lose Test to Hackers Francisco Chronicle, 7-28-07

Of course, in a nation where the Fourth Estate has been warped by corporatist monopolization, the body of law perverted by the absurd notion that corporations should have the rights of individuals, and the campaign finance system corrupted with corporatist cash sanctified as free speech, it was only a matter of time before the voting process itself became the target of manipulation and subterfuge.

This realization, which, for me, came in 2000, contributed significantly to the change in my priorities as a writer and a security and risk professional. Knowing what I already knew then about the flawed nature of information security in general and application security in particular, it was clear to me that the nation-wide shift to electronic voting would be disastrous for what was left of our democratic institutions.

There are five important points you should know and share with other concerned citizens about election security in the USA:

2. All makes and models of electronic voting machines currently in use are very insecure, i.e., vulnerable to being hacked.

3. The Holt Bill, which is being touted on Capital Hill, is a placebo; it does not provide a solution to the problem of electronic voting machine vulnerabilities, and it is being pushed, in part, by software industry lobbyists to cover the asses of their clients (e.g., Microsoft) in a broad range of other applications.

4. The only real solution to the problem is to pull out the machines, return to the paper ballot, and, beyond that, to institute the same standards we demand in internationally supervised elections around the world.

5. There are other unethical and illegal methods being utilized to manipulate US elections, including, e.g., "caging." Investigations into such activities are ongoing, and if it were not for the politicization of the DoJ over the last several years, these investigations alone would have brought down many people in high places.

It took PBS several years to catch up with the BBC on the caging issue.

When will the leadership of the Democratic Party accept these painful truths? Their failure to press the issue aggressively only reinforces the conviction that their resistance to the reich-wing takeover, if not faux, is at best, half-hearted.

We cannot afford to allow the 2008 election cycle to commence without acute awareness and meaningful action at the national level.

Words of Power continues to follow this issue, and report on major developments. To view a directory of all Words of Power posts on the theft of the US and Mexican presidential elections, click here.

To follow these issues more closely, turn to Brad Blog, Mark Crispin Miller's Notes From The Underground, and Greg Palast.

Here are excerpts from two stories on important developments on the technical and investigative aspects, with links to the full texts:

Open Letter to CA Secretary of State Bowen
By Rebecca Mercuri
Dear Secretary of State Bowen,
At a cost of $1.8M, you now have various reports http://www.sos.ca.gov/elections/elections_vsr.htm that confirm that all of the State's Hart, Diebold and Sequoia DRE and OpScan voting systems can be hacked in various ways. Potential hacks include the all-important ability to have a VVPAT print out one thing and the DRE total reflect something else (thus rendering the VVPAT useless) as well as the capability of detecting election mode (thus enabling the pre-election testing to appear correct, while the actual election has been compromised). All of these are types of hacks that many knowledgeable people (including myself) have been publicly saying for years could happen, and now you know that for sure they can. In addition, you know that "the security mechanisms provided for all systems analyzed were inadequate to ensure accuracy and integrity of the election results" and you also have learned that all of your State's voting systems fail to meet the Federal accessibility requirements.
Unfortunately, the report also provides you with a fall-back position whereby these wretched election products can continue to be used -- by claiming that many of the attack scenarios can be mitigated through better physical security, security training of staff, and contingency planning. Of course the report fails to really explain what those mitigations need to be, and it also omits mentioning that if the staff or the vendor happens to be corrupt and their contingency plan is to cover up their tracks, we now know for sure that fraud is certainly possible. ...
Here's a novel thought: why not just get rid of the junk the voting system vendors have sold your gullible counties over the past few years, demand a refund, and let your citizens vote on paper and do the counting themselves? ...
Rebecca Mercuri, Ph.D.
Authors Website: http://www.notablesoftware.com
Authors Bio: Rebecca Mercuri has been in the forefront of the voting integrity movement since 1989. She provides expert witness services for elections and other forensic computing matters. Open Letter from Rebecca Mercuri, Notes from the Underground, 7-27-07

Was there a White House plot to illegally suppress votes in 2004? Is there a similar plan for the upcoming elections? This week NOW examines documents and evidence that points to a Republican Party plan designed to keep Democrats from voting, allegedly by targeting people based on their race and ethnicity with key battleground states like Ohio and Florida of particular interest. "It was a partisan, discriminatory attempt to challenge voters of color," Eddie Hailes, a senior attorney for The Advancement Project, a civil rights group, told NOW.
Was the White House involved? David Iglesias, one of the fired U.S. Attorneys, thinks so: "It's reprehensible. It's unethical, it's unlawful. It may very well be criminal." Iglesias told NOW he was repeatedly urged by his superiors at the Justice Department to investigate allegations of false voter registrations. After his investigations came up short, Iglesias said Republican officials got angry and complained to White House aide Karl Rove. Soon after Iglesias lost his job. As a result of allegations by Iglesias and others, Congress is investigating whether the White House acted unlawfully. PBS Now, 7-27-07


Richard Power is the founder of GS(3) Intelligence and Words of Power. His work focuses on the inter-related issues of security, sustainability and spirit, and how to overcome the challenges of terrorism, cyber crime, global warming, health emergencies, natural disasters, etc. You can reach him via e-mail: richardpower@wordsofpower.net. For more information, go to www.wordsofpower.net