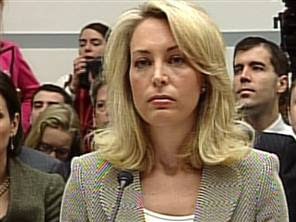 The story was, is, and will remain about the betrayal of a US secret agent's identity in an attempt to harm that agent and her husband directly, and to intimidate other whistleblowers and squash further dissent in government.

Beyond that, I have nothing to say that is printable.

I encourage you to donate to the Joseph and Valerie Wilson Legal Support Trust, so that truth and accountability can be better served than they have been so far.

For the sake of the ongoing timeline, here are some remarks which put Bush's action in its proper context.

We comment only on the statement in which the President termed the sentence imposed by the judge as “excessive.” The sentence in this case was imposed pursuant to the laws governing sentencings which occur every day throughout this country. In this case, an experienced federal judge considered extensive argument from the parties and then imposed a sentence consistent with the applicable laws. It is fundamental to the rule of law that all citizens stand before the bar of justice as equals. That principle guided the judge during both the trial and the sentencing.
Although the President’s decision eliminates Mr. Libby’s sentence of imprisonment, Mr. Libby remains convicted by a jury of serious felonies, and we will continue to seek to preserve those convictions through the appeals process.
Think Progress, 7-2-07

Wilson -- who is pursuing a civil suit against Libby, Karl Rove and Vice President Dick Cheney -- called on Bush and Cheney to release the transcripts of their interviews with Special Prosecutor Patrick Fitzgerald "to let the American people know what they knew and when they knew it." If not, Wilson says, "Congress should hold hearings on the president's role in the obstruction of justice."
Wilson: "From my viewpoint, the president has stepped in to short circuit the rule of law and the system of justice in our country. In so doing, he has acknowledged Mr. Libby's guilt for, among other things, obstruction of justice, which by definition is covering up for somebody in a crime. By commuting his sentence, he has brought himself and his office into reasonable suspicion of participation in an obstruction of justice. The commutation of (Libby's) sentence in and of itself is participation in obstruction of justice."
Asked if he expected Bush to pardon or commute Libby's sentence, Wilson replied, "I have never known what to expect. The administration is now trying call this compromise. At end of day, it's allowing a neoconservative cult to engage in special pleading. … This from the president who refused to listen to the Pope's clemency appeals over the execution of first female prisoner in Texas since the Civil War," referring to the 1998 execution of Karla Faye Tucker while Bush was governor.
TPM Muckraker, 7-2-07

The President’s commutation of Scooter Libby’s prison sentence does not serve justice, condones criminal conduct, and is a betrayal of trust of the American people.
The President said he would hold accountable anyone involved in the Valerie Plame leak case. By his action today, the President shows his word is not to be believed. He has abandoned all sense of fairness when it comes to justice, he has failed to uphold the rule of law, and he has failed to hold his Administration accountable.
The Gavel, 7-2-07