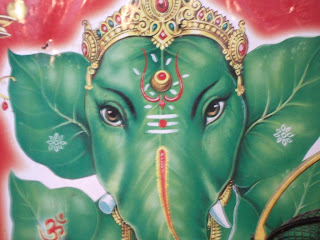 Earlier this week, in Hard Rain Journal 7-11-07: Air America's Mike Papantonio Exposes Discovery Institute, the Wedge Document and the Fraud of "Intelligent Design", I drew your attention to one aspect of the danger of religious extremism in the USA.

Unfortunately, here is another story that compels me to touch the third rail of religion in politics.

I am not a Hindu devotee, but as a life-long student of religion, philosophy and mysticism, I cherish its beauty and depth.

First of all, Hinduism is not even its name.

That's the name the British colonialists gave it during their days of empire.

"Hindu" simply means someone from the area of the river Hind.

But Sanātana Dharma is a rich, sophisticated and inspiring tradition.

It is disturbing enough that it has taken over two hundred years for a Hindu prayer to be uttered as the morning invocation for the US Senate.

It is hard to imagine why all of the world's major religions traditions have not already been honored in this way. (There are only a few -- e.g., Buddhism, Christianity, Islam, Judaism, Sikhism, Bahai, Hinduism -- and all of them are reflected significantly in the population of the USA.)

But as this omission was being rectified, something even more disturbing occurred.

Three reich-wing "Christian" extremists from "Operation Save America" stood up in the gallery and disrupted the beautiful moment. They shouted “Lord Jesus, forgive us father for allowing a prayer of the wicked, which is an abomination in your sight.” (Think Progress has the video.)

Both their action and the group's subsequent press release exhibited a profound ignorance not only of Hinduism, but of their own religion (Jesus was the personification of tolerance and open-heartedness) and of the Founding Fathers (e.g., George Washington, Thomas Jefferson, Tom Paine, Benjamin Franklin and others) who were largely Deists and Masons, and very definitely not Christians.

But were the disrupters doing something more than venting hate?

Were they also issuing an implicit threat to the members of the US Senate, and by extension to all of us? Where they really saying, "Our side shoots doctors, and you can get shot too."

Remember Tim McVeigh and Eric Rudolph. There are more of them out there.

If we succeed in turning the USA away from this accelerating descent into de facto theocracy, the McVeighs and Rudolphs will get desperate and lash out.

If we do not succeed, and the USA continues to increasingly become a so-called "Christian Nation," they will become emboldened and even more bullying.

Either way, there is trouble ahead.

Leadership must shown at all levels of our society. We must cultivate tolerance and diversity in all walks of US life and all avenues of US culture. We must reaffirm the separation of Church and State in the US body politic.